“Ain’t gonna let nobody turn us around"

Hard work and heartfelt testimony by young people and their allies broadened support for Free Muni for Youth among the members of the Metropolitan Transportation Commission (MTC)—but MTC still wasn’t ready to fund a project that mainly benefits low-income youth and youth of color. The Commission rejected a proposal to allocate $4 million to the Free Youth Pass pilot program by a vote of 8 to 7 at its July 25 meeting. Commissioners from San Francisco, the Peninsula and the South Bay backed the program, while East Bay and North Bay representatives opposed it.

Youth from POWER (People Organized to Win Employment Rights) responded to the vote with an unscheduled public comment, filling the room with chants of “Spread the word, spread the truth/Free Muni for all our youth!” and “We’ll be back!” before leaving the building.

Around 70 youth and supporters from all over the Bay Area attended the Wednesday morning MTC meeting. On the steps outside the agency’s headquarters after the vote, San Francisco Supervisor David Campos put the events in perspective.

“This is part of a process,” said Campos, who has championed the free Youth Pass in San Francisco and represents the city on the MTC. “Three months ago we had three votes. Today we had seven. Keep fighting!” 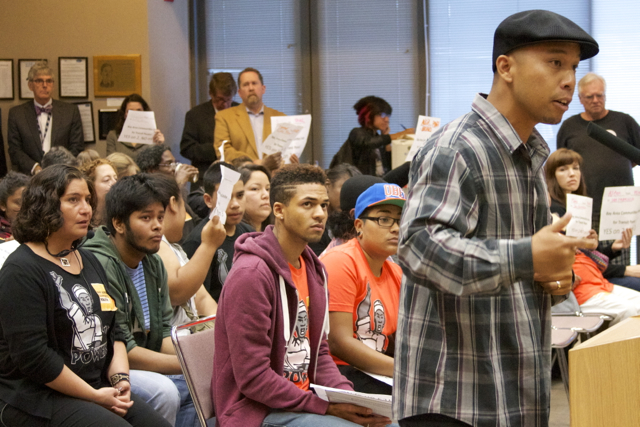 The Commission had deadlocked on funding the Youth Pass at its June meeting. Its Programming and Allocations Committee met July 11 and again sidestepped a decision, forwarding the issue to the full Commission.

“Having watched the MTC for a long time, I’ve never seen this level of scrutiny for such a relatively small expenditure,” said Urban Habitat Transportation Justice Program Director Bob Allen.

The money for the Free Muni pilot program would come out of “Climate Initiative” funds, which are earmarked for innovative projects to slow climate change. Allen noted that in the most recent funding cycle, almost $13.5 million in climate moneys went to projects involving electric cars—with far less discussion over whether those projects had secure sources of future funding. “We’re looking at a clear double standard,” Allen said.

The Commission didn’t vote on any alternative expenditures, so the funds that would have gone to Free Muni are still available. The vote left Youth Pass advocates shaking their heads. 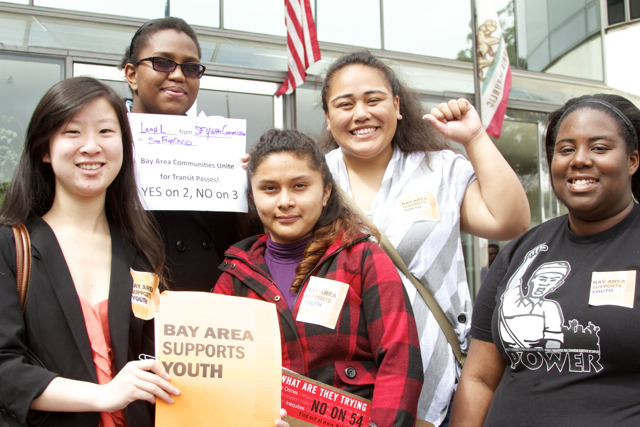 The route gets a little longer for Free Muni for Youth

“The Free Muni for Youth program had evaluation and education built in. Even MTC staff agreed that it would help build the next generation of transit riders,” said San Francisco Youth Commissioner Huimin “Happy” Yang. “It seems to be a perfect use of climate funds, and it prioritizes the needs of low-income communities and communities of color. That’s why I didn’t quite understand why some MTC Commissioners said they are ‘not ready for it’,” Yang said.

Free Muni for Youth advocates hoped to secure the MTC funding in time for the start of the new school year. Deep cuts in yellow school bus service and the sharp rise in the price of Muni’s Youth Pass make the need all the more urgent—so youth and their families are determined to keep up the fight.

“Part of the advocacy process is not to lose conviction in what we believe is right for our community—and that is to provide free public transit for our low-income youth, said Eric Wu of the Adopt-An-Alleyway Youth Program. “We will overcome the resistance we're facing and will not be faltered by the outcome of this vote," Wu said.