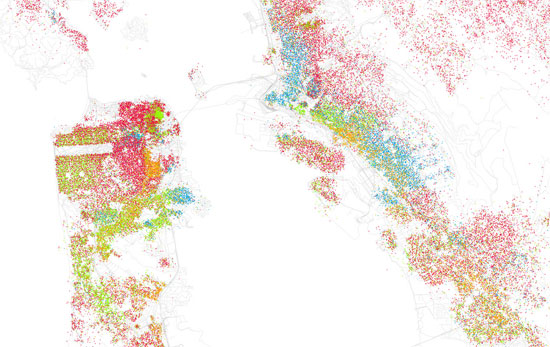 When is a map worth a thousand words? Bill Rankin, who maintains a website called Radical Cartography, has generated buzz with his racial and income maps of Chicago, which can test stereotypes Chicagoans have about the boundaries of their neighborhoods.

Rankin notes, for instance, that the boundaries of neighborhoods are always drawn as stark lines on informational maps, yet people in cities traversing their communities don’t always delineate the end of their neighborhood by the same streets (some streets, like Houston Street in New York City or Cesar Chavez Street in San Francisco, however, tend to mark a consensus change in neighborhood for those living near them).

Rankin found when he used dot mapping (one dot represents 25 people, for instance), the demographics can both reinforce those boundaries and blur them.

“There are indeed areas where changes take place at very precise boundaries… and Chicago has more of these stark borders than most cities in the world,” writes Rankin on his website. “But transitions also take place through gradients and gaps as well, especially in the northwest and southeast. Using graphic conventions which allow these other possibilities to appear takes much more data, and requires more nuance in the way we talk about urban geography, but a cartography without boundaries can also make simplistic policy or urban design more difficult — in a good way.”

Environmental justice, a movement to focus attention on pollution in low-income communities, is a burning cause for Lisa Jackson, the first African American to head the U.S. Environmental Protection agency.  Over the last several months, Jackson has toured poor white, black and Latino communities with a message: Eco-issues aren't just for rich folks.

On Saturday, the EPA chief took a bus tour of low-income neighborhoods in the San Francisco Bay area, stopping at a Superfund site where the federal government is coordinating toxic chemical cleanup, and an urban food cooperative. 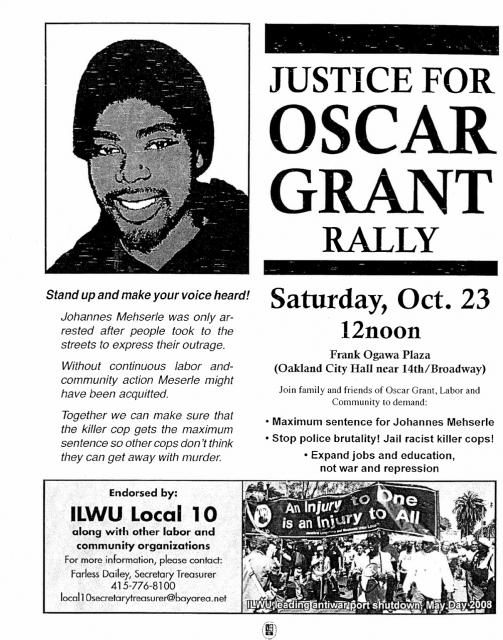 What: Rally for justice for Oscar Grant

Oscar Grant was shot in the back by BART Policeman Johannes Mehserle while lying face down on a BART platform. Mehserle will be sentenced on November 5th and we need to get out on the 23rd to show the sentencing judge that we mean business. It took video evidence AND a massive outpouring in downtown Oakland to even get the District Attorney to charge Mehserle. It will take people in the streets to get the killer cop jailed. 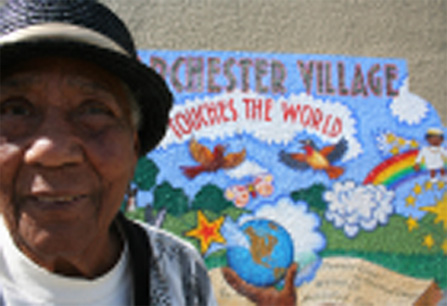 Like many African American families, Mary “Peace” Head and her brood migrated to the Bay Area from Louisiana just before WWII in search of work and opportunity.

She would go on to work as a welder in the Richmond shipyards during the war. Head, who is now 83, later became one of the early residents of Parchester Village.  She’s been a leader in this small housing development since the 1950s, playing an instrumental role in securing funding for a neighborhood community center and acting as a quasi-guardian to generations of local kids.

She is called “Mary Peace” by neighbors and others throughout the city, a name she earned by flashing her customary “peace sign” with her right index and middle fingers.

In 1950, Parchester Village, named for wealthy developer Fred Parr, opened on land beyond the border of northwest Richmond.

It was billed as a community for “All Americans,” but the idea was ahead of its time.
Richmond
Housing & Homelessness (News)
Race & Racism (News)
Tweet
Source:
SF Weekly 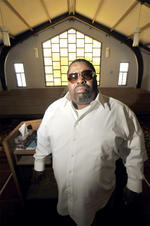 In San Francisco, a battle starts every morning on a street corner in the Bayview, where a crowd of people gathers around a white pickup. On a Thursday in June, there are about 15 people there, mostly black men, with a handful of women and Latinos. They're waiting for James Richards to give them the morning pep talk. He calls it "the breakfast of champions."

Richards is a big man in his 60s, eyes inscrutable, though seldom seen behind his sunglasses. There's a marijuana bud on his gold front tooth. In conversation, Richards' voice can be soft, his responses vague. But when it's time to make a speech, he can preach social justice with the fire of a Civil Rights–era crusader, railing against chickenshit unions and lying politicians."What I hear," Richards begins, slowly, "is you all were acting like real warriors."

Richards is the leader of the Aboriginal Blackmen United, a group that's part direct-action organization, part job placement agency, and all business when its members think employers are abusing their right to work. Its only headquarters is this street corner in front of the Double Rock Baptist Church. Nearly everyone here, including Richards himself, is jobless — not surprising in a neighborhood where the unemployment rate during the Great Recession is thought to be 50 percent higher than that of the rest of the city, and an estimated one in every 3.5 African-Americans is out of work.

Jobs (News)
Race & Racism (News)
Tweet
Source:
New America Media
SAN FRANCISCO -- Ethnic Californians are at the forefront of support for environmental policies in the state, according to a new poll released last week by the Public Policy Institute of California (PPIC).

The poll, which asks state residents their perspectives on a wide range of environmental issues, found that ethnic Californians were more likely than whites to perceive air pollution and climate change as serious threats, and favor a role for government in fixing the problems. The survey was conducted in English, Spanish, Chinese (Mandarin and Cantonese), Vietnamese and Korean.
California
Environmental Health (News)
Race & Racism (News)
Tweet
Source:
California Progress Report
By Aaron Glantz
New America Media

Is BART the most racist transit agency in the nation?

That’s a question Bay Area residents should be asking after the U.S. Justice Department announced Friday that it was opening an investigation into the transit agency’s handling of BART police officer Johannes Mehserle’s fatal shooting of Oscar Grant. The investigation, which the Justice Department confirms is being launched together with the FBI and the U.S. Attorney’s Office in San Francisco. But it is not the first effort by the Obama administration to rein in BART over civil rights.