Mountain View took a major step Tuesday toward transforming its most famous business park, as officials began discussions of where housing should go and what it should look like in the city’s red-hot North Bayshore.

emailaddress:
ndonato-weinstein@bizjournals.com
In accordance with Fair Use posted for educational and research purposes only. This article does not originate from RP&E or Reimagine!

Park Oakland loses a $1 billion a year to other cities, and without redevelopment, the city's plans for a major shopping district in Upper Broadway may be history.

Glenda Barnhart and her partner Clay Wagers dreamed of opening a bicycle shop. In 2008, as the economic meltdown started to spread nationwide, she feared that she would lose her income as a consultant and noticed that a bike shop was for sale around the Valdez Triangle. She took one look at bike shop and walked out. The area also known as Upper Broadway — failing auto dealerships, vacant storefronts, desolation — reinforced the thought it would be a horrible idea to buy that shop.

Six months later, Barnhart noticed the bike shop was still for sale. But this time she saw signs that the area was springing back to life. The nearby Whole Foods on 27th and Harrison streets had become a vibrant attraction for area shoppers. Condos were popping up close by, new restaurants were opening, and a nascent art community was blooming. It was time, she concluded, to buy that shop — Bay Area Bikes. "If we do this now," Barnhart recalled thinking, "we will be getting on the ground floor of something big. It was my dream to retire and do what I love."

OAKLAND, Calif. - A new chapter opened Feb. 7 in the long saga of efforts to redevelop the former Oakland Army Base, as the City Council approved guiding principles to assure Oakland residents priority for construction jobs and for the warehouse and goods movement jobs that are to follow.

The base is especially important to the city's economic life because it is next to the Port of Oakland, the nation's fifth busiest port, in a working-class area where unemployment is high.

Agreement on the provisions came after years of discussion, and a nine-month process that brought together labor, community members, environmentalists and the business community, with Councilmember Jane Brunner playing a major role. Participating in the discussions was the 30-organization Revive Oakland! coalition of clergy, workers, youth, and neighbors from West and East Oakland.

Besides construction jobs, the project is expected to create some 2,500 to 3,000 permanent jobs. 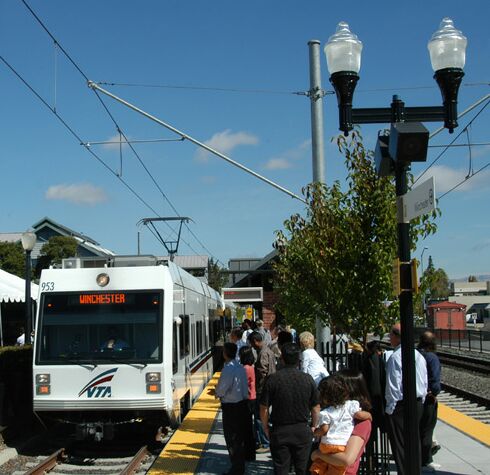 This film series explores how sprawl replaced traditional neighborhoods and what can be done to bring back community and sustainability to our cities and towns. The Films start at 7 PM, Laurel Room, Sunnyvale Community Center, 550 East Remington. Doors open at 6:45. FREE.

May 6: Save Our Land, Save Our Towns (1 hr)
Small town newsman Tom Hylton explores why America's towns have declined and what we can do to revive them. Philadelphia Daily News praises, “Development and zoning issues normally make the eyes glaze...Tom Hylton makes them downright fascinating."
www.saveourlandsaveourtowns.org/video.html

-
May 13: Creating Places We Want to Live
Portland: A Sense of Place (Design e2 Episode) (30 minutes) 2008
Thanks to a progressive public transportation portfolio that includes train, streetcar, bus and aerial tram, Portland has become one of the most livable cities in the US.

Community by Design (26 minutes) 1997
Learn about the key role that design plays in building community from some leading progressive thinkers on the subject.
www.bullfrogfilms.com/catalog/wwl3.html