As much as the Bay Area prides itself on diversity, it celebrates its role as the environmental conscience of California and the nation.  There is indeed a record deserving of praise, including dynamic political leaders who have fought for higher state and national standards, remarkable efforts by organizations and governments to protect open space, and a general sense pervading the populace that recycling, mass transit, and compact living really is the wave of the future.

But the area is also plagued by urban environmental inequities often overlooked by enthusiasts of the natural environment. Neighborhoods with the least toxic emissions from nearby industry are about 56 percent white; those with the most toxic emissions are nearly 66 percent people of color.  The Bay Area essentially faces a “Tale of Two Corridors:” the communities bordering I- 280 up the peninsula have a low risk of air-related cancer and other illness while those bordering I-880 up the East Bay have well-documented toxic risks and higher rates of asthma (Map 3). 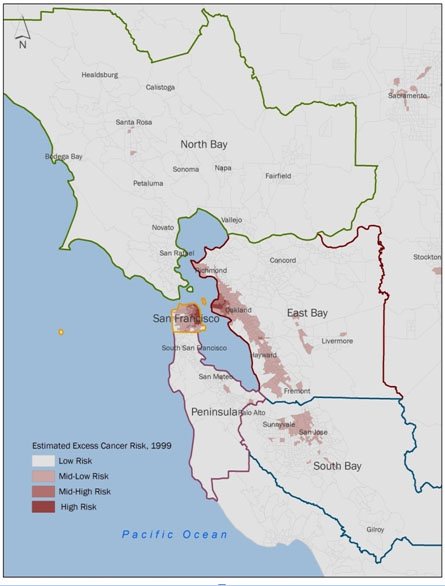 And climate risk is imminent as well: research shows that when temperature rises, low-income communities of color are the least prepared in terms of air conditioning, transit, and other resources to beat the heat.  The San Francisco Bay Conservation and Development Commission (BCDC) has analyzed the threat of potential sea-level rises and identified the following at-risk low-income communities: Canal Zone in Marin County, San Pablo, parts of Richmond, Vallejo, West Pittsburg, parts of Pittsburg, and Alviso near San Jose.

Ironically, those to bear the consequences are not those who have caused the most harm.
Analysis (and now state policy) suggests that the principles of Smart Growth – denser housing, closer proximity to transit, and neighborhood-centered retail – can reduce reliance on cars and reduce the overall carbon load from fossil fuels.  While the Bay Area is moving slowly in this direction, the communities of color are already denser – the densest fifth of the Bay’s neighborhoods are more than two-thirds people of color while the least dense fifth are two-thirds white people.  People of color are also carrying more of the weight of climate protection in terms of transit: they use public transit at far higher rates (60 percent) than do whites (Figure 7).

These minority transit users are not always rewarded for their good behavior.  Minority riders tend to ride buses more than rail and Public Advocates has argued that riders of BART get nearly twice the subsidy of AC Transit riders in the East Bay.
Their analysis suggests that operators that serve a larger minority population struggle to break even more than other operators.  For a society that is supposed to value markets, we seem to have the incentives all wrong. 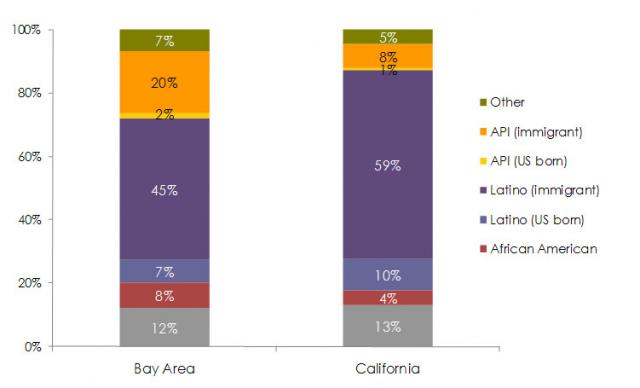 So we need to change – but we also need to get change right.  An emerging challenge is the affect of policy regulations on the jobs of minority workers and minority communities.

It’s true that communities of color are the most susceptible to climate change risk and thus would have a great deal to gain from effective mitigation.  However, workers of color are disproportionately employed in industries that heavily emit carbon and will likely face cutbacks.  These industries are more unionized and pay higher wages, and so new policies that might help their neighborhoods, could hurt their wallets. We need to have adjustment and assistance plans in mind, particularly because the state’s economic models seem to underestimate the degree of adjustment that will occur.

Another problem emerges from the cap-and-trade approach likely to be taken by the State to reducing greenhouse gas emissions.  Cap-and-trade is inherently unequal: the cap affects and benefits everyone but the trade by definition produces uneven reductions (or else why would you trade with someone else?).  Geographically disparate declines in carbon might not be an issue.  But uneven shifts in associated particulate matter and air toxins, known as co-pollutants, would have local and adverse health impacts.  No one has been able to perfectly predict impacts, but what we do know, based on the current pattern of environmental inequity in the Bay, leads us to be concerned about possible racial and class disparities in protecting health.

But there is a silver lining that could eclipse the cross-cutting environmental challenges.  The Bay Area, after all, is well-situated to benefit from a new, greener economy and society.  We have venture capital and a workforce ready to go if we can ensure training and placement pipelines. We have a healthy level of public transit use and more riders in line if only we can get the incentives steered back to the low-income riders who need it most.  We have the sort of compact living associated with Smart Growth and more to come if only we establish standards to keep long-time and low-income residents in place, holding back gentrification.