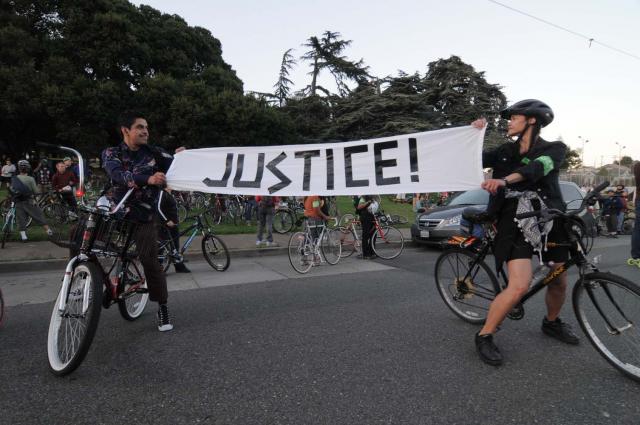 In July 24, 2010, an estimated 300 cyclists took to the streets for the third annual Bikes 4 Life Peace Ride. The approximately 10-mile circuit took the riders through the streets of Oakland—around Lake Merritt, down International Blvd, past the Fruitvale BART station (where a candlelight vigil was held for Oscar Grant), and back to West Oakland. As the cavalcade passed through neighborhoods people cheered and motorists honked. The Peace Ride illustrated some of the best qualities of what has become known as the urban bike movement. It’s one thing to get on a bicycle and go for a ride, and quite another to share that experience with a large group of people from diverse ethnic, social, and economic backgrounds. There is strength in numbers and a palpable power in hundreds of cyclists essentially reclaiming public space while raising awareness about transportation, public safety, social justice, non-violence, and environmental issues.

From Organic Revolution to Critical Mass
The Urban Bike Movement began in San Francisco in 1993 after five cyclists had been struck and killed by motorists in one month. A small group of riders organized a memorial ride, which soon became a monthly occurrence. As word got around, more cyclists began showing up every month. Soon the number had grown to 500—large enough to draw the attention of CNN, which aired a segment about the “bike messenger protest.” The following month, almost 1,000 riders showed up.

Within a year the rides, which came to be known as the Critical Mass, were emulated in Chicago, Manhattan, Washington, D.C., London, Paris, and Copenhagen. Today, “there’s a Critical Mass in pretty much every major city around the world that has urban biking issues,” says Brian Drayton, a veteran “biketivist.” 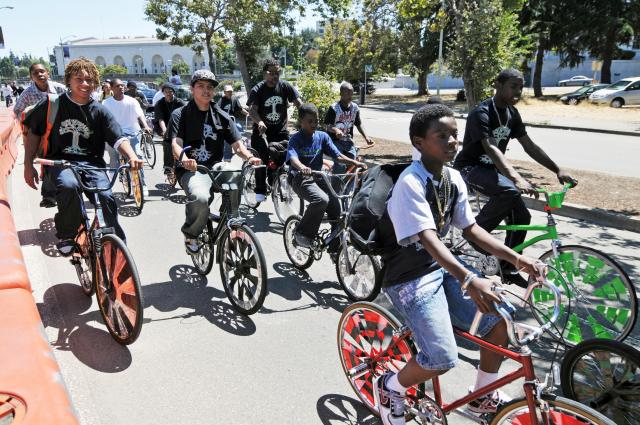 In San Francisco, the city tried to shut down the movement a number of times, says Drayton. “[Until] they realized that it wasn’t organized by any one person. It was just an organic thing… there had never been a movement that had no central organizing body, and they couldn’t figure out how to corral us.”

The East Bay now has a 20-mile loop of bicycle trails that is virtually auto-free, linking the Bay Trail from Emeryville to Richmond, with the Ohlone Trail through the Greenway, which attaches to Berkeley’s bicycle boulevards and to Oakland. Future plans to open up the Bay Bridge to cyclists will eventually connect the East Bay to San Francisco—without the expense (and pollution) associated with public transportation and vehicular traffic.
In 2009, Drayton launched another nonprofit, Richmond Spokes, which combines biking with urban youth development. Mobility is a major issue for urban and inner-city youth, Drayton says, one which affects their perception and worldview. “Richmond is really unique because it’s contained by freeways and railroad tracks,” he points out. “You have kids that are actually stuck in their neighborhood because of the violence... also because of geographic barriers.”

Without access to transportation, inner-city youth do not get to experience other communities, other cultural events. Yet, something as simple as riding a bicycle can actually get them out of their situations. “Bikes,” Drayton emphasizes, “save kids’ lives.”

Riding for Peace and Justice
Tony Coleman, founder of Bikes 4 Life and a longtime community organizer, started the Peace Rides in 2008 when he noticed more young people of color cycling—not just the fixed-gear hipsters, the bike commuters, the fitness folks, and the triathletes who generally constitute the cyclist population.
Nonviolence is a prominent theme of the Peace Rides but not the only one. “Poverty is violence and we want to stop that,” says Coleman. Moreover, urban cyclists see themselves as contributing to reducing pollution. Also, the Peace Rides engage folks who, according to Coleman, “may not have thought about being political, but wanted to come out for a ride.”

In January 2010, Coleman opened the B4L shop in West Oakland, which serves neighborhood residents by selling affordable, quality used bikes and offering repair services. Alongside the typical array of bikes and bike paraphernalia, B4L displays a distinct hip-hop flavor and a strong commitment to justice as reflected in the posters from activist campaigns dating back a decade, plus a colorful, spray-painted tapestry of Oscar Grant’s face hanging from the rafters. 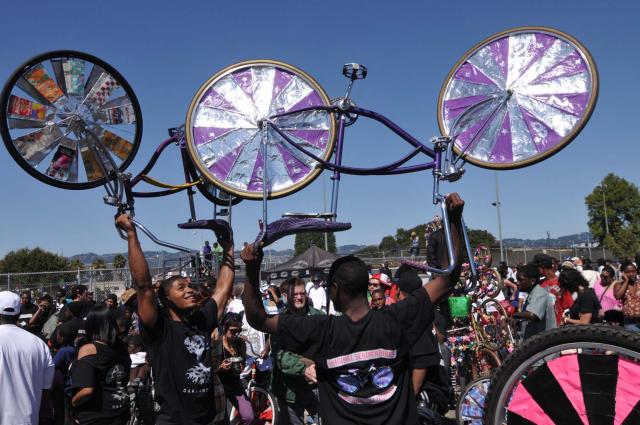 With the food justice-oriented Revolution Café next door, B4L has become a hub for networking around progressive causes and has helped to build unity in the community, according to Coleman. “We’re actually creating jobs. We actually have a green business!” he points out.

Richmond Spokes also has created green jobs for youth, providing bike valet services for public events in Richmond and Oakland. “We have legislation in Oakland where if you’re having an event which has more than 5,000 people, bicycle parking is mandatory,” Drayton explains. This fall, he hopes to open a retail and repair shop furthering Richmond Spokes’ mission of teaching youth entrepreneurship, bike safety, and eco-sustainability.

As the Urban Bike Movement’s momentum grows, so does solidarity between organizations—and a sense of community empowerment. “[The movement] allows individuals to share common space and build communities using the limited resources that we have—our bikes,” says Jenna Burton, founder of Red Bike & Green, an Oakland-based Afrocentric cyclist collective established in 2008 (current membership is about 150). “Bikes have become the vehicle through which we are able to actively address issues of health, environment, and economic disparities that affect our communities... the Urban Bike Movement is one of the few spaces where you will see intergenerational fellowship; the end result is a very uplifting and beneficial experience.”

Scraper Bikes: A Movement of Their Own
A less overtly political but equally uplifting branch of the bicycle movement is the Scraper Bike phenomenon—a brainchild of 21-year-old Tyrone “Baybe Champ” Stevenson, a budding entrepreneur and hip-hop artist.

Scraper Bikes—defined by the Urban Dictionary as “a customized bicycle featuring oversized wheels, foil-encased spokes, and a spray-painted frame”— have become tremendously popular among youth in the streets of East Oakland, where Stevenson leads rides with up to 40 kids at a time.
The Scraper Bikes movement, which has been developing for almost a decade, came out of a desire to avoid the cycle of drugs, crime, and violence plaguing the ghetto, as well as a need for youth to create something that’s their own, according to Stevenson. “Bicycling,” he adds, “is healthy, it keep[s] the environment clean, and it’s exercise. At the same time, you could be riding around in style, get some music going on it.”
This unique form of transportation has also attracted considerable attention outside the ‘hood because of a YouTube video by Stevenson’s rap group Trunk Boiz that has gone viral. Now people from as far away as Japan and Australia are reportedly making their own Scraper Bikes. Media attention has come from the likes of the Huffington Post, NPR, and The Ride, a cycling magazine from the U.K. Also, the Original Scraper Bike (OSB) team has exhibited at D.I.Y. extravaganza Maker Faire over the past two years.

Stevenson calls Scraper Bikes a lifestyle as well as a way to teach life skills. OSB team members must adhere to certain strict criteria—among them, maintaining a minimum 3.0 GPA and following safety guidelines. Oakland’s Parks and Recreation department is working with Stevenson to hold workshops around public safety, in addition to hosting block parties with Roots & Branches, a youth-centric nonprofit that uses hip-hop culture to promote positive social change.

According to Nicholas Basta, founder of Roots & Branches, Scraper Bikes are “making bicycling cool for young people.” By customizing their wheels and tricking-out their rides, urban youth from eight to twentysomething are literally taking transportation issues into their own hands. Or as the Trunk Boiz put it: My scraper bike go hard/I don’t need no car.

Eric K. Arnold is a freelance writer and photographer. He has been documenting hip-hop and youth movements since 1994.

END_OF_DOCUMENT_TOKEN_TO_BE_REPLACED
The Earth Is the Only One Telling the Truth