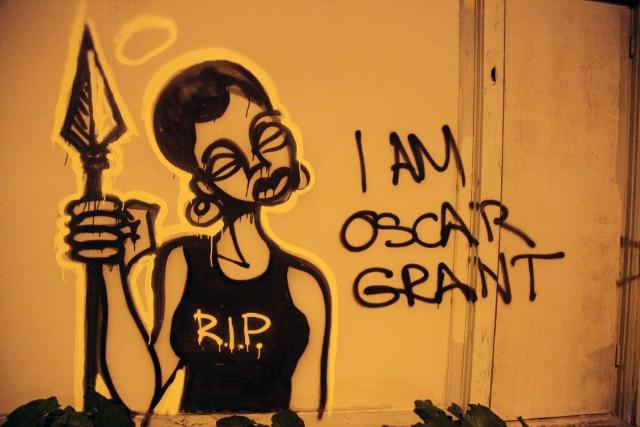 Editor's Note: Early morning on New Year’s Day 2009, 22-year-old Oscar Grant III was shot and killed in Oakland, California by a Bay Area Rapid Transit agency police officer. Grant was unarmed.  His face—pressed down against the cement. Onlookers video-phoned the horrific spectacle as his life was taken from him.

Over three dozen artists have contributed to the Oscar Grant Memorial Arts Project. Our goal was to gather the creative works dedicated to Oscar Grant from artists, musicians, writers, photographers and others. Any form of creative expression was accepted-- a video of a dance work, audio, song, poster, photo, etc. Selected portfolio work will be featured in several Bay Area publications (print and online). If you have any questions contact its curator, Christine Joy Ferrer at christinejoy@reimaginerpe.org. 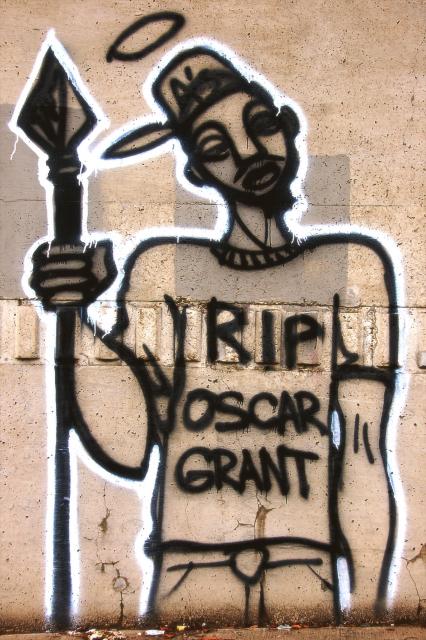 People are angry. Thousands have been appalled by the Oscar Grant shooting and have taken a new stand to fight injustice.  Many have chosen to  creatively express their stance through art. Songs have been written and dedicated to Oscar Grant. Poems, paintings and posters have been created. Graffiti artists have painted murals. Some of this is compelling art, some is ephemera.  Some of this art is controversial in its subject matter or its expression, but above all this art is the expression of a critical moment in the movement  to end police violence.

For this project, Media Alliance and Race, Poverty, & the Environment act as a clearinghouse, collecting and archiving copies of the material and coordinating its presentation by partner publications including: Race, Poverty & the Environment Journal, Media Alliance, http://media-alliance.org, and Street Spirit Newspaper. This work is supported by a grant from the Akonadi Foundation.

This project is co-sponsored by Media Alliance and Race, Poverty and the Environment.

Media Alliance’s mission is to defend, develop and strengthen independent media to support the creation of a truly democratic society and to build capacity of low income people and communities of color to create and be represented by media responsive to the communities needs. MA helps create alliances between media creators and media consumers to bring light to under-reported issues, build public support for fundamental rights to communicate and lift up best practices for the inspiration of a broad range of communities, regionally and nationally.

Since, 1990 Race, Poverty and the Environment (RP&E) has been exploring issues at the nexus of race, class and the environment. Founded as a joint project of the Urban Habitat Program of Earth Island Institute  and the California Rural Legal Assistance Foundation’s Center on Race, Poverty & the Environment.

The material presented on this portion of the site does not originate from RP&E and does not necessarily reflect the views of RP&E. In accordance with Fair Use guidelines, these images and text are reproduced for educational and research purposes only.

Related Stories:
Racial and Gender Justice
Tweet
‹ Racism and the Right to Due Process up Graffiti Memorializing Oscar Grant ›

END_OF_DOCUMENT_TOKEN_TO_BE_REPLACED
The Earth Is the Only One Telling the Truth