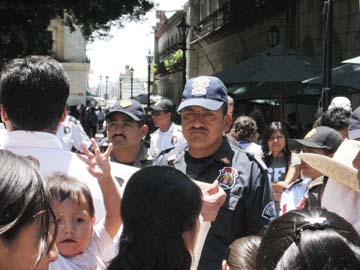 Few social movements in recent history more clearly crystallize the central role of education in building democratic participation than the struggle for better working conditions and people’s political power in the state of Oaxaca, Mexico in the past decade. Last year, as the teachers union carried out their annual strike for a cost of living adjustment, increased funding for school infrastructure, free school breakfasts, and free textbooks and uniforms for students, they were met by fierce police repression from the Oaxacan state government. A peaceful sit-in in the zocalo or town square suddenly turned into a pitched street battle when government forces tried to re-take the plaza by force. After the initial shock of this naked display of military power, which left dozens injured and several killed, the people of Oaxaca mobilized with a passion and cool coordination that stunned the government and resulted in an ongoing uprising for the next six months.

“Civic engagement came when people’s rights were violated, when their heads were smashed. People rushed in so quickly. The education came as they organized in self-defense. Within three days after the attacks, the people were in place. But, really, there were many preliminary preparations. They knew what they were reaching for and they had the whole assemblia culture of Oaxaca behind them.”

Teachers are intent on defending more than just their own paychecks, according to  Jill Freidberg, a film maker who has made a compelling documentary about the teachers’ organizing efforts, called Grains of Sand.

A central struggle has been educators’ attempts to fight privatization of the publicly run rural colleges that have offered their students—many from poor, indigenous communities—free tuition, free room and board, and guaranteed employment as schoolteachers upon graduation.

Looking for the motivation behind the repeated attempts to privatize education and to make teacher training less accessible to indegenous people, she says, “Part of the function of destabilizing the public sector is so that there is no time for anything but survival, much less struggle for cultural relevance or empowerment.”

The Popular Assembly of the Peoples of Oaxaca
In fact, central to the popular mobilization was a process of deep-rooted education organized by social movements that once waged their own distinct struggles for autonomy or better working conditions, and   are now working together to create a more democratic Mexico.

Jacob Muller, a journalist and activist with the Oaxaca Solidarity Network, says that many in Oaxaca city weren’t so sure that they supported the teachers when the strike began. But when the attacks on the teachers occurred, it brought the question into sharp relief: “Do we want to live in a police state where the government can viciously attack a group of workers demanding their rights?” The answer from the other workers in the city of Oaxaca was a resounding “No!”

Davies points out that the teachers’ support extends far beyond the urban core. “Ninety percent of Oaxacanos live in small communities outside of the central urban area. These teachers are in close relationship to their students and, of course, to the parents of their students. They are the ones buying school supplies with their own money, they are the ones teaching with no materials in inadequate buildings that were funded but never built.”

And beyond their role inside the classroom, many of the teachers are acutely aware of the larger social forces that impact their communities.

Genaro Vasquez, an educator in the Mixte area—an eight-hour bus trip from the city of Oaxaca—explains the core motivation behind his commitment to return to teach after receiving a university education in Mexico City.

“To awaken is fundamental because, in the majority of the towns and cities, ignorance is the normality of our time. It is a grave danger. Education rooted in our communities is the only solution to this profound threat.”

George Salzman, a retired professor who lives in Oaxaca and is a frequent commentator on Oaxaca in the alternative media, observes that “when the indigenous people come in from the countryside to support the teachers, they bring an agenda of their own. They want to gain control of their own lives. Getting rid of Governor Ulisses Ruiz is only a first step. The determination is to change the form of social life itself.”

Vasquez explains, “Standardized education is only about the numbers, it does not reach the intellectual or spiritual element. They are infatuated with computers but education is a problem of the human conscience. We must be teaching cooperation, solidarity, intellectual autonomy, and independence.”

Salzman attributes the wide-ranging challenge to the values still present in indigenous culture. “They want to move toward a world with no political parties, where decisions are made by consensus in assemblies, where each community has its own autonomy. It is a whole different concept of how to live and you can see it in the forms and structures that have been developing to coordinate the struggle.”
One of the organzations threatened with firbombing by government-backed para-militaries, was the base community group EDUCA. Their crime: educating the population to advocate for their rights. In the interview accompanying this story (pg.55),  Marcos Leyva, EDUCA’s director, explains just what this sort of organizing looks like. He also points out that the teachers themselves have a long way to go in implementing popular education within the school system.

“Despite the public school teachers’ participation in the rebellion, the schools themselves are not truly part of the process. The teachers cannot use the educational installations, materials, and facilities, because they “belong” to the official programs. They can’t do it inside the schools. If they do, they’re fired.  Teachers have to perform under official rules, so what they do is they teach outside their schedule and outside the formal system.”

Teachers have only just begun to challenge the paternalistic methods taught by the government schools, and the process of shifting the curriculum, using popular education in the government schools, and creating a truly liberating educational system is barely underway. “We’re confronting a 500-year history of colonial domination,” says Friedberg. The processes that can change such huge historical forces are, by their nature, slow and complex. But clearly, the rebellion in Oaxaca is one step in meeting such a challenge.

B. Jesse Clarke is edtor of Race Poverty and the Environment, Urban Habitat's journal of social and environmental justice.

Download or view a pdf of this article (253KB).

Tweet
‹ Kayse Jama: Center for Intercultural Organizing up Marcos Leyva: Building the Base ›