In November 4, 2008, voters in Alameda and Contra Costa counties approved Measure VV—a  parcel tax increase that would preserve low-cost AC Transit bus passes for youth, seniors, and the disabled—demonstrating clearly what a broad coalition of social justice groups could achieve by organizing for transportation justice. But despite the coalition’s victory at the ballot box, the fundamental structural inequality in transportation funding and investment in the Bay Area—such as, the prioritization of suburban expansion over preservation of the existing transit system and the bias in favor of capital projects over essential operating funds—remain firmly in place. 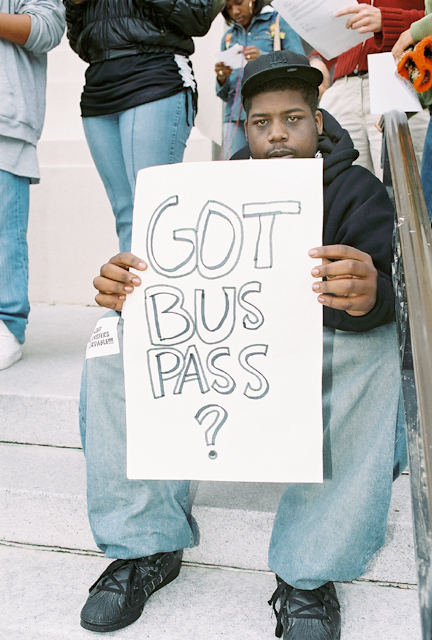 If we are to secure transportation as a right—of working class people to access jobs that are increasingly scattered across the region; of youth to get to school; of seniors and people with disabilities to live with dignity and access essential services—we need a fundamental shift in political power. Meaning, the Bay Area’s transportation justice movement needs to evolve beyond analyzing policy and organizing progressives against decision-making bodies like the Metropolitan Planning Commission (MTC), to building true grassroots power. Successful transportation justice movements, like the Los Angeles Bus Riders Union (LA BRU), have demonstrated that a multiracial, multilingual, working class base of bus riders is the most effective vehicle for organizing such efforts.

Transportation Inequality Creates Measure VV
In January 2008, AC Transit came out with a proposal to raise the cost of monthly passes from $15 to $28 (or 86 percent) for youth and from $20 to $28 (or 40 percent) for seniors and the disabled—to meet a budget shortfall.
The budget crisis was the result of both, short- and long-term factors. In the short term, the sudden and dramatic surges in fuel prices were a strain on AC Transit’s operating budget. But the more important factor was the systematic failure of MTC to provide the same per passenger subsidy for bus systems that it provides for rail systems (BART and CalTrain), thus creating a separate and unequal public transit system for people who most rely on public transportation.

Given that AC Transit carries the highest percentage of minority transit riders in the Bay Area, most of whom (57 percent) are estimated to make under $30,000 a year, the sharp increase in fares just as the global economic meltdown was becoming apparent would have stripped most youth, senior, and disabled riders of their right to affordable transportation. The campaign begun by transportation justice advocates Urban Habitat and the Transportation Justice Working Group—and widely supported by many community-based organizations—to reject AC Transit’s unjust fare increases ended up as the successful Yes on Measure VV campaign.

Transit Riders for Public Transit (TRPT) Campaign Demands
1. A reversal in the existing funding formula for transportation so that 80 percent goes to public transportation and 20 percent to highways, leading to a dramatic reduction in greenhouse gases and public health impacts.

2. The creation of auto free zones, auto free rush hours/days, and bus only lanes in metropolitan areas and the assurance of viable transportation for the disabled and for rural areas through federal and state funding.

3. Dedicate a minimum of 50 percent of the Federal Surface Transportation Act’s transit allocation to operating costs, with at least half of that restricted to bus operations to prevent massive fare increases and service cuts, while allowing for the expansion of service and fare reductions.

4. Prioritize capital preservation over expansion, with at least half of all capital funds restricted to bus fleets. Bus is the most cost-effective way to move people in larger urban and rural areas but has historically been short-changed on federal funds because of the powerful rail lobby.

6. Mandate a dramatic reduction in greenhouse gas emissions and air pollution for all federally funded projects and require each project to demonstrate at least a 25 percent reduction in such emissions prior to funding. Ensure that complaints to the FTA and EPA can result in projects being stopped immediately.

For More Information on TRPT, visit: www.urbanhabitat.org/tj/trptV for Victory At The Polls
In all, 16 organizations joined together to demand that AC Transit secure additional funding to prevent the fare increases. Some among the coalition had long histories of fighting for transportation justice while others saw transportation as a vital part of their members’ lives and a right.* In the end, AC Transit management agreed to place Measure VV on the ballot and delay any fare increases until the outcome of the vote in November 2008.

The Yes on Measure VV coalition was soon joined by Oakland Rising—a coalition of progressive base-building groups from Oakland made up of the Asian Pacific Environmental Network, Oakland ACORN, East Bay Alliance for a Sustainable Economy, Ella Baker Center, and Just Cause Oakland—in conducting a grassroots electoral campaign that also included efforts to defeat Propositions 6 and 9, both of which were designed to grow the prison-industrial complex. Among them, coalition members:

That the Measure passed with a 71.7 percent vote is a tribute to the coalition’s grassroots work.

Transit Justice Groundwork
For years, Urban Habitat and the Transportation Justice Working Group have worked to address the structural inequalities in regional transportation funding and its impact on low-income and transit-dependent communities and communities of color, through policy advocacy and analysis of funding decisions. Our work has focused on both, elected officials and the MTC, whose inaccessible and fundamentally undemocratic decision-making structure fails to accurately represent the region’s population. We believe that a more focused grassroots rights-based approach, which involves building the base, reframing the debate, and equalizing investments is required to achieve transportation equity and justice.

To achieve this goal, Urban Habitat has been partnering for several years with a collaborative that includes the public interest law firm Public Advocates and Building Opportunities for Self Sufficiency (BOSS) to develop and launch an East Bay Transit Riders Union. Recently, the collaborative identified Oakland ACORN as a partner to lead the grassroots organizing of East Bay bus riders, with help from the Labor/Community Strategy Center of Los Angeles—the group that founded LA BRU. They will develop an organizing model that fits the economic, political, and cultural conditions of the East Bay and the transit riders who live here.
In 2009, Urban Habitat joined civil rights and environmental justice groups across the country to support the launch of a national campaign to ensure that the Congressional re-authorization of the $500 billion Federal Surface Transportation Act (FSTA) funds prioritizes the needs of transit riders in low-income communities of color, which form the backbone of urban transit ridership. This effort, called Transit Riders for Public Transit (TRPT), is being organized and led by the Labor/ Community Strategy Center.

Towards New Transit Priorities
Since the 1950s, the FSTA has allocated 80 percent of its funding for highways and only 20 percent for public transit. To curb global warming and address the unmet transit needs of the urban poor, TRPT is boldly advocating for a dramatic reversal of this funding policy to allocate 80 percent of the money towards an expansion of public transit.

The re-authorization debate comes amidst a nationwide crisis in transit operations caused by municipalities cutting back transit services, despite record-setting ridership increases, be–cause of budgetary woes. In the Bay Area, Urban Habit and its allies have been challenging funding decisions by the MTC to ensure that existing transit services for low-income communities are maintained and improved.

Transportation apartheid will only end when transportation itself is recognized as a right that allows people access to other social goods—such as, education, economic opportunity, and housing—that are already viewed as part of a rights-based political analysis. It’s useful to remember that Rosa Parks helped catalyze the Civil Rights movement on a bus. The Bay Area needs a rider-led grassroots transit riders union to establish transportation as a right that cannot be ignored.

Bob Allen is the director of the transportation and housing program at Urban Habitat.