More than two million containers of cargo move through the Port of Oakland each year, making it the country’s fifth-busiest container seaport and a crucial link in the global supply chain. It connects the factories of China and the rest of the Pacific Rim with the United States consumer market, handling cargo for some of the wealthiest multinational corporations, such as Wal-Mart and Home Depot. The Port generates more than $7 billion a year in economic activity and tens of thousands of jobs in the San Francisco Bay Area. Yet, low-income residents of neighborhoods near the Port and the truck drivers who work at the Port miss out on their fair share of economic prosperity—and get more than their share of the health and environmental problems caused by diesel pollution from the trucks.

In 2006, the Oakland Coalition for Clean and Safe Ports (CCSP) was formed to bring an end to the broken Port trucking system, which contributes to a public health crisis in our community and keeps many truck drivers in poverty. Today this blue-green-brown alliance has grown to include more than 80 faith, environmental, health, environmental justice, labor, and community organizations fighting for cleaner air, sustainable jobs, and greater accountability from the Port of Oakland. The Oakland Campaign for Good Jobs and Clean Air is part of a national movement with campaigns underway in Los Angeles/Long Beach, Seattle, New York/New Jersey, and Miami. 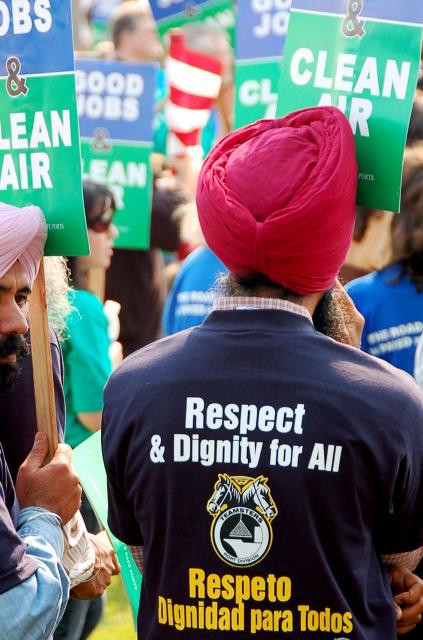 For decades, progressive social movements have demanded basic human rights. The environmental movement has advocated for clean air and water; the environmental justice movement has organized to minimize the disproportionate impacts of toxics in low-income, people of color communities; the labor movement has called for a voice on the job and a living wage; and community organizations have demanded local jobs and safe streets.  Along with other movements seeking self-determination, they have been building power against multinational corporations that drive the race to the bottom, destroying communities and the environment along the way. Too often, our movements have fallen for the false dichotomy that pits environmental protection against good jobs. But the campaigns for clean and safe ports link these issues tightly—clean air for communities near the ports depends on good jobs for Port truck drivers.

At one time, Port truck drivers did enjoy a middle-class standard of living. But deregulation of the trucking industry in 1980 brought poorer working conditions and a drastic drop in wages. Trucking companies vying for business from big box retailers and steamship lines undercut each other and paid drivers less. Many trucking companies shifted employees to “independent contractor” status, thus avoiding payroll taxes, Social Security, Medicare, and workers’ compensation. The companies have shed responsibility for their fleets as well.  Port drivers must purchase or lease their own trucks and pay for vehicle maintenance, fuel, registration, insurance, and other costs.  They earn as little as $8 per hour, so many can only afford old, polluting trucks that are poorly maintained and unsafe.

Approximately 1,500 to 2,000 truck drivers operate at the Port of Oakland today. Most of them are immigrants. They contract with more than 100 small trucking companies, who in turn contract with retailers and shipping lines.  Drivers work an average of 11 hours a day, and many work 14 hours or more.  Inefficiencies in the system make them spend an average of two-and-a-half hours waiting in line for each load they pick up.  As they are waiting in line their trucks are idling, exposing themselves and residents to diesel fumes that their trucks emit.  Trucks regularly drive through and park in West Oakland, increasing air and noise pollution.
“Currently, my family has at least 20 people who suffer from asthma,” said West Oakland resident Athena Applon. “Five of them use electric asthma machines and my mother uses an oxygen tank that stands at least two feet tall. Recently, I was diagnosed with asthma, too. I can’t help but wonder if there is a relationship between my family and friends having asthma and the black soot that comes from the trucks that travel in my neighborhood.”

Diesel truck pollution contains toxics that cause asthma and cancer. One in five West Oakland children suffers from asthma. Drivers report severe and persistent hearing loss, asthma, dizziness, headaches, and nausea.  Studies show that workers exposed to diesel fumes have up to 50 percent higher than average rates of lung cancer.

Diesel pollution from trucks working the Port of Oakland costs the community $153 million per year in health impacts linked to asthma, increased risk of cancer, other diseases, and premature death, according to the recent study, “Taking a Toll: The High Cost of Health, Environment and Worker Impacts of the Oakland Port Trucking System,” conducted by the East Bay Alliance for a Sustainable Economy (EBASE) and the Pacific Institute.” [1]

Communities near the Port include West Oakland, which is predominantly African American, and several Latino, Asian, and African American neighborhoods along the Interstate 880 corridor leading to the Port. All over the East Bay, working families are struggling in the current economic crisis.  Full-time workers line up at food banks, seek public assistance, and forgo healthcare.  The East Bay’s poorest families earned, on average, only 6.5¢ for every $1 earned by the highest income households in the area in 2007.  Under the current Port trucking system, wealthy global corporations pass the costs of doing business on to those who can least afford it: low-wage truck drivers and low-income communities of color.

“The situation is bad for everyone,” said Chuck Mack of International Brotherhood of Teamsters. “Corporate greed is hammering the community, the truck drivers, and all the workers at the Port. It has to stop.”

Holding the Port of Oakland Accountable
Over the past decade, EBASE has worked in labor-community coalitions to pass policy initiatives that have raised wages and secured health benefits for many Port workers.

Beginning in 1999, the Maritime and Aviation Project Labor Agreement (MAPLA) set up a collaborative process to work with the construction industry and enhance accountability to the local community. EBASE provided research, technical assistance, and facilitation to the coalition that helped create  MAPLA. The project significantly increased access to more than $1 billion worth of Port-related construction work for local residents. 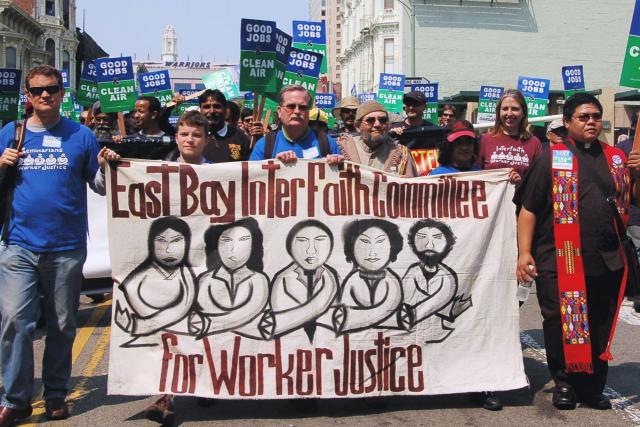 In 2002, 78 percent of Oakland voters approved Measure I, the Port of Oakland Living Wage and Labor Standards Charter Amendment, sending a clear message that the Port should lead the way in creating good jobs. The ordinance covers about 3,000 workers at airport and seaport businesses.  Another community-labor coalition worked with the Port of Oakland to incorporate Measure I’s employment standards into the Request For Proposals for Oakland Airport concessions, in an effort that directly parallels the CCSP campaign to set standards for the Port trucking industry.

Next Steps to Fixing the Port Trucking System
The Los Angeles Harbor Commission made history in March 2008 by voting unanimously for a comprehensive Clean Trucks Program that sets environmental, community, and labor standards.  The program, which went into effect in October, makes trucking companies responsible for a clean truck fleet by requiring them to hire drivers as employees, ending the “independent contractor” system. Port air pollution dropped quickly and dramatically. The Los Angeles program now serves as a model for sustainable operations in all West Coast ports.
In response to public pressure, the Port of Oakland is developing a Comprehensive Truck Management Plan.  CCSP will continue to advocate for reforms that make the industry responsible for cleaning up the truck fleet and improving working conditions for Port drivers. The Coalition is also pushing for a local hire program for residents in Port-impacted communities.

Despite these tough economic times, we have a unique opportunity to re-create the Oakland Port trucking system. All over the country, campaigns for clean and safe ports are showing the strength we gain when we join forces. We are seeing our once-separate fights for the rights to good jobs and clean air come together in a single struggle for environmental and economic justice.

Aditi Vaidya leads EBASE’s work to promote living wage and health for workers at the Port of Oakland and helps to organize the Coalition for Clean and Safe Ports, an alliance of over 80 environmental, labor, faith, public health, and community organizations promoting sustainable economic development at the Port of Oakland. For more information visit www.oakland.cleanandsafeports.org.