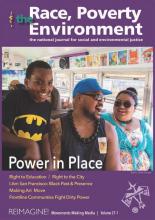 In this issue of RP&E, we explore how the places we call home are being transformed by development and globalization. Community organizing and the environmental justice movement have always been about place, starting in our own neighborhood and taking on the big issues where they impact our daily lives. Whether it’s housing affordability, access to quality education, cultural continuity or a healthy toxin-free environment, we are repeatedly called to take on a neoliberal economic model that unequally distributes costs and benefits via class, race and gender. Underlying today’s debates about gentrification and displacement are long histories of segregation; unequal incentives and subsidies by government agencies; and corporate profiteering based on cycles of investment and disinvestment in the cities, suburbs and countryside of the United States.

Place is more than just a location defined by geographical coordinates of longitude and latitude; it’s a social and material reality that interweaves relationship, culture, and ethnicity. In San Francisco the acute crisis of housing affordability has spawned yet another wave of displacement. The African American population of the city continues to move outward—part of the 21st century’s “great migration.”

In a special section, Correspondent Jarrel Phillips shares excerpts from I Am San Francisco; Black Past & Presence (I Am SF; pp. 48-64). This in-depth look at how African American residents understand the racial geography and history of San Francisco is an ongoing oral history and art project that so far includes more than 40 interviews with Black artists, activists and community leaders who live or work in San Francisco.

This first-hand, first-person reporting from the frontlines explores what Phillips describes as “the depth, beauty, complexity, and abundance prevalent within ‘Black life’ in San Francisco—culturally, communally and individually.” It reveals the deep and lasting contribution African Americans have made and are making to the cultural fabric of the city and indeed the nation. It affirms Black love as a counter-narrative to the mass media’s promotion of victimization and celebrates the reality of people’s daily thriving—even in the face of economic exclusion and police murder.

Cultivating cultural integrity is a core survival strategy for oppressed people in moments of migration and displacement and also for creating and sustaining community when we have settled into our new place. This issue includes two articles about writing workshops with women whose voices are often silenced—sexually exploited girls and immigrant domestic workers (pp. 71, 74). On these same lines, Web Editor and Designer Christine Joy Ferrer’s article The Moving Art House explores the role of art in creating community and connection among the diverse cultures of southeast San Francisco (p. 64).

Know Your Place
“Knowing one’s place,” as a euphemism for “accepting one’s rank in the social order,” was used to chastise African Americans and women who broke the limits defined for them. But in a more literal sense, it can also mean understanding the history and relationships that define where and who we are.

In one of the interview excerpts from I Am SF, history professor Aliyah Dunn-Salahuddin discusses how the shame and pain of living through racism was often hidden from their children by the 20th century in-migrants from the American South —and how telling those stories now can be an act of liberation.

The I Am SF art exhibition is being presented at City College of San Francisco (CCSF), one of the Bay Area’s great working class institutions, which has taught generations of residents and new immigrants since its founding in 1935. Contributing Editor Marcy Rein has put together a multi-part series delving into how the complex intersection of real estate interests and “school reform” has come close to destroying the college—and how the community is organizing to defeat the effort (p. 8-25).

“School reform” is another euphemism for something much uglier. Globalization has created a labor market split between a small number of highly skilled managerial and knowledge workers, and a large reserve of less skilled sales and service labor. Capitalist economics dictate reducing the supply of highly educated people to the number needed to run the system profitably.

At the community college level, this “reform” means downsizing: casting aside immigrants learning English and workers seeking retraining in order to focus on students bound for four-year schools or narrow vocational programs. The attempt to shrink City College coincides with the real estate boom, so the school faces pressure to surrender “surplus” property for still more high-end housing development, further driving up the cost of housing. Students are being pushed out of CCSF as their families are being displaced from the city.

Some families manage to retain stability by moving to the exurbs, but those at the bottom of the economic ladder can end up homeless. Working collaboratively with our sister publication Street Spirit, we have put together a cluster of articles in this issue that demonstrate just how grave the consequences of low-wage no-wage labor are for homeless residents of the area—and how those residents defend their rights with often-overlooked strategies for survival: street newspapers, intentional community and mutual aid (pp. 26-46).

And of course, the environmental justice movement has always been about protecting our homes from the impact of toxic waste and pollution. In the final section of this issue we take a look at how California communities are being impacted by fracking and fossil fuel development. Lucas Zucker, from Central Coast Alliance United for a Sustainable Economy, describes how Oxnard residents have been battling the siting of a power plant in their city (p. 78), and Contributing Editor Eric K, Arnold takes a closer look at how Governor Jerry Brown’s environmental policies are protecting California gas and oil investors (p. 84). Last but not least, an analysis of the dangers of the Paris climate agreement (by the “It Takes Roots” delegation to the UN climate talks) gives us an update on the status of perhaps our most important place—Mother Earth (p. 92).

Please support these crucial reports from the grassroots and help us to reimagine how we can make a media that supports and challenges our movements. You can join in our open meetings and community events by sending an email to rsvp@reimaginerpe.org. We can’t do this without you. Please have your organization subscribe or sponsor. n

Onward!
Jess Clarke is project director/editor of Reimagine! and a web producer at Street Spirit.