Black and Brown: The United Colors of Low-Wage Workers

Conventional wisdom holds that tensions between Black and Latino workers are on the rise as the two ethnic groups compete for the same low-wage service sector jobs in many of our nation’s big cities. But recent successful efforts by both groups of workers, to form unions and organize for pay increase and health insurance, show that workers and leaders from both communities are crossing racial lines to help improve the very jobs that they are supposed to be fighting over. 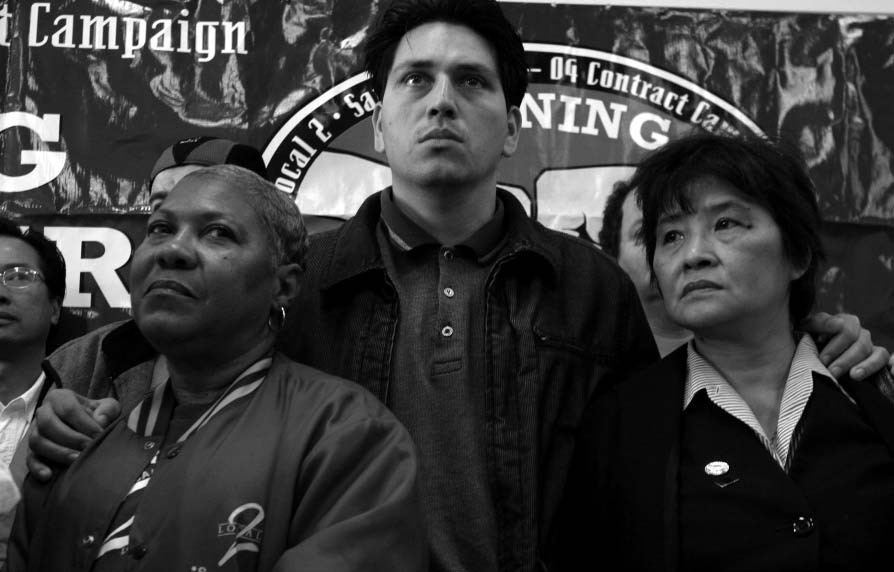 In high-profile strikes this year by Service Employees International Union (SEIU) janitors in Houston and Miami, Black and “brown” national leaders united to support a largely immigrant workforce. Dozens of African American leaders—many of them veterans of the civil rights movement of the 1960s and leaders in the ongoing struggle against racism and discrimination, such as Rev. James M. Lawson and Charles Steele, Jr.—lent their support to help mostly Latino workers win better jobs, using many of the same non-violent, civil disobedience tactics that helped spur the civil rights movement.

In cities like Los Angeles and Boston, labor leaders like Mike Garcia and Rocio Saenz are committing their union’s resources to the SEIU janitor strike to help improve the jobs of the (largely Black) security officers who work in their buildings—for many of the same employers and corporate real estate firms.

As a result of these efforts at “black-brown unity,” more than 20,000 security officers and janitors have secured the civil right to form a union, or have won a new union contract in the last few months alone.

The union victories so far show that the need for better jobs crosses racial lines. Also, workers are growing wise to the fact that the real culprits behind the bleak economic outlook are not other ethnic groups, but the large corporations that are driving our nation’s service economy.

A lot of attention is given to the fact that the service sector currently drives the overall American economy, but what is often ignored is the fact that the real estate sector drives the service economy. The entities that own, control, and invest in office buildings and shopping malls—companies like Goldman Sachs and JP Morgan Chase—either directly or indirectly control the jobs of more than nine million service workers (janitors, security officers, landscapers) at their commercial properties.

The real estate industry boasts of developing our cities and creating jobs for our communities. But in reality, the industry’s reliance on poverty-wages is actually undermining our inner cities and keeping African American and Latino workers stuck in dead-end jobs.

In Los Angeles County, thousands of commercial office buildings are protected by a private security workforce that is more than 65 percent African American and nearly 35 percent Latino. Most security officers live in South Los Angeles, where unemployment is three times higher than in other parts of the county, and 37 percent of the community lives in poverty.

As manufacturing jobs rapidly disappear from the area, private security offers one of the few employment opportunities to the men and women of South Los Angeles, where a fulltime worker typically earns at or slightly above minimum wage, and nearly half the adults and a third of the children do not have adequate access to affordable healthcare.

In the last 20 years, corporate landlords have drained more than two billion out of the South Los Angeles economy by stripping middle-class janitorial jobs from African American workers and replacing them with non-union, poverty-wage jobs. It has taken years of organizing to regain the unions in these jobs, and to win higher wages and health insurance.

Today, if the city’s corporate landlords would agree to pay security officers the same wages and benefits as the janitors who work in their commercial office buildings, it could bring an estimated $100 million more each year into South Los Angeles communities devastated by decades of discriminatory policies.

People of color and recent immigrants are demonstrating a new brand of black-brown unity, as they try to lift themselves and each other out of dead-end jobs and into a future with dignity, respect, and promise. These are the workers who are at the center of the efforts in our nation’s cities to transform the service sector from a one-way ticket to poverty, into a new pathway to the middle class. As these nascent coalitions gain strength, their next casualty may be the economic and political status quo that has been the greatest obstacle to prosperity for America’s inner cities for far too long.

Stephen Lerner works with the Service Employees International Union’s (SEIU) Justice for Janitors movement and is the director of SEIU’s Property Services Division. He first began organizing over 25 years ago with the United Farm Workers of America, on the grape and lettuce boycott.