Unlikely allies George W. Bush and Bill Clinton joined in offering eulogies honoring the Rev. Martin Luther King, Jr. at the November 2006 groundbreaking of the King memorial in Washington, D.C. Yet, even when federal officials attempt to honor this martyred revolutionary, they nearly always dishonor everything he lived and died for. The United States government continues to eliminate fundamental housing, welfare, and employment programs crucial to the well-being of the poorest Americans whom King championed.

King was slain at the very moment that he was organizing a massive army of poor people who would march on Congress and the White House and use militant nonviolence to force the federal government to enact an Economic Bill of Rights for the Disadvantaged.

King’s last and most daring dream was a Poor People’s Campaign to win full employment, affordable housing for all, a decent income for those unable to work, and equal educational opportunities for the poor. He foresaw a massive public works program to rebuild the dilapidated and substandard housing of the inner city by those who lived there, providing jobs, training, and housing in a coordinated effort.

In organizing this campaign, the Southern Christian Leadership Conference (SCLC) had designed a carefully detailed strategy for a prolonged effort that would train poor people in 10 different areas of the nation in the techniques of “militant nonviolence.” The intention was to create a nonviolent uprising, a multiracial coalition of poor people and their allies who would march to Washington, D.C., set up mass encampments, and then launch protests every day for economic justice.

To this day, the blueprints for this poor people’s insurrection remain the most visionary and brilliant strategy to overcome poverty ever put forth in our nation.

Origins of the Campaign

In 1965 and 1966, Rev. King brought the brilliant organizing insights of the SCLC to the slums of Chicago to confront the evils of racist landlords. King moved his own family into a rundown housing unit in Chicago’s notorious Lawndale slum (renamed Slumdale by its occupants), where they endured for a time the harrowing poverty, squalor, and overcrowding that other slum residents had endured for decades.

King and the SCLC organized huge marches for fair housing, and conducted systematic rent strikes where residents of many dilapidated buildings banded together, refused to pay rent to the slumlords, and instead, pooled the rent money to make building repairs themselves. With a daring audacity too little seen in today’s movements for economic justice, King crossed swords with capitalism’s central decree that property rights are sacrosanct.

Unlike today, when well-meaning housing advocates and liberal budget policy groups try to prevent further cuts to the already shredded safety net by politely lobbying and e-mailing Congressional representatives, King had the audacity to organize a multiracial coalition of poor people who would confront Congress and the White House in a daring showdown—a nonviolent insurrection in the nation’s Capitol. And that is what King was doing when his last day dawned—preparing to defy the whole might of an unjust United States empire that mercilessly oppressed its poor citizens, then and now.

After months of training in the discipline of nonviolence, the Poor People’s Campaign would march on Washington, D.C., erect shantytowns near the White House to make poverty visible, and then begin a campaign of massive sit-ins at federal agencies. King openly declared that his call for massive civil disobedience was aimed at disrupting, and ultimately paralyzing, the functions of the most powerful government on earth, unless and until it granted the Economic Bill of Rights.

King planned to erect shantytowns for tens of thousands of poor people, prefiguring the tent cities and squatter’s encampments set up by homeless activists today. The shantytowns would make the suffering of economic deprivation so visible that federal legislators—and the public—would be forced to see it all around them in Washington, D.C.

Then, once these encampments had forced all America to confront the national disgrace of joblessness and poverty, stage two would begin—a more militant phase of nonviolent resistance.

His words were visionary, uncompromising, and revolutionary: “The dispossessed of this nation—the poor, both white and Black—live in a cruelly unjust society. They must organize a revolution against that injustice, not against the lives of their fellow citizens, but against the structures through which the society is refusing to lift the load of poverty.”

If Congress and the White House still refused to take actions to lift the load of poverty, the Poor People’s Campaign would organize waves of protesters who would cause “major massive dislocations” at government buildings. Unemployed people would nonviolently blockade the Department of Labor. Those without health care would be organized to sit in at hospitals and refuse to leave until they received medical treatment. Massive demonstrations would be held at federal agencies, while across the nation, allies would mount economic boycotts and nonviolent shut-downs of factories which refused to hire the poor.

Federal officials and the FBI were frightened by King’s announced intentions to lead a campaign of civil disobedience on a scale that could disrupt the nation’s Capitol, and they denounced King with blistering venom. Negative leaks, disinformation, informants and provocateurs were just some the tools used by the government to derail the effort.

King had developed a strategy to confront the federal government with the same unwinnable dilemma earlier perfected by civil rights activists in Alabama, Georgia, and Mississippi: Either arrest innocent and poverty-stricken people by the thousands in the full glare of publicity in the nation’s Capitol and thereby create a national scandal, or capitulate to the just demands of those calling for an Economic Bill of Rights.

But it was not to be. King was murdered on April 4, 1968, just as the Poor People’s Campaign was getting off the ground. Long a prophet, King now became a martyr as well. Rather than the carefully planned civil disobedience that King was organizing, the United States went through riots and civil unrest in over 110 cities following King’s murder. 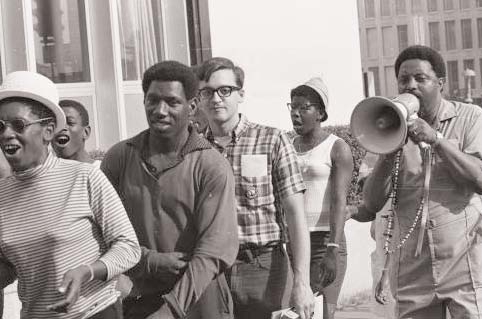 While the SCLC continued the campaign and got as far as building Resurrection City in Washington D.C., the riots, protests and violent repression that had followed Kings assassination had taken non-violent insurrection out of the realm of possibility.  While over 7000 people started the encampment in May 1968, and over 50,000 joined in protest marches, the encampment was torn down in late June by police order, the promise of mass civil disobedience unfulfilled.

King had predicted that the Poor People’s Campaign would be a turning point in American history, a chance for the nation to redeem itself from its legacy of poverty, racism, war, and exploitation. Instead, the dreamer fell and his dream of justice was assassinated.

Can the dream of a Poor People’s Campaign be resurrected? It won’t be revived by creating monuments of marble in Washington, D.C., as long overdue as that honor may be. But King’s dream does come back to life every time any one of us sets out and marches in Martin’s footsteps to confront and overcome the inhumanity of poverty, unemployment, and homelessness.

On October 17, 2006, Martin Luther King’s voice, his image, and his torch of resistance flared up anew in front of the Federal Building in Oakland, California, where about 400 demonstrators gathered to demand that the federal government make a renewed commitment to ending the scourge of poverty. Hundreds of Oakland schoolchildren, organized by St. Mary’s Center, marched with homeless seniors, religious activists, teachers, and housing advocates. The march was inspired by Martin Luther King’s commitment to end poverty; and, fittingly, the marchers were led every step of the way by a massive puppet of King, crafted by homeless seniors at St. Mary’s in loving tribute.

The procession culminated in a rally at the Federal Building, where Congresswoman Barbara Lee gave a stirring call to abolish poverty. She said: “It is appalling that in the wealthiest and most powerful country in the world, 37 million people are living in poverty. That is wrong! It’s immoral, it’s unethical. Look at our homeless veterans. Shame on America!”

The protest resurrected King’s commitment to economic rights and honored his Poor People’s Campaign as an unsurpassed blueprint for the edifice of human rights we are still waiting to construct, some 39 years after his death.

Although he had long since fallen to an assassin’s bullet, the Dreamer still had the last word at this rally for federal legislation to eradicate poverty. The demonstrators grew silent as a recording of King’s prophetic cry, “Let Freedom Ring!” rang out from loudspeakers outside the Federal Building in Oakland, and the giant likeness of Martin Luther King stood unvanquished, taller than ever. It felt like resurrection. At that moment, it felt like Martin’s last dream could never die.

Terry Messman is editor of Street Spirit, a newspaper of justice news and homeless blues sold by homeless street vendors in the San Francisco Bay Area and published by the American Friends Service Committee.

Download or view a PDF of this article (398 KB)