Behind the Kitchen Door: A Multi-Site Study of the Restaurant Industry 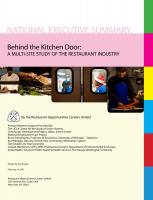 Three new reports on the wages and working conditions of restaurant workers in Los Angeles, Miami and Washington, DC, as well as a National Executive Summary, were released today, Monday, February 14, at city-wide summits organized by Restaurant Opportunities Centers (ROC) United. These reports represent the most comprehensive studies ever conducted on these local restaurant industries, and were carried out with primary research support from university professors in all three cities. Nationwide and in each of the eight regions studied – New York, Chicago, Metro Detroit, Los Angeles, Maine, Miami, New Orleans, and Washington, DC - the restaurant industry is vibrant, resilient, and growing. The industry includes approximately 10.3 million workers and 557,520 food service and drinking places nationwide that make significant contributions to the country’s tourism, hospitality and entertainment sectors and to its economy as a whole. In 2007, the restaurant industry garnered over $515 billion in sales revenue. Perhaps the industry’s most important contribution to the nation’s economy is the millions of job opportunities and career options it provides. Nationally, restaurant employment growth outpaced that of the economy overall, particularly in the last decade. The restaurant industry has proven very robust even during the recent economic recession. Nationally, restaurant employment lost jobs at approximately 40% the rate that the overall economy lost jobs. Moreover, while the job recovery has been slow for the overall economy in 2010, the restaurant industry has recovered at a faster pace. According to the Bureau of Labor Statistics (BLS) Current Employment Statistics, by the end of 2010 the restaurant industry had almost arrived at pre-recession employment numbers.