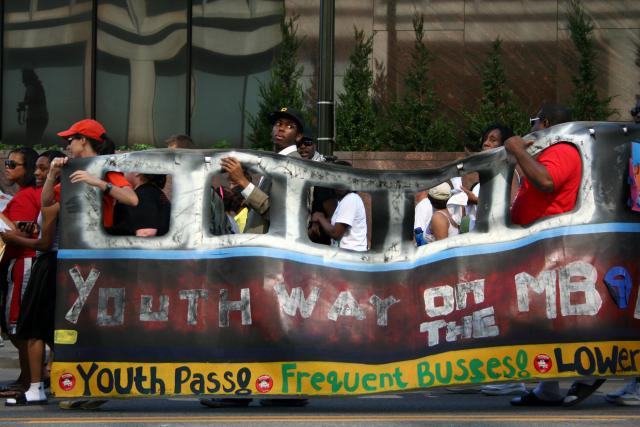 Following a decade-long campaign, Chicago’s Little Village Environmental Justice Organization (LVEJO) has won funding to rehabilitate a vital train line and run it on weekends again. But attempts to reverse cuts to bus services across the city’s south and west sides have failed, prompting activists to take their fight for increased funding to the national level.

“We saw that our local struggle to restore service to the Little Village community would not be successful if we did not push Congress to pitch in their fair share of funding and ensure that it is distributed equitably,” said Michael Pitula of LVEJO.

The feeling was pervasive enough to prompt the Labor/Community Strategy Center of Los Angeles to convene “Transit Riders for Public Transportation” (TRPT) in 2009. The national coalition of transportation justice groups aims to change federal funding priorities and regain the “private right of action” to enforce the Department of Transportation’s civil rights regulations.

Since the 1950s, every six years Congress has taken up a Federal Surface Transportation Authorization that heavily favors roads over public transit.
“We want to flip that,” says Francisca Porchas of the Strategy Center, which houses the Los Angeles Bus Riders Union (LA BRU). “We need to reduce greenhouse gases 80-90 percent in the next 30 years and we can’t have a bill that gives 80 percent of $500 billion to highways and freeways.”
Moreover, the 20 percent allocated to public transit is restricted to new capital projects rather than to maintenance, labor costs, and repairs. Now Congressman Russ Carnahan (D-MO) has authored a bill (H.R. 2746), which would allow a larger percentage of federal funds to be available for operating transit.

“Everybody’s talking about this bill as the next big shift in transportation policy [since] the Interstate Highway Act of the 50s,” said James Burke of WEACT in Harlem, New York. “Now we need Congress and the Obama administration to support the operations in our system and improve civil rights policies.”

TRPT is also advancing a bill that would restore “private right of action,” to enforce Department of Transportation regulation Title VI. The LA BRU exercised this right in its groundbreaking civil rights suit against the Los Angeles County Metropolitan Transportation Authority. But a 2001 Supreme Court decision (Alexander v. Sandoval) took away an individual’s right to take legal action when transportation policies have discriminatory impacts on the basis of race, color, or national origin. Since then, individuals have only been able to file administrative complaints with federal agencies or sue for intentional discrimination, which is much harder to prove than “discriminatory impact.”

The defeat of House Transportation and Infrastructure Committee chair Jim Oberstar (D-MN) in the midterm election bodes ill for TRPT’s efforts. And the new Republican Committee Chair, John Mica of Florida has already said that an increase in the federal gasoline tax, the primary revenue source for previous federal transportation bills, is “off the table.”

“Given that the last mid-term Republican wave resulted in Congress cutting funding for public transit, and the strong likelihood that Tea Party members will resist any civil rights legislation, our need for a national movement is greater than ever,” says Bob Allen of Urban Habitat. —MR and PL