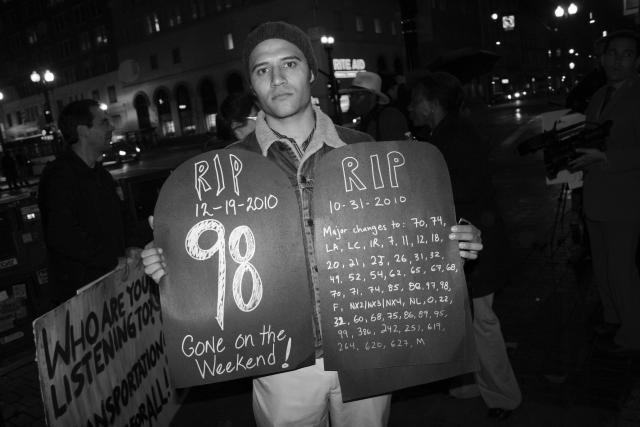 “They [the MTC and CTC] came up with $70 million for a little bitty trip to the airport—so they can come up with money for AC Transit!” yelled Karen Smulevitz of United Seniors of Oakland and Alameda County into her bullhorn over the street sounds of downtown Oakland. “Do you need that airport tram?” “No!” yelled the crowd. “Do you need the buses fixed and running?” “Yes!” they responded, louder still.

The rally on November 9 involved a growing coalition of East Bay organizations—Building Opportunities for Self Sufficiency (BOSS), Genesis, Public Advocates, Urban Habitat, and Alliance of Californians for Community Empowerment (ACCE)—working to meet the needs of folks who use public transit for basic survival. The newest member of this coalition is an emerging alliance of the East Bay’s bus riders organized by ACCE and assisted by groups already engaged in transportation work. Over the past seven months, ACCE has signed up 300 dues-paying members and gathered an additional 1,375 supporters. Bus riders have begun meeting regularly to develop a set of demands, which focus on protecting services and keeping fares affordable. 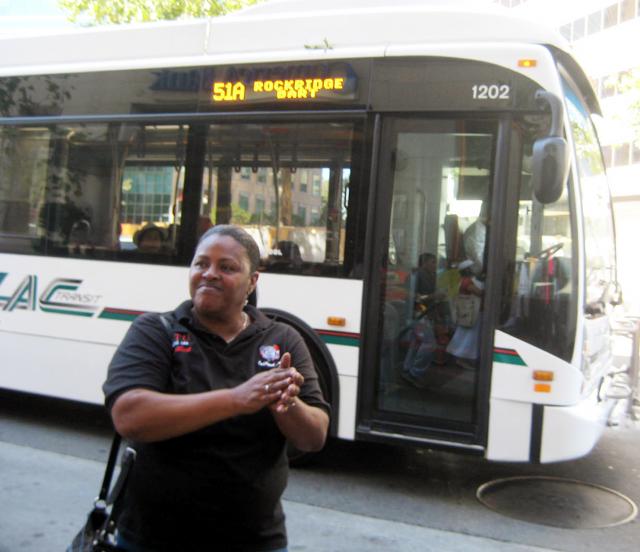 “None of us can afford to see services cut,” said Kit Vaq, who moved to the Bay Area from Fresno. “I don’t want to see Oakland turn into another Fresno—buses running once every hour or 30 minutes. That just won’t do.” But AC Transit—the Bay Area’s largest bus system with a ridership that is 80 percent low-income and 60 percent transit-dependent—has reduced its services by 30 percent over the last 30 years. And with a current deficit of $56 million, it has cut services an additional 15 percent in 2010. Simultaneously, Caltrain and BART, which primarily serve wealthier, whiter areas, have more than doubled their service, and billions have been spent on highways. In other words, those who can afford to drive have seen their access to essentials and opportunities expand, while AC Transit riders have lost access to critical destinations. Participants at the rally testified to the harm done by transit cuts by writing their problems on a large board: “Can’t get to school—#54 cut” or “Can’t see family—#NL cut.”

ACCE member Janet Mack recounted how she has to leave her Oakland home at 5:45 a.m. on weekends to get to her job in Alameda on time because AC Transit cut #62 on weekends and she has to walk to the #51 stop. “The other day it was raining when I went to work and my feet were wet all day... Some of these officials should ride the bus some time so they can see what it’s really like out there!” said Mack. The central demand of the rally was that local, regional, and federal elected officials take responsibility and stop the cuts to AC Transit. Richmond Mayor Gayle McLaughlin and Alameda County Supervisor Nate Miley attended the rally, while County Supervisor Keith Carson and California Assembly member Nancy Skinner sent representatives. All signed a pledge that they would do anything within their power to fight continuing service cuts and fare increases. The coalition plans to call other officials to account in the coming months. —MR