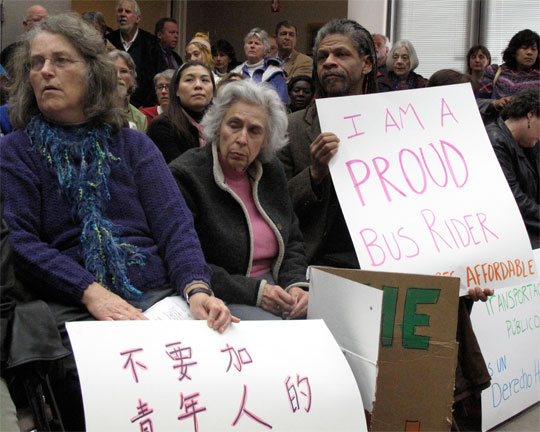 The Metropolitan Transportation Commission (MTC) is facing new scrutiny of its civil rights practices stemming from its role in the Oakland Airport Connector (OAC) project. As the federally mandated planning organization for the San Francisco Bay Area, the MTC approves all new transportation projects and allocates federal, state, and local funding for new and existing services. Hence, it is responsible for ensuring that the agencies and projects it funds comply with federal civil rights laws. Although the MTC denies any such responsibility, the Federal Transit Administration (FTA) disagrees and has launched an investigation following a complaint filed last June by Public Advocates on behalf of Urban Habitat and Genesis.

“FTA remains concerned that we found BART, a sub-recipient of MTC, out of compliance in 2009,” wrote FTA’s Civil Rights Director Cheryl Hershey to MTC Executive Director Steve Heminger last August. “The fact suggests to us that MTC has not adequately ensured BART’s Title VI compliance… and that raises the possibility that other sub-recipients of MTC may be out of compliance.”

In 2005, MTC faced civil rights challenges over its own direct funding decisions when Public Advocates filed a federal class action suit charging it with discrimination for consistently prioritizing projects that serve white, higher-income rail riders over AC Transit, which mostly serves low-income bus riders of color (Darensburg v. MTC). In 2009, a federal district judge ruled that MTC’s practices did have a discriminatory effect on minority bus riders but refused to overturn the funding decisions. The case is now before the Ninth Circuit Court of Appeals.

MTC’s skewed funding priorities reflect its undemocratic structure, says Bob Allen, who heads Urban Habitat’s transportation justice program. The 19-member commission is composed of county and city representatives, plus representatives from regional, state, and federal agencies. Each of the Bay Area’s nine counties gets one seat—including the smaller, suburban, and less diverse counties of Marin, Napa, Solano, and Sonoma. Alameda, Contra Costa, Santa Clara, San Mateo, and San Francisco each get one additional seat to represent all their major cities. So, in effect, Santa Clara County, which includes San Jose with a population of around 930,000, and Alameda County with an African-American population of around 194,000, each have just one representative more than Napa County with its total population of 135,000.

To make matters worse, commissioners tend to be local politicians who are more responsive to their electorate than to the interests of the greater region, says Allen. “If we’re serious about fighting sprawl and  for fairness in our transportation policy, the region has to spend more money on inner-core urban transit systems to make them run effectively. We’re really skeptical that it can happen with this power imbalance.” Strong FTA enforcement of Title VI complaints would help transportation justice advocates as they work for fairness at all levels of the planning process.

“The same principle that requires MTC to monitor and ensure Title VI compliance by transit operators also requires it to ensure compliance by county transportation agencies that play a major role in the planning process,” says Richard Marcantonio, managing attorney at Public Advocates. “Looking forward, the implications of the Title VI complaint could be big, not just here, but in other regions [where] metropolitan planning organizations are folding in the decisions of local agencies that have not been vetted for compliance.”—MR