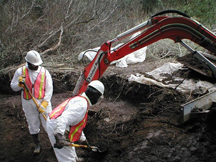 Well before socially responsible businesses became fashionable, Olin Webb and Allen Edson transformed their environmental contracting business, Remediation Services, Inc. (RSI), into a community-based enterprise, employing workers from the very communities they work in.  Their organization has a triple impact on local communities. They reduce toxic exposure by removing contamination. They strengthen the local economy by hiring and training community members for the work. They help create long term economic health by establishing new sites for economic development within formerly blighted communities.

Since 2002, RSI has been a specialist in environmental field services in the San Francisco Bay Area, with services ranging from soil and groundwater remediation, hazardous waste removal and transportation, and restoration of disposal sites.RSI evolved from the environmental advocacy work of Webb, who hails from Bay View Hunters Point, and Oakland-based Edson. Webb and Edson have been environmental justice advocates since the early 1990s, and have played a pioneering role in the redevelopment of brownfields, which are derelict sites contaminated by  toxic chemicals. These sites disproportionately impact working class, low-income, and people of color communities, who typically live close to such sites.

Webb and Edson realized that although brownfield restoration  projects enabled hazardous sites to be cleaned up and developed, millions of dollars were being paid to external remediation contractors who had no ties or responsibility to the community. They decided  that there was no reason for money to leave their already impoverished communities.  To accomplish this goal, their organization began to train and hire workers from the communities where the clean-up work was occurring.

As members of the National Black Environmental Justice Network and the Coalition of Black Trade Unionists (CBTU), Edson and Webb have always been passionate about rebuilding communities holistically. “Conventional redevelopment models reflect the inherent racism in the way projects are set up,” noted Webb. “So we wanted to make a positive, long term impact in the communities we worked in.” And that’s precisely what they have been doing, by training local community members to be skilled workers, including the 40-hour training to be able to work with hazardous material.

RSI has successfully reached out to undereducated, underutilized black youth—especially people who have been through the criminal justice system. RSI has also teamed up with Young Community Developers (YCD), a community-based job-training agency in Bay View Hunters Point, to regularly hire disadvantaged workers for community projects. RSI’s wages are on par with industry pay, averaging $25 per hour, in addition to vacation, and medical benefits.

One of its long term goals is to hire and sustain workers in San Francisco, Oakland, and Richmond—cities that are slated to experience rapid development in the coming years with major brownfields grants lined up.

RSI’s business model is best summed up by co-owner Edson: “We started out on a risky venture but it’s one that has paid off both to the business and to the communities.”   ?

For more information, visit www.remediationservicesinc.com.
Preeti Shekar is the program and development associate at Urban Habitat and a producer with KPFA radio’s Women’s Magazine.