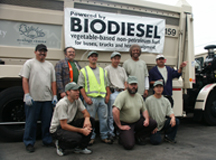 By Martin Bourque and Amy Kiser

What Does Zero Waste Mean?
If it can’t be reduced, reused, repaired, rebuilt, refurbished, refinished, resold, recycled, or com-posted, then it should be restricted, redesigned, or removed from production. The goal is to combine aggressive resource recovery and industrial redesign to eliminate the very concept of waste. Eventually, the community’s resource-use system will emulate natural cyclical processes, where no waste exists. While zero waste may seem like an ambitious aim, Berkeley’s history is full of people taking chances on new ideas. The idealism that thrives here has produced many tangible demonstration projects that have helped spawn programs in cities across the globe. For example, over thirty years ago, the Ecology Center pioneered curbside  residential recycling. Much has changed since those early days, when a single flatbed truck roamed the streets collecting bundled newspapers. Today, Berkeley’s recycling programs (residential, commercial, and drop-off) are a multimillion-dollar enterprise providing over 40 green collar jobs and saving nearly 20,000 tons of resource-rich material from the landfill. Curbside recycling has gone from a “crazy” vision to an environmentally sane, mainstream service offered across the country.

What Makes Berkeley Different?
Unlike many cities across the United States, Berkeley possesses its own recycling and solid waste facility, which is operated by the city and three local nonprofits—the Ecology Center, Community Conservation Centers, and Urban Ore. This unique situation offers many important benefits. Local control allows for higher environmental standards and greater efficiency, as well as familiarity with our own waste stream. Costs for these services are kept low, and good green collar jobs remain in the city rather than being sent elsewhere or automated out of existence. Other East Bay cities contract their solid waste programs out to corporate waste haulers, who transport their garbage and recyclables to large-scale regional facilities, where little is known about what actually happens to it. Because Berkeley’s solid waste program is in-house, we get to decide what happens with our materials.

As an example of local control, Berkeley voters mandated that collected recyclable materials be put to their “highest and best use.” This is why we sort glass into three color camps—green, brown, and clear—while many other recyclers have eliminated this step. The bottles we collect are melted down and turned into bottles again at a regional foundry. Some end up back in Berkeley at Pyramid Brewery, a local ale manufacturing company. The energy and resources that went into making the glass in the first place are conserved. When glass of different colors is mixed and melted, a murky color results that is unfit for new bottles. Mixed glass can be “down-cycled” into asphalt or fiberglass insulation, but it is often used instead of dirt as “alternative daily coverage,” with the sandy covering heaped over trash at the landfill every day, to keep flies and odors down. But when Berkeley’s residents place glass bottles in their recycling bins, they can be sure those bottles actually get recycled and don’t end up in the dump.

For-Profit vs. Non-Profit
In 2001, the Ecology Center transitioned its fleet of recycling trucks to run on biodiesel, an alternative fuel made from recycled restaurant grease. Later, Berkeley’s garbage trucks, school buses, heavy equipment, and fire trucks also made the switch to biodiesel. This significantly lowered asthma and cancer causing emissions released by our fleets as well as the city’s dependence on foreign oil. Had Berkeley’s recycling program been handled by corporate haulers, such a forward-thinking initiative would never have gotten off the ground. Unlike the Ecology Center, corporate waste haulers are rarely proactive on issues unrelated to their bottom line, such as air quality and vehicle emissions. Furthermore, for-profit solid waste companies, such as Waste Management, Inc., own landfills. They charge per ton for every scrap of waste that goes to the landfill; therefore they have a financial interest in communities continuing to generate large quantities of garbage. It is a core part of their business. They also offer recycling services because most cities demand it, but minimizing waste is not their mission.

Jobs and Revenue Stay in Berkeley
Because Berkeley’s solid waste operation is locally based, the jobs generated by the city’s waste stream remain local. The city has its own fleet and unionized crew, as does the Ecology Center and the Community Conservation Centers. A model “green-blue” partnership, recycling is an environmental endeavor that provides local, well-paying, green-collar jobs. Recycling helps support the local nonprofits, businesses, and community agencies that partner with the city to handle discards.  Even with all the extra steps required—sorting, baling, cleaning, and selling of those bottles, cans, and papers—recycling remains a cheaper alternative than paying landfill fees, thanks to the income generated by selling the materials. Recycling contradicts the myth that communities must choose between jobs and the environment. Recycling creates jobs while costing the residents less.
Between the Ecology Center and CCC, Berkeley’s institutional recycling programs constitute a multi-million dollar industry. This money stays here; it doesn’t leave in the form of shareholder profits or CEO bonuses.

Moving forward toward the zero-waste goal, even more jobs, more reusable materials and more revenue will strengthen the local economy.  ?