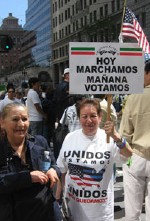 Last week, immigrant rights groups became the first major constituency to issue a release publicly denouncing the Obama Administration. Blasting the White House for “escalating deportations and detentions” while taking no action toward enacting comprehensive immigration reform, national immigrant rights leaders are escalating a pressure campaign that will feature the largest march of the Obama presidency in Washington DC on March 21. The march comes amidst growing frustration over the President’s failure to advance an issue that galvanized enough Latinos to the polls in 2006 to give Democrats control of the House, and which helped elect Obama president in November 2008.

Within days of the public criticism, the President met with activists to frankly discuss the political realities of moving forward. Having used massive marches in cities across the nation to put immigration reform in the national spotlight in 2006, activists are now returning to this tactic as part of new campaign to escalate pressure on Obama and Democratic Congressional leaders. The goal is to finally pass comprehensive reform this year.
“I cannot underscore strongly enough how pissed off the base is over the lack of action” -- Gabe Gonzalez, Center for Community Change
After activists came close to winning comprehensive immigration reform in 2006 and 2007, the election of and Democratic control of Congress seemingly made enactment a certainty in either 2009 or early 2010. Given the steep political cost of inaction — Senate Majority Leader Harry Reid and dozens of Democratic Congressmembers need large Latino turnouts to keep their seats — one would have thought that the Democratic Party would act quickly on this signature issue.

Congressman Luis Gutierrez certainly thought so. The strong immigrant rights advocate told the UNITE HERE convention in June 2009 that President Obama had assured him that if a comprehensive reform measure were not introduced in 2009, it would happen at the start of 2010.

But after Obama devoted but a single sentence to immigration reform in his State of the Union speech, and March 2010 began with no legislation even on the horizon, activists decided to take matters into their own hands.

The March for America

Organized by the Center for Community Change (CCC), the March 21 event will be the largest protest march since President took office. It will include activist groups from nearly every state, and revives the labor-religious-community coalition that built the mass marches of 2006.

According to lead CCC March organizer Gabe Gonzalez, SEIU, UNITE HERE, LIUNA and the UFCW have all committed to mobilize for the march. Gonzalez also told me “the churches are totally on board,” with evangelical churches — which have seen a steady rise in Latinos — playing a larger role than in 2006. Such faith-based activist networks as Gamaliel, PICO and the IAF are also involved, which means that a large cadre of very experienced organizers is involved in ensuring the event’s success.

Having written about how the immigrants rights movement was built, and then exploded onto the public stage in 2006, the reassembling of this movement in Washington DC next Sunday is significant. It means that many of the nation’s most strategic organizers from diverse fields — labor, immigrant rights, faith-based activism — are again working in concert to protect the over 10 million undocumented immigrants who face deportation and of their families due to the government’s failure to legalize their status.

And while the march sends a powerful message, Gonzalez and key organizers know that even more important is what happens afterward.

Following the march, activists plan to turn out in large numbers to the Town Hall meetings that congress members will hold during the two week recess starting March 29. The traditional media gave massive coverage to Tea Party members attending town halls last August, and should be under pressure to provide something close to that coverage for the immigrant rights activism at these upcoming events.

On April 10, there will be an immigrant rights rally in Las Vegas with Senator Reid. Reid knows his re-election depends on massive Latino turnout in November, and immigrant rights advocates are sending a message that they will mobilize for him provided he provides leadership on legalization.

Other rallies are also planned, but the chief focus will be on pressuring legislators to support legislation that activists now expect to be introduced in April. The key issue that divided progressives in the past — the treatment of guest worker programs — is likely to be resolved through various potential compromises, including the possible appointment of an independent commission to regulate such programs.

Because the groups aligned with the CCC-spawned “Fair Immigration Reform Movement” have weaker ties to the Democratic Party than do some of the key health care advocacy groups, the upcoming campaign will not hesitate to publicly criticize wavering Democrats. Gonzalez has already made it clear that “we expect the Democratic leadership to act as leaders and hold their Party’s votes,” and said New York Senator Chuck Schumer — who would be the lead Democratic Senator on the immigration bill — has “got the ball and he’s got to get off the dime.”

The Politics of Reform

Both President Obama and activists recognize that immigration legislation requires some Republican support in the Senate. This is not as impossible as it seems: recall that once co-sponsored a legalization bill, and Maine’s two Republican Senators, along with Lindsey Graham (SC), Judd Gregg (NH), Scott Brown (MA) and George Voinovich (OH) are potential yes votes.

Facing a primary challenge from a right-wing former Congressmember whose anti-immigrant attacks cost him his seat in 2006, McCain no longer supports legalization. But a grassroots pressure campaign that includes religious groups could potentially sway enough Republican Senators to avoid a filibuster, and Reid can use his clout to prevent any Democrat from joining a filibuster, even if they eventually vote against the bill.

So comprehensive immigration reform that offers a feasible path to legalization remains winnable this year. And for President Obama and other Democrats looking to fulfill their 2008 campaign promises to Latino voters, moving the legislation as far as it can go is essential.

This means requiring Republicans to actually take to the floor and spend day and night on the filibuster, clearly exposing GOP obstructionism — rather than the Democrats’ betrayal — as the cause of legislative inaction. Republicans have paid a steep political price for opposing legalization, and with key Senate contests upcoming in Colorado, Nevada, and Florida, and other states where Latino voters could prove the difference, Republican Senators may want to avoid a high-profile opposition strategy that galvanizes Latinos to come out and vote against them.

In a recent speech on health care reform, President Obama countered calls for delay by stating, “If not now, when?” The same argument applies to comprehensive immigration reform, which is why activists are mounting this unprecedented grassroots campaign to win legalization for millions of families this year.

Randy Shaw is the author of Beyond the Fields: Cesar Chavez, the UFW and the Struggle for Justice in the 21st Century.