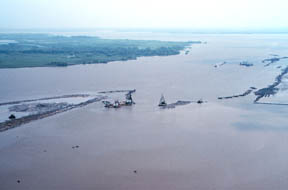 The two primary causes of Katrina’s devastation are: the subjugation and institutional oppression of African Americans, Native Americans, Chicanos, and other national minorities; and global warming. If these two dynamics are not addressed, inevitably, the social and ecological crisis revealed by Hurricane Katrina will only continue to deepen and spread. If anything, the structural neglect and disregard for the African American survivors has only intensified since September, 2005. The government has done virtually nothing to address the long term needs of the survivors, or provided any incentive for them to return and rebuild their homes and lives in New Orleans and the Gulf Coast.

Fundamentally, the Bush government and the private sector are treating the devastation of the Gulf Coast as if it were merely a development opportunity, and not as the profound social and ecological crisis that it is. If one takes into account the broad environmental and social implications of the devastation in the Gulf Coast, including the massive loss of its coastal wetlands, their salinization by the encroaching sea, and the wholesale toxicity of the region caused by decades of industrial pollution and environmental racism, it becomes clear that a profoundly different approach is needed than the one being promoted by Bush and the private sector. Acknowledging global warming and engaging international initiatives and embracing treaties like the Kyoto Protocol would be a start. However, in the absence of this engagement by the United States government, the people of New Orleans and the Gulf Coast must proceed to employ sustainable development principles and practices within a framework of survivor self-determination and racial justice to guide the reconstruction process.

The Framework
The principles and framework encouraged by the Peoples Hurricane Relief Fund and Oversight Coalition (PHRF/OC) are:


From Principles to Actions
In addition to political organizing, to demonstrate sustainable ways in which to address the root causes of the crisis, PHRF is launching a sustainable reconstruction project centered on New Orleans called Green Housing, Jobs, and Justice Campaign. The aims of this campaign are to:

The Program
Job Training and Unionization: We are seeking partnerships with unions and highly skilled tradespersons to ensure that African American residents receive some of the numerous reconstruction jobs currently available in New Orleans and the region. The long-term goals are to ensure that there are quality unionized jobs in the region and that the region is rebuilt according to green principles. By involving unions in training a pool of construction workers with the skills and political support for sustainable reconstruction, we will promote the implementation of both, social justice and sustainability.
Green Housing: The housing rehabilitation program  provides a living example of how a standard policy requiring that newly constructed housing be Green housing could benefit New Orleans and the Gulf Coast. The  demonstration project will rehabilitate two square blocks in a predominantly African American high impact neighborhood using locally grown, water proof, sustainable materials and techniques. An integrated solar powered grid will will interlink these homes and substantially reduce their carbon-based energy consumption.

The Community Workers Center: A quality grocery store, community market, cultural complex, and job-training center will meet diverse infrastructure and cultural needs voiced by survivors. Designed by survivors and built by members of our job-training program according to Green principles,  the Center will help strengthen the voice of people demanding a sustainable and equitable framework for the reconstruction.

Human rights activist and actor, Danny Glover  best described the reality of oppression of African American people in New Orleans and the Gulf Coast when he stated, “When the hurricane struck the Gulf and the floodwaters rose and tore through New Orleans, plunging its remaining population into a carnival of misery, it did not turn the region into a Third World country—as it has been disparagingly implied in the media—it revealed one. It revealed the disaster within the disaster: grueling poverty rose to the surface like a bruise to our skin.”

This fight and the various initiatives that compose it need broad political and financial support in order to be successful. We are making the widest appeal for help.

Some concrete things you can do are: join our coalition, endorse and participate in one or more of its campaigns and activities, and help build broad support for the goals of these campaign initiatives in your area and networks. At present we are seeking to raise $600,000 for the Green Housing, Jobs, and Justice Campaign. ?