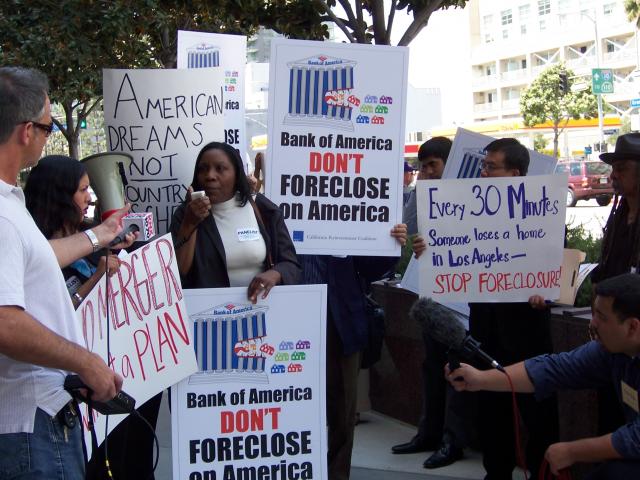 Home foreclosures can cost cities anywhere from $6,000 up to $30,000 for each abandoned property. The public pays these costs, either in higher taxes or in reduced city services. Ting wants to charge financial institutions a “foreclosure fee” and is pursuing a local measure to implement it. Such a fine could add pressure on lenders to modify loans instead of foreclosing, and raise much-needed funds for municipal budgets as well.

The foreclosure issue has motivated more housing and community economic development organizations as well as tenants’ rights groups to work together.

“Putting these two groups together is a powerful statement. In San Francisco those groups have been pitted against each other,” Ting adds. “It’s a powerful way to talk about how important it is for people to have a safe, affordable place to call home. This is not negotiable—it’s something we will fight for.” 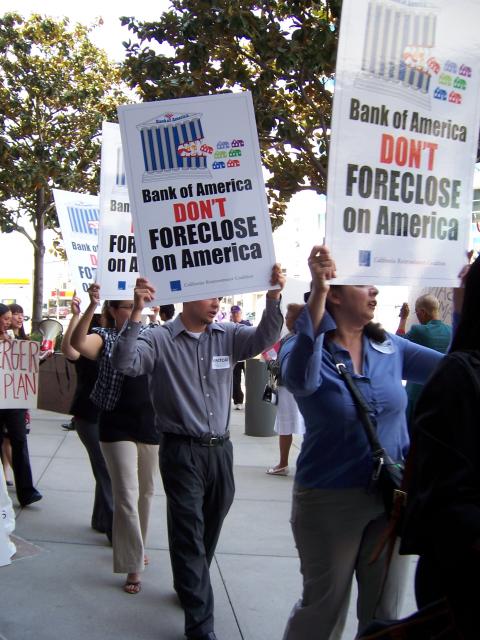 Assessors and other local officials in Contra Costa and Solano counties, as well as the cities of East Palo Alto and Vallejo, have begun exchanging ideas on  how local jurisdictions can do more on foreclosures. Advocates hope city policies can also drive a statewide discussion on more progressive legislation, while giving communities more organizing handles to create “no-foreclosure zones” in their neighborhoods.

Protecting Tenants and Neighborhoods
At least one-third of California’s residential properties in foreclosure are rental units, meaning that more than 225,000 renters were affected by foreclosure in 2008, according to a recent report by San Francisco-based Tenants Together.
“No longer can the mortgage meltdown be viewed solely as a homeowner problem,” says Dean Preston of Tenants Together.
Most renters living in foreclosed properties face evictions from banks, which say they want the properties vacated so they can prepare them for sale. But, many properties sit empty while some tenants have been forced into homelessness. Banks have also argued that they were not party to the rental agreement and therefore are not required to return security deposits. Tenants endure utility shut-offs and lack of notification that their rental homes have gone into foreclosure.

The California Reinvestment Coalition and its community allies began raising these issues at meetings with banks earlier this year. At the time, financial institutions claimed to have little to no awareness of the ways their foreclosures affected tenants. Representatives of several large banks expressed some willingness to address the needs of renters in their foreclosed properties—though they remain wary of “becoming property managers.” There are two pending California bills, sponsored by Association of Community Organizations for Reform Now (ACORN) and the Western Center on Law and Poverty respectively, to protect renters in foreclosed properties, as well as national legislation proposed by Rep. Keith Ellison of Minnesota.

Calling attention to renters in the foreclosure crisis has helped to broaden the discussion about the community-wide impacts of housing policies. Grassroots groups like Just Cause Oakland and ACORN have been working in the hard-hit East Bay to bring together local allies in defending homes against foreclosure and address the effects foreclosures have on neighborhoods.
“We started out tenant organizing, and then recognized that housing impacts working class folks of color whether they are homeowners or tenants,” says Kim Ota, a Just Cause organizer. “Over time we’ve expanded. Last year we reached out to public housing residents and now we are building toward how to make the neighborhoods stronger—including reaching out to churches and small businesses.”

Local Leaders Advocating National Solutions
Jaime Silahua, a resident of Antioch, California and a member of the Pacific Institute for Community Organizing (PICO) affiliate—Contra Costa Interfaith Supporting Communities (CCISCO)—helped lead an anti-foreclosure rally in Holy Rosary Church attended by 800 concerned residents in October 2008. A few months later, he was in landlord-tenant court, trying to stave off eviction after he lost his home to foreclosure due to a family medical emergency. He and other CCISCO leaders took that opportunity to argue that instead of going to landlord-tenant court to ask for more time before eviction, he should have the right to go before a bankruptcy judge to seek a modification of his home loan so that he and his family could remain in their home and in the community of which they have become such a big part.

Weeks later, Silahua and other CCISCO leaders boarded a bus to travel to eight cities for anti-foreclosure actions, before arriving in Washington, D.C. to lobby for bankruptcy reform legislation. [See “The Recovery Express” above.]

This spring, both the federal government and the state of California rolled out policies to help homeowners avoid foreclosure. The Obama Administration’s plan, announced in early March, aims to assist three to four million people by using $75 billion to subsidize loan servicers in modifying mortgages. Most advocates see the plan as a welcome first step despite its shortcomings. It still relies on voluntary incentives to prod servicers into making loan modifications, though they should have been doing so all along to prevent thousands of preventable foreclosures. The plan also fails to promote principal reductions. California leads the nation with 1.9 million borrowers whose mortgages exceed the value of their  property (more than 30 percent of all borrowers) according to First American CoreLogic.

California’s foreclosure prevention law went into effect in May 2009. While the law theoretically calls for a 90-day moratorium on foreclosures, CRC opposed the legislation because it lacks the means to monitor what loan servicers are actually doing.  Furthermore, it doesn’t require them to prove that they are actually modifying loans to be affordable and sustainable.
However, these policies should keep the spotlight on loan modifications for the next phase of the foreclosure crisis. Advocates will have to look at ways to implement modifications, monitor their success, and address the issues of fair lending and disparate servicing outcomes for people of color, immigrants, and low-income populations.
The California Reinvestment Coalition has continued to emphasize four main points about foreclosure prevention that are becoming even more critical now:

1. There must be an adequate moratorium of 90 to 180 days so the highly disorganized and overwhelmed servicing system can revamp itself under the federal and state guidelines. Without this, it is all too likely that many borrowers will fall through the cracks.
2. Loan principals must be reduced to make loan modifications meaningful. Modifications that only lower interest rates for a few years without writing down the principal will make it more likely that many borrowers will again default.
3. Bankruptcy reform must give judges the option of modifying home loans by “cramming down” or lowering the principal loan balance. This is a necessary “stick” to enhance the effectiveness of the government’s voluntary program. The threat of cramdown by bankruptcy judges is key to pushing servicers to make more modifications on their own.
4. Reporting requirements need to be in place to monitor whether loan modifications actually get made—by which companies and under what terms— and who is being helped according to their race and ethnicity, language spoken, and income. This data should be made publicly available so that borrowers, communities, and policymakers can see whether the plans are working, which companies are part of the solution, and whether all members of the community benefit equally.