Free Transportation to Get Our Education

By Julie Iny and Lila Hussain 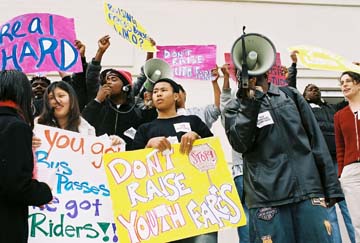 The bright yellow school buses that collect students through the leafy streets of most American suburbs don’t stop in Oakland. Instead, Oakland families have to shell out $180 a year per child to get their child to class on public buses. And that’s if they have the money up front to buy a $15 monthly bus pass for each child. Families paying cash will need over $400 per child, and that’s only for riding the bus on school days.

Students who cannot afford their own transportation lose out on educational opportunities.  And school districts’ budgets suffer when absenteeism reduces their state funding.

In many parts of the United States, a public education includes the cost of transportation to the school.  But for years, Bay Area school boards, transit officials, and elected representatives have ignored the absentee students created by the lack of affordable bus passes, and ignored the traffic congestion and air pollution caused by those families that do use cars for trips to and from school. At the same time, these officials have spent billions of dollars on freeways, commuter trains, and BART to the airport.

For over five years, students in Oakland have been leading an ongoing “Free Transportation to Get Our Education” Campaign to preserve discount youth passes. “We have a right to a free public education, but that right doesn’t mean much if your family can’t afford to get you there,” says Robert Ibarra, a student at McClymonds High School in West Oakland.

The Struggle Continues
In the past year, a new generation of organizers is taking up the campaign, partnering with adult allies from Urban Habitat and the Transportation Justice Working Group (a coalition of over ten community groups), to advance their campaign goals.

Among other things, the survey found that: 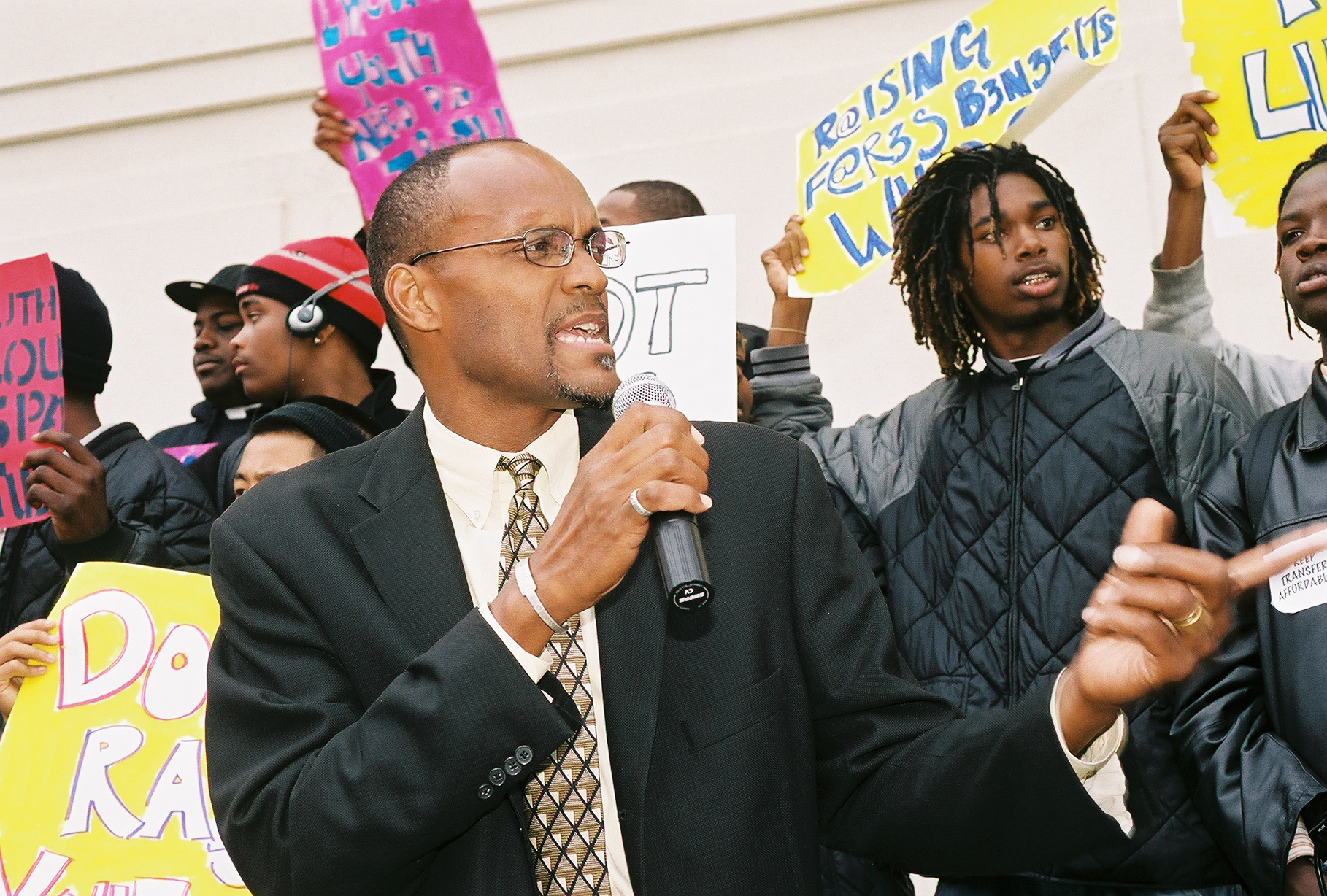 The survey was also critical in helping young people develop a sense of their own expertise as transit riders. Several youth spoke of being intimidated at the beginning of the year at AC Transit Board of Directors’ meetings—they didn’t understand the jargon and also felt marginalized or tokenized by some Directors. Because of the survey they developed and administered to over 1,400 youth, the youth organizers felt empowered and by the end of the year, confidently stood before the Board to share their findings and advocate persuasively for their recommendations.

This current group of leaders follows in the footsteps of  earlier successes in temporarily winning a free youth pass for low-income students in AC transit’s service area. Kids First youth organizer, Alisa Gilmore, a leader from the 2001 campaign says, “Affordable transportation is a basic necessity for everyone, including students.”

History of the Campaign
At the beginning of the 2001 campaign, a youth bus pass cost $27 a month.  In the face of rapidly escalating community pressure, the Metropolitan Transportation Commission relented. On December 19, 2001,  it announced a commitment of two million dollars towards the pilot program over the next two years; within weeks, funds from AC Transit and the counties raised the commitment to four million.

As a result, more than 33,000 low-income students in the two-county region were eligible for free bus passes. The $27 monthly pass was reduced to $15 for all other middle- and high-school students.

The program was tremendously successful—the passes were used by over 27,000 low-income students. Participation in after-school programs increased dramatically, pointing to the critical need for affordable transportation to ensure basic access for low-income youth to enrichment opportunities and after-school employment.

But its overwhelming success contained the seeds of defeat.  AC Transit claimed that the program was too expensive.  In September 2003, the board discontinued the free passes and retrenched to the $15 pass. Then in 2005, AC Transit tried to eliminate the $15 pass, despite a parcel tax that won voter approval in 2004 specifically including financial support for the Youth Pass.  AC Transit again attempted to renege on its commitment to voters to keep transit affordable for school kids.

Once again the students and adult allies had to fight for the right to get to school to be educated.

Coalition partners leveraged resources to support the campaign, co-facilitated a retreat with our youth that allowed time for more intensive leadership training and strategy development, and fostered a greater understanding of the connection between transportation justice and other issues of concern to young people. At the retreat, the youth analyzed the survey results, and through a training by the Youth Media Council, developed talking points and messages and got comfortable communicating those messages in front of the camera and with members and allies. The San Francisco Public Health Depart-ment helped the students analyze the survey results.

The youth organizers led the way in developing a press conference and rally in front of AC Transit’s public hearing on fare increases to present their survey results and get their campaign demands heard. They mobilized adult allies to speak to the board including: Reverend Andre Shumake of Richmond, Oakland Unified School District school board, member Greg Hodge,  a representative from Senator Don Perata’s office, Alameda County Supervisor Keith Carson, and Contra Costa County Supervisor John Gioia. The action was widely covered by local newspaper, television, and radio outlets.

Because of their advocacy and personal testimony about the devastating impact of the AC Transit’s proposal to eliminate monthly youth passes, they were able to sway the board to keep its promise to voters to protect the $15 youth pass. The youth also got a commitment from AC Transit Director Chris Peeples that he will hold the AC Transit Board accountable to commit to preserving the $15 youth pass until the parcel tax sunsets in 2015.

Next Steps
The Free Transportation to Get Our Education campaign will not stop until transportation costs are not a barrier to education and basic mobility for young people. Youth and adults will continue to work together to make sure that low-income youth are accounted for in the funding allocations by the Metropolitan Transportation Commission so that AC Transit has the subsidy it needs for lower fares.

July Iny is the associate director of Kids First Oakland. Lila Hussain is the transportation and housing associate at Urban Habitat.