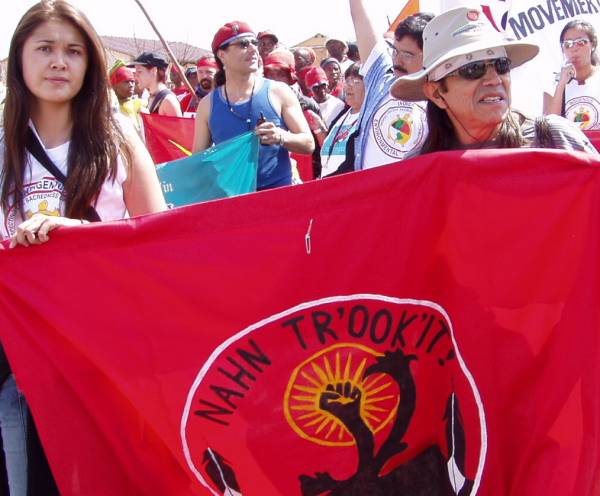 The link between unsustainable energy consumption in the Americas and the destruction and desecration of Indigenous homelands and culture is undeniable. As Indigenous peoples, we reject the proposition that our traditional lands should be sacrificed at the altar of irresponsible energy policies.

Indigenous peoples in the United States, Canada, and throughout the Americas have experienced systematic and repeated violations by oil, gas, mining, and energy industries of our treaty rights, particularly those that protect our traditional lands. Oil and gas developments have consistently violated our human rights and caused unconscionable damage to traditional territories that have sustained us since time immemorial.

In the United States, in contrast to other regions of the world, about 2/3 of all oil use is for transportation. (In most of the rest of the world, oil is more commonly used for space heating and power generation than for transportation.) Obviously, a transportation and energy policy that is so heavily dependent upon fossil fuel is unsustainable. Fossil fuels have a destructive life cycle, which encompasses extraction, transportation of these raw materials via pipeline, truck, and tanker to refineries, and the processing and shipment of the final product.

For the Indigenous peoples historically traumatized by colonial conquest and subsequent treaty violations, an energy policy dependent upon fossil fuels creates yet another cycle of destruction characterized by the devastation of sacred sites, the drying up of aquifers, micro-climate changes, and the poisoning of our air and soil with toxins.

With the birth of the environmental justice movement over twenty years ago, Indigenous grassroots activist groups, traditional societies, and organizations, such as the Indigenous Environmental Network (IEN), answered a call to action in support of indigenous communities disproportionately targeted for energy resource extraction and development. These groups have recently developed campaign strategies to help tribal community organizers working to either halt energy resource development on Native lands altogether, or force it to be more environmentally and culturally responsible. The strategies often involve providing long-term support to grassroots leaders as they pressure their tribal governments to make informed choices about the direction tribal economies ought to take, especially in regard to dependency on a fossil fuel energy paradigm.

Most consumers in the United States are unaware that the price they pay for gasoline does not reflect the cost of the devastation caused by the oil and gas extraction and refining process to the livelihoods and economies of Indigenous and other low-income communities. Most U.S. consumers simply take what they need to feed their addiction to energy and ignore the disproportionately large price that Indigenous and other low-income communities pay for a fossil fuel–based energy policy. Nor do they fully comprehend the true implications of this policy in terms of catastrophic global warming and severe climatic changes.

Natural Gas: Not an “Alternative” Fuel
Despite the failure of the Bush administration to endorse the Kyoto Protocol to reduce carbon dioxide releases, many cities are adopting their own standards for good climate stewardship, fuel efficiency initiatives, and energy conservation measures. Some cities with diesel-fueled transportation systems are seeking more environmentally friendly alternatives, such as compressed natural gas buses, or light rail and bus systems that run on electricity. This could do wonders for reducing carbon dioxide, other toxic emissions, and smog created by fossil fuel–dependent transit systems. These changes would be first steps towards addressing the environmental injustices experienced by low-income and urban Indigenous communities in our inner cities.

However, we often fail to take into account the fact that mass transit systems powered by electricity are connected to a grid that gets its power from the burning of fossil fuels. In short, America’s reliance on centralized power for heating, transportation, and water services only results in more pressure on Indigenous peoples and our lands.

Contrary to corporate claims and media spin, there is no such thing as clean coal or clean natural gas. And despite the new technologies around cleaner, coal-fired power plants and cleaner-burning natural gas options, the fossil fuel industry and its economic system is steering us towards catastrophic environmental destruction.

With 35 percent of the United States’ fossil fuel located either directly on or near Indigenous lands, we are the target of a renewed form of colonization characterized by largely unrestrained corporate exploitation of Native lands and peoples, resulting in ecological devastation and gross violations of human rights. An apt metaphor for the current situation is the period, about 300 years ago, when Jesuit Priests in black robes came into Indigenous communities promising a better quality of life through Christianity. At the time, church and state were virtually inseparable. Today, the same may be said of the relationship between states and corporations, with capitalism as the new religion. The Jesuit Priests have been replaced by corporate Chief Executive Officers in black suits who come into our homelands promising our communities and tribal leaders a better life through industrialization. What results is a change in our attitudes towards the sacredness of Mother Earth.

The chain of oil production, from exploration and transport to refining and distribution, is also a chain of destruction. First, forests are cut for seismic exploration, holes are drilled, and sludge pits filled. Next, the refining process releases deadly toxins into the air. Finally, vehicles contribute to smog and pollution. These environmental costs go largely unaccounted for, conveniently masking the actual costs people in the United States and around the world pay for profits amassed by a few. In recent years, Indigenous communities in North America have begun to document the environmental destruction caused by energy industries, in an attempt to expose the real price of oil.

The burning of oil, gas, and coal, known collectively as fossil fuels, is the primary source of humaninduced climate change. By burning these fuels, humans are releasing carbon that has been sequestered in the ground for hundreds of millions of years and are emitting carbon dioxide into the planet’s thin and chemically volatile atmosphere at an unprecedented rate. Climate change, if not halted, will result in increased frequency and severity of storms, floods, drought and water shortages, the spread of disease, increased hunger, displacement and mass migration of people, and social conflict. The homelands of the Indigenous peoples of the Arctic regions are literally melting away before their eyes.

The humans of Mother Earth have too much reliance on fossil fuels. To halt the damage resulting from their use, the industrialized countries must find more ecologically sound energy sources that don’t threaten the delicate balance that sustains all life. The people of the world need to re-evaluate their energy consumption patterns and embrace a transition away from dirty and destructive fossil fuels to clean, renewable energy. Sustainable energy has a minimal impact on the healthy functioning of the local and global ecosystems. It is energy with very few negative social, cultural, health, and environmental impacts, and which can be supplied continuously to future generations on Earth.

Clayton Thomas-Muller is a Cree Indian and a Native energy organizer for the Indigenous Environmental Network.

Download or view a pdf of this article (165KB).