It a training for activists from the American Federation of State, County, and Municipal Employees (AFSCME), a labor educator at a diversity workshop demonstrated the extreme wealth inequality in the United States with this tableau: 10 chairs were set up for 10 people; however, one person commandeered seven chairs, leaving three chairs to be shared by the other nine. Amusing though the sight was, it very vividly illustrated the point the educator wished to make: “We don’t have a diversity problem… we have an inequality problem!” 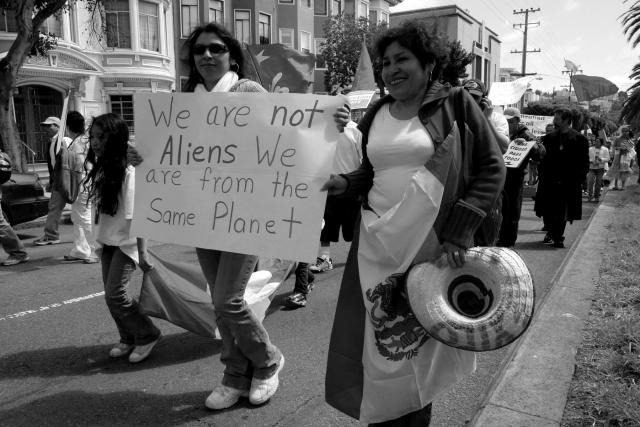 The discomfort experienced by the nine people sharing three chairs was recognized by participants as a common experience among people who feel the “economic squeeze” and deal with it by lashing out at folks perceived as “other.” So, we have situations, such as white vs. black; Christian vs. Muslim; men vs. women; straight vs. gay; native-born vs. immigrant; and documented vs. undocumented immigrant.

Many companies, unfortunately, are not above using these divisions to assert power over their employees. One union representative told the story of an immigrant worker who filed a grievance against his firm for violating the union contract. The violation was clear, but in this situation, the firm had helped the worker obtain his legal documentation and the supervisor was able to intimidate the worker into withdrawing his complaint with frequent allusions to this fact.

Similarly, political elites are taking advantage of the turmoil caused by a combination of changing demographics, growing inequality, and overall insecurity to split communities of color and low-income workers and solidify their power.

The Regions, They are a’Changing

Many older inner-city neighborhoods have been transformed into gentrified areas populated by the middle-class and rich of all ethnicities, or serve as gateway communities for newly arrived immigrants. Some inner-ring suburbs have taken the look of older industrial cities. Blacks of all economic strata have moved from central cities to suburban areas. Parts of the South and Midwest have become magnets for immigrants from Latin America.

The situation is rife with potential for discomfort and division among people of color and workers.

In response, the University of California, Berkeley, Labor Center has developed a six-hour training on immigration for the C.L. Dellums African American Union Leadership School. Its goal is to enhance participants’ knowledge of why immigrants are in this country and the conditions under which they live. The hope is that they will use this information to heal possible splits within their union membership.

The two most important features of this training are:

n It does not attempt to delve into the policy battles taking place in Washington D.C. These battles are complicated and one’s analysis of what is the best compromise is very much dependent upon one’s values and self interest.

n It starts from the perspective of the black community. Too often, attempts to engage native-born workers and communities on immigration issues begin from the perspective of new immigrants, leading to the unintended consequence of alienating native-born workers who feel that they are asked to empathize with others while little concern is shown for their own lives and struggles. 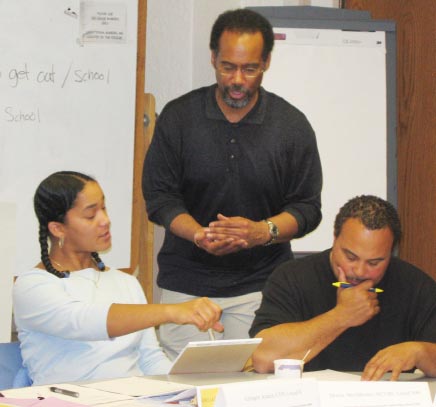 The training begins with the black experience and asks how participants (or their families) arrived in California, followed by a short video, Up South, on the black migration from Mississippi to Chicago. The idea is to place the black experience in the context of a migration experience—the push of racial and economic exploitation in the South, alongside the pull of new job opportunities and greater racial freedom in the North and West—to make it easier to understand the social, political, and economic forces that cause migration from the Global South to the United States. Participants are also asked to talk about the loss they have suffered in leaving home. Understanding the loss that comes with migration and relating it to loss suffered by immigrants allows participants to see the “others” as human beings and not just as people who “take jobs.”

The training then continues with a video (Uprooted) that highlights the experiences of three families that come to the United States from different parts of the Global South. The documentary looks at the lives of these individuals in their home countries and the economic forces that caused them to immigrate.

In conclusion, participants watch a PBS video on New Orleans immediately after Hurricane Katrina, which tells the story of a black union member who wishes to re-build his city. He finds a good paying job through his union but is soon replaced by immigrant workers receiving half the wage. The story then shifts to the plight of the immigrant workers and the exploitation they face at the hands of contractors. The documentary does a great job of highlighting how workers—native or immigrant—are used by corporations.

The training always generates intense discussions among participants, many of whom learn the real story behind immigration for the first time. As one participant remarked, “The comparison between black workers migrating north in the early 20th century and Latin Americans migrating north now was instructive. We can see ourselves in each other.”

Since completing the training, participants have tried to inject lessons learned into their daily dealings within the union.

According to one union member: “At first, I didn’t think the dynamics between trade unionists and immigrants (who were exploited and worked for lower wages) in Louisiana connected to my work [in the union]. But then I thought about a grievant I worked with who wanted [the union] to make a case out of her losing out on a job to a non-citizen. I think it would be useful for our union to help our members understand the stories and struggles of immigrants so that we can organize together and not be pitted against each other.”

This captures the challenge facing social and economic justice activists: how do we find ways to talk to others who see their economic plight as caused by the presence of immigrant workers?

I think the answer lies in engaging people on their own terms and helping them see that foreign workers are not enemies but allies in their struggle to live dignified lives and achieve their dreams.

Steven Pitts is a balor policy specialist at the University of California Berkley Center for Labor Research and Education, where he focuses on strategies for worker organizing and labor-community alliances.


To order the print edition of "Race and Regionalsm" use the back issues page. To download or view a pdf of this article use the link in the lower left below.

END_OF_DOCUMENT_TOKEN_TO_BE_REPLACED
History of Exploitation: from Slavery to Domestic Work