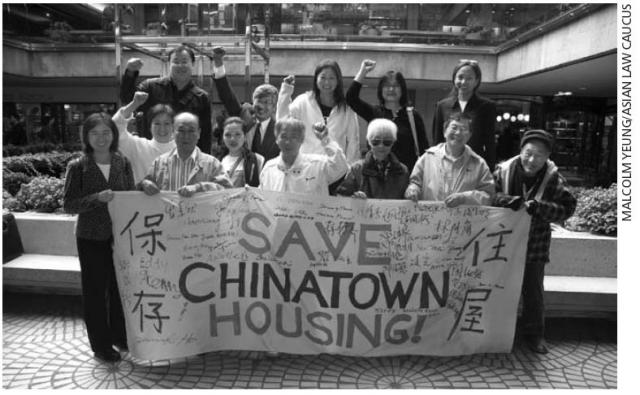 Situated at the juncture of San Francisco’s Chinatown and financial district, 53 Columbus is a “prime” piece of real estate by anybody’s estimate. But the tenants of this very desirable property—mostly low-income Chinese immigrants—probably wish it were not so. Their troubles began in 1998 when San Francisco City College—the owners of 53 Columbus—issued eviction notices with the intention of demolishing the building.

The tenants turned to the Asian Law Caucus for help and in 2001, this loose coalition of residents and community activists persuaded City College to sell their building to the newly formed San Francisco Community Land Trust (SFCLT), which in turn converted the building into a cooperative. Since then, with funding from the City of San Francisco and various grants, tenants have worked side by side with volunteers of the SFCLT to rehabilitate the building and upgrade the apartments, making them affordable, in perpetuity, for the tenants to own.

Historically, the population of San Francisco has always been diverse—ethnically and socio-economically. Today, rapid gentrification has made the city the second most expensive in the United States, forcing out people of color and working families. In the last 20 years, housing prices have increased more rapidly than working people’s incomes, and over one-fourth of the city’s renters pay over 35 percent of their income for housing. Whenever a tenant moves out of a rent-controlled apartment, the rent reverts to the market rate. In addition, evictions, condominium conversions, and the sale of multi-family properties, have all forced long term residents to leave the apartments that they have occupied for decades. Without affordable housing, San Francisco is in danger of becoming a homogeneous community with all of its diversity confined to history books.

“When you’re living in someone’s home, your life is dependent on other people. When you have your own home, you have autonomy.” Ji, a retired cook, told the San Francisco Chronicle in a July 25, 2006 story on how the Land Trust has benefitted the residents.

The SFCLT provides inexpensive, resident-controlled housing that working people can afford. Under the Community Land Trust (CLT) model, residents have the opportunity to cooperatively own their building. Residents purchase their units at a price based on their ability to pay but they have to sign a “limited-equity” agreement, which places restrictions on the re-sale of the units, and obliges them to sell their units only to other low-income earners—to ensure that all units within a CLT will be perpetually affordable. The lease agreements that govern a CLT are usually in effect for 99 years with the option of renewal for another 99 years. Residents can also deed their units to their heirs.

There are over 200 housing-oriented land trusts around the country, and from their 1970s beginnings based on counter-cultural ownership models, they have expanded to become a full-fledged housing strategy adopted by a wide array of people.
But true to its roots, the CLT model is more than just a mechanism for developing and financing affordable housing. Each apartment building that is rehabilitated and turned over to a CLT becomes a permanent barrier against gentrification. In other words, CLTs have the potential to revolutionize cities, making them places in which people of all races and income levels can live.

Rhea Serna is a member of the board of directors of the San Francisco Community Land Trust.