Selling Our City To Lennar Corporation

Over the last decade, Florida-based mega-developer Lennar Corp., has been snatching up the rights to the Bay Area’s former naval bases—those vast stretches of land that once housed the Pacific Fleet but are now home to rats, weeds, and sometimes, low-income renters.

Lennar acquired its first base in 1997, when it was named master developer for the decommissioned Mare Island Naval Shipyard in Vallejo. Two years later, it bid for the Hunters Point Shipyard but a consultant for the San Francisco Redevelopment Agency recommended giving the development rights to Ohio-based Forest City. Lennar fought back, using its deep pockets and calling on its politically connected friends. Soon, a parade of Lennar supporters—among them, Mayor Willie Brown and Representative Nancy Pelosi—convinced agency commissioners (all of them mayoral appointees) to ignore the consultant and go with Lennar because it was the only developer that had bothered to reach out to the Bayview Hunters Point community.

Who can say if Forest City would have done a better job? A developer is, after all, a developer. But Lennar’s victory at the shipyard helped it win the rights, four years later, to redevelop Treasure Island—even before it had broken ground at Hunters Point. And a couple of years later, it parlayed yet another exclusive development agreement; this time for Candlestick Point. 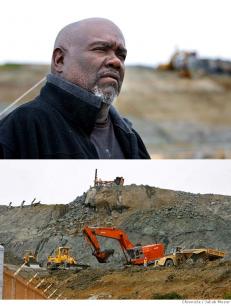 Now that the Fortune 500 company (with revenues of $16.3 billion in 2006) does have a track record at the shipyard, serious doubts have been raised about the wisdom of entrusting most of San Francisco’s undeveloped coastline to a profit-driven corporation that is proving difficult to regulate or hold accountable for its actions. Sure, Lennar has provided job training for southeast San Francisco residents, set up small-business assistance and community builder programs, and invested $75 million in the first phase of development. But it was also a Lennar subcontractor who failed to monitor and control the release of toxic asbestos dust next to a school at the Hunters Point Shipyard.

Also, when the building industry took a nosedive in 2006, Lennar reneged on its promise to provide much needed rental housing at Hunters Point Shipyard, saying that it was no longer economically feasible for the company to do so. The Redevelopment Agency had originally approved a plan for 700 of the 1600 units on the 500-acre site to be rentals.

In November, 2006, Eve Bach, an economist with Arc Ecology, warned the San Francisco Board of Supervisors that Lennar’s public benefits package for Treasure Island—comprised of 1,800 below-market affordable housing units, 300 acres of parks, open space, and recreational amenities, thousands of permanent and construction jobs, green building standards, and innovative transportation—could be seriously compromised. She cited the discrepancy between Lennar’s stated desire for a 25 percent return and Budget Analyst Harvey Rose’s projection of an 18.6 percent return as one basis for concern. “Particularly at risk [for] shortfalls are transit service levels, very-low-income housing, and open-space maintenance,” Bach warned.

Dysfunctional Development
“I can’t say that Lennar is trustworthy, not when they come up with a community benefits package that has no benefit for the community,” says activist Marie Harrison. “I’d like to be able to say that the bulk of our community are going to be homeowners. But I resent that Lennar is spoon-feeding that idea to folks in public housing who want a roof over their heads and don’t want to live with mold and mildew, but don’t have jobs or good credit or a down payment. I’ve heard seniors say, ‘I can’t even afford to die.’ Lennar is not being realistic, and that hurts my feelings and breaks my heart.”

The Redevelopment Agency’s apparent inability to pull the plug on Lennar or its subcontractors leaves observers wondering how best to characterize the relationship between the agency, the city, the community, and Lennar. The commissioners have been appointed either by Mayor Gavin Newsom or his predecessor, the consummate dealmaker Willie Brown. But the incestuous web of political connections goes even further.

Newsom is House Speaker Nancy Pelosi’s nephew by marriage. Another nephew—Laurence Pelosi—is Newsom’s campaign treasurer and former vice president of acquisitions for Lennar. He is currently with Morgan Stanley Real Estate, which holds Lennar stock. Both Newsom and Laurence Pelosi are connected to lobbyist Darius Anderson, who hosted a fundraiser to pay off Newsom’s campaign debts and counts Lennar among his clients.

It appears that the city’s interests would have been served better if the job of appointing and overseeing developers had been given to elected officials, such as the Board of Supervisors, rather than to mayoral appointees.

Plan B: Damage Control
At the moment, it appears that Lennar is accountable to none, except the hapless Redevelopment Agency. “Without any teeth, the Agency’s claims that they have enforcement capabilities are like arguments for the existence of God,” says Arc Ecology’s Saul Bloom. He recommends hiring an independent consultant to oversee the site, and firing contractors who mess up.
A Proposition 65 lawsuit filed “individually and on behalf of the general public,” by Christopher Muhammad’s Nation of Islam-affiliated nonprofit describes Lennar as “a rogue company that can’t be trusted.”

“Our contention is that Lennar purposefully turned the monitors off,” says Muhammad. “If you read the air district’s asbestos dust mitigation plan, it appears that there was a way to do this grading safely... The problem was that Lennar was looking at their bottomline and violated every agreement. They threw the precautionary principle to the wind, literally. And the city looked the other way.”

Raymond Tompkins, an associate researcher with San Francisco State University’s Chemistry Department and a member of the Remediation Advisory Board to the Navy, says: “If you can’t put water on dirt [to avoid] dust, you can’t deal with the far more complicated processes at the rest of the shipyard.” He would like an industrial hygienist to oversee the site.
“[Lennar’s] cavalier attitude around asbestos dust fosters concern among the African American community that gentrification is taking place and that they are going to be sacrificed for a stadium [next],” adds Tomkins, who has family in Bayview Hunters Point.
In fact, both Newsom and Brown, along with Senator Dianne Feinstein and Supervisor Sophie Maxwell, support a proposed ballot measure that would allow Lennar to build a new 49ers stadium at Hunters Point.

The Bayview “Jobs” Initiative
Who really is behind the Bayview Jobs, Parks, and Housing Initiative, which does not even have the support of the 49ers, who prefer to be in Santa Clara?

The measure was submitted by the African American Community Revitalization Consortium (AACRC), which describes itself as “a group of area churches, organizations, residents, and local merchants, working to improve Bayview Hunters Point.” Yet, this group is backed by Lennar and draws its members from among those with a personal financial stake in the company’s projects. AACRC founders Rev. Arelious Walker of the True Hope Church of God in Christ in Hunters Point and Rev. J. Edgar Boyd of the Bethel African Methodist Episcopal Church of San Francisco are both members of Tabernacle Affiliated Developers, one of four Bayview-Hunters Point community builders who entered into an agreement with Lennar to build 30 percent of the for-sale units in Parcel A. Tabernacle will build the affordable units while Lennar develops the market-rate homes.

Neither Walker nor Boyd disclosed this conflict of interest at a July 31, 2007 Board of Supervisors hearing where they, and the busloads of people Lennar helped ferry to City Hall, created the illusion that the community was keen on keeping the work going, instead of (temporarily) shutting down the site to address the health concerns of people in Bayview.

Assuming that community benefits, such as home-building contracts, better parks, and job training opportunities do trickle down to Bayview Hunters Point residents, will those opportunities outweigh the cost of doing business with a company that has endangered public health, created deep divisions within an already stressed community, and is struggling financially? (In late 2007, Standard and Poor placed Lennar’s debt rating at a junk bond BB-plus level because of the company’s “exposure to oversupplied housing markets in California and Florida.”) As for the 8,000 to 10,000 proposed new units at Candlestick Point—what percentage of those would be rented or sold at below-market rates? And what would be the effect of the nationwide mortgage meltdown on that?

According to Executive Director Fred Blackwell, the Redevelopment Agency’s deposition and development agreement (DDA) with Lennar does not allow the company to indefinitely mothball its housing units. “The DDA gives Lennar and the vertical developers the option to lease the for-sale units for one year, prior to their sale.” Blackwell also insists that they can hold Lennar accountable. “I feel like the DDA gives us all the tools we need,” he says. “But we can’t just arbitrarily shut things down.”
But many in the community are not convinced.

The Measure of Things to Come
Some believe that the only certain outcome of the ballot measure would be a mandate for the city to turn over its valuable public lands and spend millions of dollars in scarce affordable housing funds on subsidizing the ambitions of a corporation with a dubious track record and an active aversion to public accountability.

True, Lennar has promised to rebuild the Alice B. Griffith public housing project without displacing any residents. And the measure also allows for the creation of 350 acres of parks and open spaces, 700,000 square feet of retail stores, two million square feet of office space, and improved transit routes and shoreline trails. But what about the rest of the shipyard—contaminated with a long list of human-made toxins? With the possible early transfer of the shipyard from the Navy to Lennar via the city, can we have faith in Lennar’s ability to safely manage the project?

As it turns out, San Francisco voters will face competing ballot measures in the June 2008 election. A Lennar-supported measure turned in 14,000 signatures, while a competing measure calling for 50 percent of the newly developed housing to be sold or rented at below-market rates, has turned in 11,811 signatures. Shortly before press time, the Department of Elections determined both initiatives have enough valid signatures to go on the ballot.

Sarah Phelan is a reporter for the San Francisco Bay Guardian from which this story is excerpted.