Tax Credits for Developers, Bulldozers for the Poor 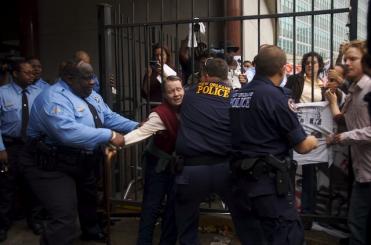 Despite Katrina causing the worst affordable housing crisis since the Civil War, the federal Housing and Urban Development Department (HUD) is spending $762 million in taxpayer funds to tear down over 4600 public housing apartments and replace them with 744 similarly subsidized units—an 82 percent reduction. HUD took over the local housing authority years ago and all decisions are made in Washington D.C. HUD plans to build an additional 1000 market rate and tax credit units, which will still result in a net loss of 2700 apartments to New Orleans. The new apartments will cost an average of over $400,000 each.

Affordable housing is at a critical point along the Gulf Coast. Over 50,000 families still living in tiny FEMA trailers are being systematically forced out. Over 90,000 homeowners in Louisiana are still waiting to receive federal recovery funds from the so-called “Road Home” reconstruction fund. In New Orleans, hundreds of the estimated 12,000 homeless have taken up residence in small tents across the street from City Hall and under the I-10.

In Mississippi, poor and working people are being displaced along the coast to allow casinos to expand and develop shipping and other commercial activities. Two dozen ministers criticized the exclusion of renters and low-income homeowners from post-Katrina assistance: “Sadly we must now bear witness to the reality that our recovery effort has failed to include a place at the table... for our poor and vulnerable.”

Resident resistance is being expanded by allies from a coalition of groups who see the destruction of public housing—without one-for-one replacement— harming all renters and low-income homeowners.

Kali Akuno, of the Coalition to Stop Demolition, explains why many people who do not live in public housing are joining residents in this fight. “In the past two years, New Orleans has faced a series of social crises that have struck a blow to our collective vision for a more just and equitable city, not simply one that is more inviting to elites. Yet none of these crises has been as uniquely urgent as this. What is at stake with the demolition of public housing in New Orleans is more than just the loss of housing units: it is the possibility of losing any significant affordable housing for the foreseeable future. Without access to affordable housing, thousands of working class New Orleanians will be denied their human right to return.”

A federal court has refused to stop the scheduled demolitions. Residents offered evidence to show that the three-story garden-style buildings were structurally sound and pointed out that the local housing authority itself documented that it would cost much less to repair and retain the apartments than to demolish and reconstruct a small fraction of them. The New York Times architecture critic described them as “low scale, narrow footprint and high quality construction.” HUD promised to subject plans for demolition to 100 days of scrutiny, yet it approved demolition with no public input in less than two days. The court acknowledged some questions about the fairness of the process but concluded that if the demolitions turn out to be illegal, residents can always recover money damages later.

But no one will say openly that African American renters are not welcome. Supporters of the destruction of thousands of apartments have come up with a series of stated reasons for their actions, but it clearly looks like political gain and economic enrichment are the real reasons.

Reduction of crime was supposed to be the main reason for getting rid of thousands of public housing apartments. Yet, crime in New Orleans has soared since Katrina, while the thousands of apartments remain shut.

Every one of the displaced families who were living in public housing is African American. Most are headed by mothers and grandmothers working low-wage jobs, or disabled, or retired. Thousands of children lived in the neighborhoods. Race, class, and gender are an unstated part of every justification for demolition, especially the call for “mixed-income housing.” If the demolitions are allowed to go forward, there will be mixed income housing—but the mix will not include over 80 percent of the people who lived there.

The absolute lack of any realistic affordable alternative is the main reason people want to return to their public housing neighborhoods, or be guaranteed one-for-one replacement of their homes. Absent that, redevelopment won’t help the residents or people in the community who need affordable housing.

HUD Corruption Reports
HUD Secretary Alphonso Jackson has his own reasons for pressing ahead with the demolitions. HUD has approved plans to turn over scores of acres of prime public land to private developers using 99 year leases and to give hundreds of millions of dollars in direct grants, tax credit subsidies, and long-term contracts. One of the developers described it as the biggest tax-credit giveaway in years.

Investigative reporter Edward T. Pound of the National Journal has uncovered many questionable and several potentially criminal actions by HUD in New Orleans. (See http://nationaljournal.com) Pound reported that HUD Secretary Jackson worked with, and is owed over $250,000 by an Atlanta-based company, Columbia Residential, which was part of a team awarded a $127 million contract by HUD to develop the St. Bernard housing development. Columbia was also awarded other earlier contracts for as yet undisclosed amounts under still undisclosed circumstances.

Pound also discovered that a golfing buddy of Secretary Jackson was given a no-bid $175 an hour “emergency” contract with HUD within months of Katrina. The buddy, William Hairston, was ultimately paid more than $485,000 for working at the Housing Authority of New Orleans over an 18- month period.

A review of the dozens of no-bid contracts approved by HUD in New Orleans shows millions going to politically connected consultants, law firms, architects, and insurance brokers. [In April 2008, Jackson resigned and is under investigation by the HUD inspector general, a federal grand jury, and the Justice Department's public integrity section.]

New Orleans and Beyond
What is happening in New Orleans is happening across the United States. It is just that New Orleans offers a more condensed and graphic illustration. The federal government is determined to get out of housing altogether and let the private market reign. A 2007 report of the Urban Institute confirms that in the last decade, over 78,000 low-income apartments have been demolished by HUD. Moreover, HUD has approved plans to demolish at least an additional 62,000 units. (See www.urban.org/UploadedPDF /411497_cost_benefits_hope_VI.pdf.) That is why locals are receiving support and solidarity from residents and housing advocates in Chicago, Miami, Los Angeles, Minneapolis, and New York.

Destruction of housing for the working poor is also a global scandal as corporations and governments push entire neighborhoods out. In India, traditional fishing villages destroyed by the tsunami are being forcibly moved away from the coast, and the land where they lived is being converted into luxury hotels and tourist destinations. The International Alliance of Inhabitants, which opposes the demolitions in New Orleans, points out poor people’s neighborhoods are also being taken away in Angola, Hungary, Kenya, Nigeria, Russia, Venezuela, and Zimbabwe.

Poor and working people in New Orleans and across the globe are living on property that has become valuable for corporations. Accommodating governments are pushing the poor away and turning public property to private. HUD is giving private developers hundreds of millions of public dollars, scores of acres of valuable land, and thousands of public apartments.
Whether resident resistance in the Gulf Coast is successful or not will determine not only the future of the working poor in New Orleans, but of working poor communities nationally and globally. If the United States government is allowed to demolish thousands of much-needed affordable apartments of Katrina victims, what chance do others have?

Bill Quigley is a human rights lawyer and law professor at Loyola University New Orleans. You can contact him at Quigley@loyno.edu. You can read updates on Quigley’s blog www.smirkingchimp.com/author/bill_quigley.