By Patricia George and Abel Russ

The Native Community Action Council (NCAC) is made up of 15 community representatives, both Western Shoshone and Southern Paiute, who are knowledgeable as activists, spiritual leaders, elders, Native leaders, and cultural historians, and who represent Native communities downwind from the Nevada Test Site. It is the objective and purpose of the NCAC to preserve traditional histories for our future generations and to protect our peoples’ rights and benefits, which should accrue to us pursuant to our tribal customs, by empowering our communities in understanding and managing the risks of radiation and other health-related concerns. As a special health and radiation project of the Ely Shoshone Tribe and the NCAC, the Nuclear Risk Management for Native Communities (NRMNC) project was created in 1994 to educate Western Shoshone and Southern Paiute communities on the health effects caused by radioactive contamination. 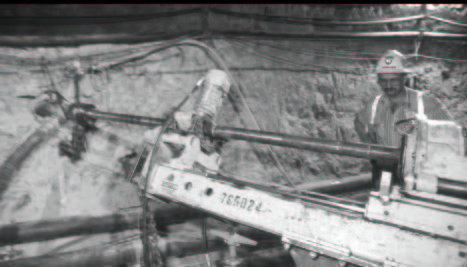 Since the beginning of the nuclear age very little has been done to protect the Western Shoshone and Southern Paiute’s health and environment from abuse. The U.S. government continues to pollute our Mother Earth with plutonium and other persistent radioactive isotopes in the research, production and maintenance of nuclear bombs. When the Department of Energy (DOE) calculated radiation exposures from the Nevada Test Site in the late 1980s, it neglected to consider unique Native lifestyles. Doses were calculated for nine different lifestyle models, yet none of them took into account the potential risks to Native people.

With this in mind Chief Raymond Yowell of the Western Shoshone National Council began looking for the truth about how radioactive fallout affected the health of our people and land. In 1993 the Childhood Cancer Research Institute, which has since grown into the Community-Based Hazard Management Program at Clark University (Worcester, MA), was contacted for assistance. That was the beginning phase of the NRMNC project, which has had ongoing support and funding from the National Institute of Environmental Health Sciences (NIEHS), the Agency for Toxic Substance and Disease Registry (ATSDR), and the Centers for Disease Control and Prevention (CDC), all in partnership and collaboration with the Ely Shoshone Tribe, technical researchers from Clark University, and community-based researchers from the Western Shoshone and Southern Paiute communities.

Through this special project the NCAC requires community control and empowerment for all funded health research activities due to the under-representation of Native Communities in previous studies on the effects of nuclear fallout. We have trained our Native people to strengthen our capacity for community-based environmental health activities. Community-based researchers have conducted, transcribed, and organized all of the interviews for the project and have been trained in Geographic Information Systems (GIS), a computer mapping technology. Community information has been compiled in a Community Exposure Profile, a “living document” written by and for the communities. Community staff have also created and distributed pamphlets and newsletters, and held workshops and presentations on our findings in over 15 communities, and at local, regional and national gatherings.

Community Knowledge and Research
The NRNMC’s local knowledge program has allowed us to gather extensive information from elders of the Western Shoshone and Southern Paiute communities about the lifestyle, culture and socio-demographic characteristics of our recent history. We have collected firsthand observations of the above-ground nuclear test era (1951-62), including observations of environmental abnormalities (such as sick and dying livestock and wildlife), observations of health problems, and descriptions of tests. Some elders remembered visible radiation exposure effects, such as reddening of the skin or hair loss, while living and working outdoors in the late 1950s and early 1960s. Many elders reported hearing and feeling abrupt vibrations “like a sonic boom” or seeing “beautifullycolored clouds” and “white dust clouds” traveling through the mountains and valleys from the test site after seeing flashes in the south.

We have also collected critical information about our housing, mobility, diet, and subsistence activities to give a more accurate description of potential radiation exposures. Our findings demonstrate additional and significant exposures that were experienced with Native lifestyles. The most alarming evidence generated so far is based on the fact that Western Shoshone and Southern Paiute families would often eat contaminated wildlife. One particular exposure pathway, the consumption of wild rabbits, was closely analyzed. It became apparent that the thyroid glands of rabbits accumulated radioactive iodine after nuclear weapons tests. Western Shoshone and Southern Paiute families almost always ate several rabbits each week, including the thyroids. Technical researchers at Clark University have used this knowledge to estimate significant doses of radioactive iodine, doses which were not counted by the DOE or the National Cancer Institute. Young children in Duckwater, Nevada, for example, are estimated to have received thyroid doses roughly a few 1,000 times greater than the average daily dose from natural sources of radiation from each of several test events depositing fallout on the community.

These doses are in addition to the doses from contaminated milk that both Native and non-Native residents received. Cows eating contaminated grass passed on the contamination in their milk; Native communities in the 1950s typically consumed fresh local milk and experienced higher exposures than people drinking store-bought milk. We concluded that residents of Duckwater, Shivwits, and other Western Shoshone and Southern Paiute communities received thyroid doses several-fold higher than non-Native residents in the area.

Studies of thyroid cancer in southwest Utah, around Chernobyl, and in children treated medically with radiation lead us to the further conclusion that Native community residents exposed to fallout as young children experienced roughly twice the thyroid cancer risk of non-Native people. While these results are based on the consumption of wild rabbits, other exposure pathways, including consumption of other small wild game that were routinely eaten at different times of the year, should also be kept in mind.

Above-ground nuclear weapons testing ended in 1962 and our communities have become less dependent on local game for food as local game has become more scarce. However, underground testing was carried out at the test site until 1992 and may resume; these tests have sometimes leaked radioactive fallout outside of the test site at lower levels. More importantly, traditional lifestyles have not been forgotten—although wildlife have suffered since the invasion of Euro-Americans, we hope that we will be able to reestablish our customary diet in a healthier future.

A Model for Managing Hazards
The NRMNC project has served as a national model for conducting health research and education in Native American communities for the purpose of environmental justice. Our work has demonstrated the need for us to take responsibility and control of our own community health issues. Our people must gain an understanding of these complex issues and determine our needs so that we can protect and preserve the health of our people.

The following are being considered for a community-based nuclear hazards management plan: environmental monitoring, a local knowledge program, legal recourse, medical surveillance, health and ecological research, implementation of a geographical information system, and a community education program. Health records, for example, have been poorly maintained over the years and we will have to take responsibility for linking exposures and health effects according to our experience. We are also currently expanding our focus; although the Yucca Mountain waste site has until recently been outside the scope of our project, we are now beginning to work on issues of nuclear waste transportation through our lands.

The Board of Directors of the NCAC maintains oversight of the NRMNC project and has helped to reinforce cultural history and to communicate to our communities that as Western Shoshone and Southern Paiute people, we have existed here for countless generations. This perspective must be maintained as we learn about the impacts of the Nevada Test Site.

Tweet
‹ Hogging the Land up Clearing the Air in Chinatown ›