Research and organizing put a halt to swine industry growth

In late 1991, Charles Tillery, Jr. of Tillery, North Carolina approached the community group, Concerned Citizens of Tillery’s (CCT), with news about a plan by the Halifax County Economic Development Corporation to bring industrial hog farming to Tillery. For Mr. Tillery, the only remaining descendent of the family that gave Tillery its name, the proposed development was cause for alarm. As he and CCT’s executive director Gary R. Grant began looking into the development, it became clear that it was not the type of hog farming to which farmers in the area were accustomed. Unlike the pasture or free-range farming that was typical in Tillery, industrial farming would concentrate thousands of animals in confined spaces and produce greater waste. 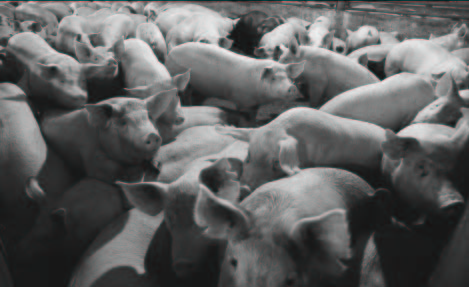 Charles Tillery was also disturbed that the first industrial hog operation in the area was to be located only a half mile from his antebellum plantation home, which was registered on the North Carolina and Federal Registries of Historic Sites. To Gary Grant, a community leader who had brought together the two local African-American communities to oppose school closings, advocate for access to medical care, and end racist agricultural policies, the proposed development was yet another affront to low-income people of color. Because the threat of this new form of industrial agriculture was being marketed to local farmers as economic development—with no mention of environmental damage—the two men agreed that an interracial coalition would be needed to initiate a massive organizing and education campaign. CCT took the lead in that process.

After several informal meetings, residents began the organizing process and scheduled a larger community meeting. Once the community learned about the scope of the development, there was no question that it was not the kind of “economic development” they wanted. To challenge the hog industry, the community first conducted house-to-house interviews to establish data on the structure, age and depth of private family wells serving the community. They feared that the hog factories’ proposed “lagoon” waste disposal system would pollute the groundwater and the aquifers that supplied those wells. There were also pollution threats to the Conoconnara Creek, which zigzags through the community, and the Roanoke River, which borders much of the land owned by Blacks in the community.

Research and Environmental Racism
An anti-industrial hog farm coalition developed quickly. Working with the Halifax County health director, county commissioners and local farmers, the coalition celebrated its first success with the passage of county’s Intensive Livestock Ordinance in 1992, which required that the lagoons be set back specific distances from property lines, streams and individual wells. However, the hog industry was still expanding rapidly, and CCT recognized the potential of bringing together community organizations with traditional environmental groups that were concerned primarily with the pollution of surface water and the damage to rivers, coastal waters and wildlife. These groups, including the Sierra Club, Wildlife Federation, Waterkeeper Alliance and Environmental Defense, had the resources, expertise and political access not available to community groups—especially African-American organizations. CCT hoped these large organizations would help poor rural communities oppose the hog industry’s destructive impacts on the environment, health, independent farming, Black land ownership, local autonomy, and indeed, democracy itself in eastern North Carolina.

CCT convened the Hog Roundtable—the name given to the coalition of groups—in early 1993. Its purpose was to provide education on hog farms to unsuspecting communities, coordinate legislative rally days, and organize for a statewide effort to stop the rapid and massive growth of the hog industry. As members of the Hog Roundtable and other citizens attempted to convince local and state officials that the hog industry was harming the people and environment of eastern North Carolina, officials asked, “Where is the documentation?” Most scientific studies of impacts of industrial swine production had been conducted in Iowa and in parts of Europe, areas where industrial production methods had a longer history. CCT needed to begin data gathering for North Carolina in order to impact policy. To that end, Mary Lee Kerr, representing the Institute of Southern Studies at the Hog Roundtable, introduced Grant and CCT to Steve Wing, an epidemiologist in the School of Public Health at UNC-Chapel Hill.

CCT worked with Wing to initiate research into the location and health impacts of industrial hog production. This research was driven by concerns of rural people living closest to the confined animal feeding operations (CAFOs), where thousands of hogs are crowded into metal buildings and the waste is flushed through slats and into cesspools before being sprayed on fields. The waste is rich in nitrogen, phosphorus and pathogens, and contains residues of antibiotics and hormones used in the feed to promote growth. Bacteria resistant to antibiotics used in hog feed, some of which are also used in human medicine, have been identified in waste pits as well as in nearby ground and surface water. Additionally, neighbors of hog CAFOs were devastated by horrible odors that permeated even their clothes and furniture.

CCT and other community-based African-American organizations in eastern North Carolina observed that many hog CAFOs were located near Black schools, churches and neighborhoods. With the history of Warren County—the majority African-American community that gave birth to the environmental justice movement when it opposed a massive PCB landfill in the late 1970s—in mind, community groups charged the hog industry with environmental racism. However, their charges were ignored or rejected by white politicians, journalists and environmentalists on the grounds that community groups’ observations were anecdotal.

Consequently, CCT partnered with researchers from UNC to conduct more formal research. This community-academic partnership decided to link permit records and federal census data to document the racial and economic characteristics of neighborhoods with and without hog CAFOs. Findings were clear: hog CAFOs were almost 10 times more common in low-income and Black areas compared to higher income areas with few Blacks, even considering statistical adjustment for rural location. Racial and economic disparities were greater for the corporateowned and operated CAFOs than for the dwindling number of independent operations. Furthermore, the research showed that hog CAFOs were predominantly located in areas where residents depend on groundwater for drinking.

Next, the research team conducted a rural health survey to address concerns of local residents who reported respiratory, gastrointestinal and other symptoms associated with foul odors from hog CAFOs. Community consultants introduced trained interviewers to residents in three neighborhoods, one with a hog CAFO, one with a dairy, and one with no industrial livestock. Participants were asked about a range of symptoms they had experienced in the last six months, as well as about their quality of life. Results showed that residents within two miles of the hog operation reported more headaches, mucous membrane irritation, coughing and nausea than residents in the other two communities. Reports of other miscellaneous health problems, such as backache and hearing loss, were similar in the three areas, suggesting that hog CAFO neighbors were not over-reporting symptoms.

Hope for Sustainable Hog Farming
The studies conducted by CCT and UNC-Chapel Hill focused on concerns of people whose homes, quality of life, health, jobs, property values and communities are most directly impacted by industrial hog production. But local issues were of less interest to members of the Hog Roundtable who lived in urban areas and were more concerned with the industry’s impacts on recreation, wildlife and water quality in areas far downstream from hog CAFOs communities. The Roundtable’s ability to act as an effective agent of change was diminished by differences in perspective between rural community members and mainstream environmental groups and lobbyists who were more willing to make compromises with politicians affiliated with the hog industry. Furthermore, white groups were uncomfortable addressing the issues of environmental racism and worker rights raised by African-American members of the Roundtable. Black members argued that environmental and occupational impacts of industrial hog production were examples of race and class exploitation that undermine the well being of Southern rural workers and people of color at the expense of wealthy whites in the South and other regions.

The efforts of CCT and the Hog Roundtable were part of a wave of public opposition to the hog industry in North Carolina that led to a statewide moratorium on hog factory construction in 1997, which is still in force. However, after some member organizations participated in an agreement between Smithfield Foods, the world’s largest hog producer, and the state attorney general to conduct research into alternative waste management technology, the Hog Roundtable ceased to meet regularly. Many community organizations considered the agreement to be a sellout since the agreement did not promise to make any changes unless the industry found them to be “economically feasible.”

The Hog Roundtable contributed to the broader movement to address impacts of industrial hog production in North Carolina, including efforts to stop new slaughterhouses; impose a moratorium on construction and expansion of hog CAFOs; and create opportunities for sustainable hog farming. Despite its ultimate demise, the Roundtable was a promising effort to unite environmental, civil rights, and economic justice organizations across race, class and regional divisions. It provided a powerful model and hope for a movement toward a more just and sustainable future.

Gary R Grant is executive director of Concerned Citizens of Tillery, a community-based organization whose purpose is to promote cultural awareness and improve the social, economic and educational welfare of the citizens in the community through self-development.

Steve Wing is on the faculty at the University of North Carolina School of Public Health. He focuses on environmental and occupational epidemiology.