Diesel exhaust—the black smoke emitted by buses, trucks, trains and ships—is the number one toxic air pollutant in California. Chemicals in diesel pollution can cause cancer, harm the reproductive system, and aggravate or cause asthma. New research shows that West Oakland, California, a neighborhood surrounded by freeways and bordered by the Port of Oakland, suffers from far more than its fair share of this toxic pollution. But residents, community organizations and the city have uncovered a host of practical solutions that can help clean up West Oakland’s pollution and improve the health of residents as well as the local economy.

West Oakland is a small neighborhood of 24,000 residents on the shores of the San Francisco Bay. More than 60 percent of the residents are African American and 89 percent are people of color, according to the 2000 Census. West Oakland is the poorest neighborhood in the Bay Area, where 55 percent of the households earn less than $25,000 per year. In addition to its rich African-American history, West Oakland has growing Latino (16 percent) and Asian (9 percent) populations.

Three freeways, the Port of Oakland, and the Oakland Army Base border the neighborhood. According to the City of Oakland, more than 20 truck-related businesses operate in the neighborhood. Every day, thousands of diesel trucks travel through West Oakland to drop off and pick up containers from docked ships at the Port, which is the fourth busiest in the nation. The Port estimates that its planned expansion will almost double the amount of truck traffic in the area—generating 22,000 truck trips per day by 2010. All told, there’s a lot of truck traffic in this small community, which contributes to the diesel pollution and dirty air.

Not surprisingly, diesel pollution was one of the top environmental concerns identified by residents and community organizations through the West Oakland Environmental Indicators Project (WO EIP). The WO EIP began as a partnership between the Pacific Institute, an Oakland-based non-profit research organization, and the 7th St./McClymonds Corridor Neighborhood Improvement Initiative, a community-based organization. Pacific Institute chose West Oakland as the pilot site for a Neighborhood Environmental Indicators Project because of the environmental issues faced by the community, the history of community activism, and the opportunity to support community revitalization efforts facilitated by the 7th St. Neighborhood Improvement Initiative. The WO EIP is now a fully community-run initiative based at the Coalition for West Oakland Revitalization (CWOR).

The Project
From its inception, the project was designed to support a community-driven process. The WO EIP established a committee of neighborhood residents who served as the community “conscience” of the project. Through a series of meetings in 2000, the WO EIP sought to define the term “environment” in the context of West Oakland; identify environmental issues in the community; select indicators that community members wanted to measure and track; and determine how such information would be incorporated into current advocacy, policy, education and organizing work.

By July 2000, the WO EIP Committee had agreed on a core set of indicators. Indicators convey information about the quality of life in a community: its economic vitality, the strength of social institutions, the well-being of residents, and the state of the environment. But indicators are more than just a measurement tool: they reflect the values of those who select them. The indicators concerning residents most included truck traffic, indoor and outdoor air quality, and asthma. (See WO EIP Indicators final report at www.neip.org.) 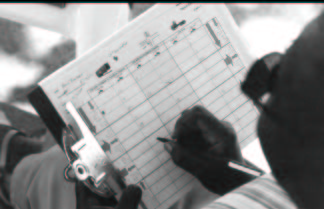 With help from foundation and agency funders, West Oakland residents and organizations designed and conducted their own neighborhood study of diesel trucks in partnership with the Pacific Institute. Over the course of five WO EIP meetings, committee members identified questions that needed to be answered in a Diesel Truck Study: where and when trucks were traveling and needed to be monitored; a list of potential technical assistance contractors; and previous diesel studies. They also discussed how the information could be disseminated to community audiences and used to generate change.
After a series of more meetings, the coalition decided to conduct three studies: a truck count on residential streets in West Oakland and a truck idling study; an inventory of diesel emissions in the community; and an indoor air monitoring study. Ten West Oakland residents were hired and trained to conduct truck counts on selected neighborhood streets. Other residents volunteered to measure levels of pollution in their homes with a specialized instrument designed to measure diesel soot. This was then compared to levels of diesel soot in homes in another part of Oakland. The results we found through these studies and existing sources, were shocking (all study methodologies and results are available at www.pacinst.org/reports/diesel). They include:

From Study to Solutions
While our studies confirmed what many residents already knew—that West Oakland faces a disproportionate burden of environmental and health threats from diesel pollution—we also found that there were many opportunities to reduce diesel pollution and truck impacts in West Oakland. Solutions include: stepped up enforcement of illegal truck traffic; moving truck-related businesses away from residential areas and on to land owned by the Port and Army Base; the installation of electrical hook-ups so trucks waiting to enter the Port don't idle; financial incentives to get the dirtiest trucks off the road; and the creation of new truck routes with signs and other outreach to ensure that drivers know the right route. The final report of our work, “Clearing the Air: Reducing Diesel Pollution in West Oakland,” has a detailed list of these solutions (www.pacinst.org/reports/diesel). 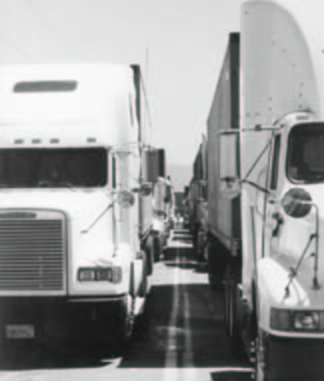 Since the release of the report, we’ve made progress in putting these solutions in place. We've held a series of meetings with City of Oakland traffic engineers to designate a truck route away from neighborhood streets. And, we’ve been working with the City of Oakland and the Port of Oakland to move truck-related businesses out of West Oakland and on to the Army Base site. Through ongoing meetings with the director of the Bay Area Air Quality Management District, we obtained commitments to put Air District resources and staff behind the effort to reduce diesel pollution in highly polluted communities such as West Oakland.

We were also able to help advocate for the allocation of $1.5 million in Air District funds to the Port of Oakland, with community oversight and input into how the money would be spent. And the WO EIP Committee recently signed a partnering agreement with the federal Environmental Protection Agency to develop a collaborative process involving all stakeholders in implementing the diesel reduction solutions identified in the report.

We are excited and gratified that the collaborative, science-based approach we have pursued is starting to make a difference for the people of West Oakland. Our study has demonstrated the power of residents and community groups—armed with the information they need—to fight for environmental justice and clean air. It has also shown the importance of supportive partnerships between research organizations and community residents. But despite the progress, much more needs to be done: relief cannot come too quickly for those who are breathing dirty air, suffering from asthma, or living in polluted communities.

Meena Palaniappan directs the Community Strategies for Sustainability and Justice Program at the Pacific Institute, a non-profit research organization based in Oakland.

Tweet
‹ Case Studies in Community-based Science up Hogging the Land ›