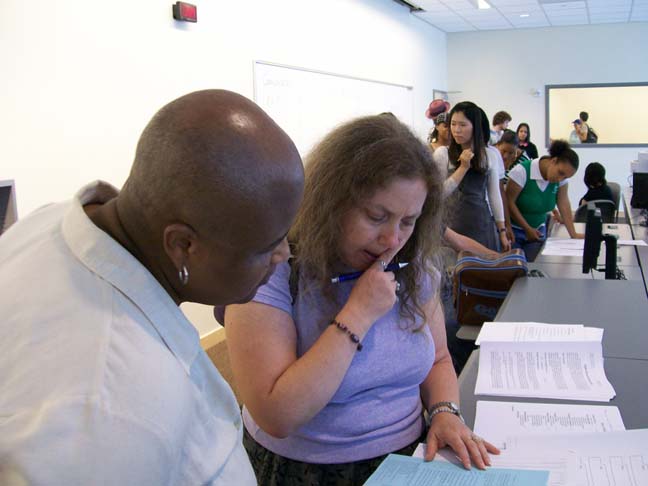 As I take roll, noting that nearly a third of the class is absent, I scan the faces of my students. As usual, the international and immigrant students—representing Iraq, Yemen, Iran, Pakistan, Korea, China, Mexico, and Guatemala—are present. The rest are a diverse mix from Berkeley, Oakland, and the greater Bay Area.

But it’s Nancy and Alex who most embody the twin challenges I face as a community college instructor attempting to implement, insofar as the system will allow, the principles of popular education or critical pedagogy. Nancy is having greater difficulty learning the Standard dialect of English used in academia than either Kaman who is Thai or Daniel from Mexico. Alex is one of roughly half of my students who are African American and who have gotten  inadequate education in the public school system of California but who still hope to find their way to the other side of the tracks, through California’s community colleges.

Instruction in skills requires a focus on the text (and the “mechanics” of writing), while the development of critical thinking or “conscientization,” requires a focus on the macrocosmic context. While I attempt to implement popular education with these two aspects of my curriculum, like most instructors using this approach, I frequently find myself caught between student expectations and the limits of a system which seeks only to reproduce itself.

Formidable challenges confront the teacher who tries to forsake rote pedagogy in favor of developing consciousness and other creative routes to knowledge. My students’ expectations are created by the very system that oppresses them and are firmly established during the twelve or so years of education prior to my class. In that system, based on punishment and reward, creativity and critical thinking are unwanted interlopers. The teacher may invite students to attempt creative solutions to problems, but the students, almost universally, are only concerned about “good grades,” which implies giving a “correct,” rather than a “creative” answer. Not surprisingly, the “correct” answer is always the one which reaffirms the coercive system. So, an instructor’s first task in the liberation of his or her students, is to win them over to their own side.

All of my students believe that the power to improve their lives and the lives of their families is only available through the educational system—a belief propogated by a system that says that those who do not “succeed” have only themselves to blame. (Fully 75 percent of college students expect one day to become millionaires, according to a survey conducted by Ernst & Young.)1 The truth, of course, is that there is a systematic failure in education within the United States.

A recent San Francisco Chronicle front page story on the “No Child Left Behind” program shows that one third of California’s high school seniors neither gained skills to have meaningful work lives, nor received diplomas in 2006. The “education” agenda of the capitalist system too often leaves children and youth behind, offering people like Alex the option of going to future illegal wars, or working as near-slave labor in the prison-industrial complex. (Unemployment among black youth in Oakland is around 80 percent.)

Jenny Lowood, head of the English Department at Berkeley City College (BCC), has incorporated many aspects of Paulo Freire’s “pedagogy of the oppressed” into the teaching process. Among them is the choice to use texts, such as Barbara Ehrenreich’s Nickel and Dimed and Howard Zinn’s A People’s History of the United States, in her basic skills English class. I, too, have chosen not to use traditional textbooks and select my readings from websites, such as counterpunch.org and commondreams.org, in addition to writings by Ehrenreich, Zinn, and others. One semester, my class spent several sessions uncovering the Bush administration’s lies about Iraq, then wrote critical essays based on the readings.

Predictably, reactions to the readings vary, depending on student background. Students of color tend to be aware of social inequalities and skeptical of government propaganda, whereas Caucasians are often surprised by the real history, the experience of low-wage workers, or the reasons for the war in Iraq. Even so, ignorance of particulars and the reasons behind the injustices tends to be fairly universal. But through the process of group discussions, clarity often emerges. And clarity of thought, as Orwell pointed out, is essential for clarity in writing.

Student-Centered Learning
Beyond the texts, a Freierian approach to education also means changing the directional flow usually set up in institutional models. “We call it ‘student-centered’ learning,” says Lowood, of the approach taken in BCC’s Writer’s Workshop.
The Workshop is a writing lab where students revise and finish papers for other classes. Although an instructor is present, the student assistants—many of whom have sharpened their own writing skills in that very workshop—are the real teachers. The curriculum, processes, and procedures of the lab were designed by the assistants and Lowood. Working from the premise that everyone has knowledge, or that “most people are intelligent,” as Lowood puts it, and that the aim of education is to build on and extend that knowledge, the workshop takes an inductive and Socratic approach. Rather than edit the papers, instructional assistants are encouraged to fill in gaps in knowledge, and ask critical and productive questions of the students. They push writers like Nancy and Alex to recognize their own wealth of knowledge and to find their own solutions to the problems in their papers whenever possible.

Although helpful in learning new skills, the critical approach does nothing to address the social and political structures of the system that may exclude the students from the very workplaces they are training for, or to change the system that recruits them to fight or support illegal wars. But inefficient and unreliable as it may be in undermining the system, critical education is one of the few legal instruments at hand for such a task.

Clifton Ross is a freelance writer and videographer who teaches at Berkeley City College.

Download or view a pdf of this article (230KB).

Tweet
‹ Y-PLAN: Teaches Youth Why and How to Plan up Seven-Year-Olds Lead A Strike ›