Marcos Leyva: Building the Base 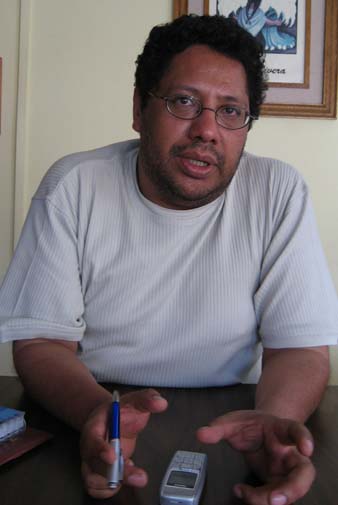 The first program, “Building Citizenship,” focuses on promotion of integral communitarian development. It generates actions to help people develop an awareness of their rights that can lead to informed participation. This goes beyond the mere act of voting; the goal is to generate activities that allow political involvement, such as participation in communal development councils.

The second program is aimed at strengthening of communitarian organizations by generating economic activities, such as savings banks and cooperative supply stores in the Oaxacan indigenous communities.

Finally, through supporting initiatives that strengthen civil society, the third program deals with municipios* and the indigenous communities that live there. Our activities here are aimed at building a closer relationship with the indigenous authorities; we instruct them and help them form democratic systems so they can perform as municipal authorities.

Process, not Success, is Key
In all of this, we use the experience and the pedagogical/political proposal of popular education, which Paulo Freire started in Latin America. Like Freire, we firmly believe that starting from such educational and organizational processes enables the population to regain access to their rights to demand participation and better living conditions.

Since we start from the concept of popular education, we deal with processes that are not enclosed in a one- or two-year project timeframe. For example, we’ve been working during the last seven or eight years in communities, such as Santiago Izcayutla. There, we have had various collaborations aimed at generating political, organizational, and economic capacities. As a result, the municipio’s inhabitants are becoming empowered  and claiming their rights.

When we started with the Building Citizenship program, the residents were fighting a local cacique.* He wouldn’t allow them to elect their municipal authorities and imposed his personal choices for the municipal presidency. In response, a process of reflection and organization began taking shape. The first years of struggle we had plantones.* These were hard battles, which sometimes resulted in deaths. But, after a great deal of sacrifice, the community finally gained the right to elect its representatives. From that moment, community members started to support economic and capacity-building projects with municipal authorities.

In this case, we’ve achieved our goal. First, community members got to know their rights; second, they came forward to demand these rights; third, a process of active, gender-inclusive participation has been generated in that municipio. The methodology and the perspective of popular education have been fundamental in generating educational activities that build people’s capacity to take possession of their new roles.

Building the Solidarity Economy
Five years ago, we began working with community groups to organize economic activities that would create changes in the social structure. We now have 20 projects grouped into a network of communitarian economic projects.

This network has allowed us to focus on economic, social, and cultural rights, in addition to economic issues. An awareness has been generated that you need more than economic projects to improve your living standards—you also need to link them to political processes, and vice versa.

Women and Culture
Inherent to all of these programs are the two strategic axes of indigenous people’s rights and the issue of gender. These are not separate topics: they are implicit and spread through all our programs. As part of the methodology, we start with men-only and women-only groups and then they share a common space for discussion. This leads to more mixed groups because women feel that they have a space to discuss things from their point of view.

There are some tensions due to individualism. We try to grapple with that by recalling that in the deeper sense, we are dealing with persons, not individuals. We insist on collective processes that help in the formation of persons. It’s hard to overcome the tendency toward individualism without communitarian processes that emphasize the formation of persons. We strive to find an equilibrium. It is difficult, but we concentrate on concientization* processes. We believe that when people internalize communitarian principles, they will understand that their efforts are going to have a positive effect to achieve social benefits.
We also ensure that the people’s cultural rights are taken into account and that the educational content is culturally relevant. We have 16 different indigenous languages and use a translator from the villages to help in the communication process. Educational materials are translated to convey the values of tolerance, diversity, and respect to their cultural background and start from the premise that each of us knows something and has something to say.

Popular Assembly of the Peoples of Oaxaca
The uprising was the result of 10 years of consciousness-raising by the teachers’ unions on behalf of people’s politicization. It achieved a lot, even if not enough.

But despite the public school teachers’ participation, the schools themselves are not truly part of the process. The teachers cannot use educational materials and facilities because those “belong” to the official programs and are meant to be used for formal education purposes. Teachers can’t do popular education inside the schools, so they teach outside their schedule and outside the formal system. This kind of popular education work by teachers aided in forming this solidarity system. The churches—especially the Catholic church—also helped, since they adhere to liberation theology’s preferential option for the poor. They have carried the spirit of solidarity and responded to popular needs since the 1970s through forming Christian groups and doing capacity-building. Leftist parties have contributed in forming leaderships, too. And then there are non-governmental organizations like ours. These four are at the base of this movement. Together we have been able to encourage people to take the path of increased awareness and demand their rights. Most of this is due to popular education.

Prospects for Change
We’ve struck a big blow to the political system in Oaxaca. We have to strike again so it falls, but I believe the system has received a deadly hit. Many things are happening in our communities. We think we’re on the path that leads to deeper changes—not only the change of the Oaxacan governor but the transformation of Oaxaca. Despite our struggles and our accomplishments, power is still centralized. Changes are slow to come. Yet, people are participating and becoming mobilized. We hope that people keep on participating, but it’s tough. At this moment we’re simply full of hopes.

Based on an interview with Marcos Leyva, director of EDUCA, by B. Jesse Clarke, Oaxaca, April 2007. Translated by Franco Munini.

Download or view a pdf of this article (256KB).