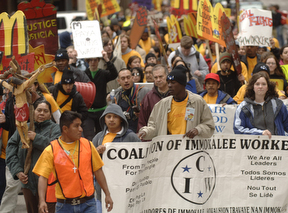 With its streets full of the smells of savory Caribbean and Latin cuisine, its sounds of many languages, and its population of Haitian, Mayan, and Latino peoples, one might mentally place the town of Immokalee in any number of locations, but probably not Florida. English is seldom heard here and Americans rarely seen in this town, which serves as a bedroom community for tens of thousands of migrant workers.

Likewise, the organizing strategies of the Coalition of Immokalee Workers (CIW)—the local farm workers’ association—have more in common with the grassroots struggles in Latin America than in the United States. In fact, the Coalition was founded 11 years ago by participants and allies of the campesino movements in Haiti and Chiapas, and the survivors of dictatorships in Guatemala.

The stated goals of CIW are economic justice in the fields; labor rights, including the right to work free from slavery; economic and political rights throughout the hemisphere enabling workers to thrive in their own countries; and the rights of immigrants in the United States.1 These organizing goals may sound utopian under any circumstances, but the sector in question—migrant laborers—is hands-down, the hardest group to organize.

CIW’s challenges include a constituency which is “ethnically and linguistically divided, largely undocumented… highly mobile, dirt-poor, largely nonliterate, and culturally isolated…. What’s more, farm labor is excluded from the National Labor Relations, denying farmworkers… the legal rights to organize and join unions.… And worse yet… workers pick up paychecks from three to four different companies each Friday evening…. There is no such thing as ‘Pacific Land Co.’s workers’ or ‘Gargiulo’s crews,’ there are only Immokalee workers and changing faces picking, planting, and pulling plastic in company fields on any given day.” Those who pick most of the produce consumed in the United States are, in short, “an employer’s dream and an organizer’s nightmare.”2

How, then, has this group attained some of the biggest victories for workers in recent history? How did it get Taco Bell, KFC, Pizza Hut, Long John Silvers,’ and A&W Restaurant to almost double the wages for tomato pickers in Florida? Or get them to agree to a verifiable zero tolerance policy for modern-day slavery and the right of farm workers to participate, through CIW, in developing and implementing an enforceable code of conduct? How did CIW get McDonald’s, the leader of the $100 billion-a-year fast food industry, to agree to even more stringent conditions this past April with just a whisper of a boycott? Why is Burger King showing an early interest in cooperating with CIW?

Part of the answer lies with CIW’s public mobilization strategy. The take-to-the-streets and put-your-money-where-your-mouth-is campaigns have moved the feet, hearts, and minds of multitudes in the United States, especially among immigrant rights networks and students. CIW’s campaigns rely on decentralized networks and go after the brand image, targeting the point of consumption rather than the point of production.3 More than 400 schools participated in the Taco Bell Boycott, and last October, CIW was able to galvanize 40 actions against McDonald’s in 21 states.

A fundamental factor in CIW’s successes in the food industry and its vision of transforming power is its base-building strategy. The underlying philosophy is “consciousness + commitment = change.” CIW’s methodologies are grounded in popular education, leadership by the base, and a truly horizontal democracy that requires staff to be voted in by members, and their salaries tied to that of farm labor.

According to Lucas Benitez, co-founder of CIW, “Popular education must be at the root of any movement that comes from the base. And it must come from the very people who are affected by the problems. Our popular education is accessible to everyone in our community, regardless of their language or level of formal education. It lets us build a broad base of leadership so that responsibility for the success of the movement doesn’t lie in the hands of just one individual whose loss could weaken the struggle.”

Popular education is also the vehicle that serves to explain the struggle to workers just coming into the community and to encourage their participation. Benitez says, “Popular education plants the seeds of consciousness that builds the commitment necessary to make change possible.”

Popular education is imparted through cartoons posted around CIW’s office and on Immokalee’s buildings. Vivid street art and popular theatre also play a part. CIW’s low-power radio station where members spin music, including traditional and political songs from back home, and share messages about workers’ rights, is yet another portal of popular education.
The education occurs in week-long training sessions facilitated by peasant leaders from Haiti or Central America, and in Wednesday night meetings led by newer members of CIW. The mottos that guide CIW’s organizing—“Everyone is a leader,” “He who does not analyze continues to be a slave,” or “From the people, for the people”—sprouted and grew out of the meetings, as did the strategies that guide CIW’s campaigns.

The consciousness nurtured by popular education is helping transform a vulnerable group into hard-core activists, many of whose members previously either did not know their rights, or were afraid to demand them. The organizing strategies have also succeeded in bringing together an atomized, dispersed population into a cohesive group with a common identity as exploited members of an unjust system who have the power to change their status. According to CIW, “It’s the shift from suing in court to assure that workers receive the minimum wage guaranteed by law, to fighting in the street as a community for a living wage; the shift from accepting as a given that farm workers are excluded from the laws that protect the right to collective bargaining, to organizing general strikes demanding the right to bargain as a collective.”4

The transformation brought on by education has spurred members to engage in sustained, aggressive action, such as hunger strikes, statewide marches, and national boycotts. The actions have, in turn, created a national awareness of the struggles of farm workers not seen in decades, and led to concrete changes in rights, benefits, and wages.

Furthermore, the education reaches far beyond Immokalee and the 3,500 CIW members when, for three or four months of the year, the men and women move north along the migrant stream, sharing what they have learned with other farm workers.
“Today,” says Benitez, “we have a voice where we’ve never had a voice before.”

Beverly Bell is the co-coordinator of the Other Worlds Collaborative and Winner of the 2006 PEN New Mexico Award
for Literature of Social Justice.

Download or view a pdf of this article (325KB).