A School Board for the People: Baltimore Freedom Fall 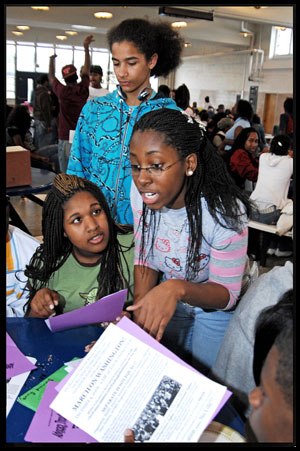 Freedom Fall: We are exposing Baltimore City to the world,” reads the registration card distributed and signed by students throughout Baltimore as a pledge of support for the creation of the Maryland Freedom Board of Education. The new body is a direct response to the Maryland Board of Education’s refusal to comply with a 1996 state court decision that called for greater funding for inner-city schools. In 2006, the state of Maryland shorted the Baltimore school district by $1.08 billion–enough money to pay 1,000 extra teachers for 10 years and purchase one million new computers.

While many cities across the United States face similar unconstitutional under-funding of school districts, most of the responses from opponents have played out in courtrooms. But Baltimore’s Freedom Fall is a grassroots movement organized and run by students who actually attend these inner-city schools. Mica Artis, a Baltimore high school student and Freedom Fall organizer explains, “It’s what we need, not what someone else says we need.”

The name Freedom Fall is a reference to the 1964 Freedom Summer in Mississippi, a project of the Student Nonviolent Coordinating Committee (SNCC) that brought hundreds of northern college students down south to “open Mississippi up” by challenging the disenfranchisement of Black folks and exposing the racist power structure of the Jim Crow South. It is no surprise that organizers with Freedom Fall connect to this history and see themselves as continuing this legacy of struggle.
The city of Baltimore is predominately Black and—like most other inner cities in the United States—is highly segregated, systematically denied resources, and facing widespread poverty. Comparing Baltimore school districts—with their large class sizes, old books, crumbling buildings, and unqualified teachers—to the predominately white suburban school districts of Maryland, exposes a school system that is “separate and unequal.” According to studies conducted by the Harvard Civil Rights Project, there has been a rapid trend of re-segregation across the country, thanks to decisions made by the Supreme Court in the last decade. This has contributed to a “growing gap in quality” between schools in white communities and those in communities of color.

Civil Rights Roots
The main organizers of Freedom Fall are also members of the student-run advocacy committee of the Baltimore branch of the Algebra Project, an organization founded by former SNCC organizer, Bob Moses. The Algebra Project’s goal is to build math literacy, which Moses describes as the key to challenging a “sharecropper education,” an old term that could perhaps just as accurately describe our modern education system. With an understanding that inadequate math education is used as a method of exclusion from a technology-based, post-industrial United States, the Algebra Project tutors students, beginning as early as middle school. The Algebra Project encourages students who have come through its tutoring programs to mentor other students and organize for education as a civil right.

Just as SNCC registered voters and created the Mississippi Freedom Democratic Party, freedom schools, and community centers, the Freedom Fall project also employs a dual strategy of both pressuring the political structure and building new institutions that can meet direct needs. Students in Baltimore have been organizing for adequate education funding for years by using tactics such as civil disobedience, demonstrations, and strikes.

Like Freedom Summer, Freedom Fall began with registration cards. Students were asked to rate the education that they receive and write down a topic about which they wanted to learn. Students were also asked to help occupy libraries, cafeterias, and gyms and hold freedom schools. They educated other students about under-funding, the goals of Freedom Fall, and the topics the students wanted to learn about—from the Black Panther Party to the history of racist schools, liberation poetry, and the Algebra Project.

Following these Freedom Schools, on October 14, 2006, hundreds of students and their supporters marched through Baltimore, holding signs reading, “No Education, No Life.” At a local church they held the first session of the Freedom Board of Education, a new body made up of students and adult allies who serve as the “primary commissioners on education for the state of Maryland.” They demand that the state of Maryland “comply with Circuit Court orders” requiring that the $1.08 billion withheld by the state be paid to Baltimore schools.

In preparation for November’s elections, the Freedom Board of Education wrote a letter to all gubernatorial candidates, announcing its formation and insisting that the new governor comply with their demands. They also began discussing a new budget proposal for schools, and are asking the administration at Baltimore High School to overturn the suspension of 50 students who organized a sit-in in solidarity with their efforts.

Ultimately, the goal of the body is “to become the Board of Education for the people,” says its chair, Chris Goodman. According to organizer Fernandes Harlee, “if the system doesn’t work for us, we need to make our own. We can’t wait anymore.”

Jacob Rosette is an organizer with ALL CITY, which organizes in New York City on student and youth issues. This article was compiled from interviews with Freedom Fall organizers Mica Artis, Chris Goodman, Chelsea Carson, and Fernandes Harlee.
Reprinted from Left Turn magazine.

Download or view a pdf of this article (200KB).

Related Stories:
Education
Tweet
‹ The Lessons of Freedom Summer up The Drive to Oust the Middle Class from Inner City Public Schools ›