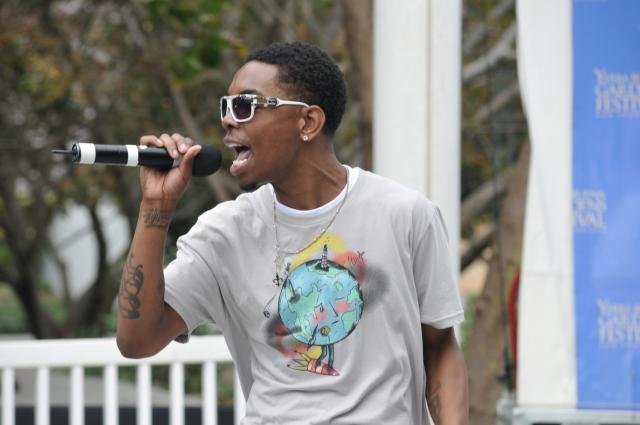 Twenty-year-old aspiring rapper Tre Pound was born in San Francisco’s Hunters Point, a predominantly low-income community of color with the dubious distinction of housing the two most toxic Superfund sites in the United States, as well as power and sewage treatment plants. Asthma, cancer, and diabetes rates in that area are all disproportionately higher than in other parts of the Bay Area. “I kinda knew where I was living wasn’t environmentally safe,” says Pound, but the public school he attended provided little information about industrial pollution or climate change.

Pound says he frequently incorporates socially-aware themes into his music, but he had never made an environmentally-aware rap song until he signed up to compete in Grind for the Green’s (G4G) Eco-Rap battle. He ended up winning the competition, earning a $1000 prize and studio time, by outpacing several other contestants with his eco-friendly flow during G4G’s second annual free concert at the Yerba Buena Gardens in San Francisco.

Pound is just one voice in the growing number of youth voices engaged in community organizing for social change. Millions of young people around the world participate in social activism. According to Wiretap Magazine, there are more than 600 youth-led community organizations currently creating green jobs, removing toxic waste, combating corporate pollution, and fighting against violence in their communities.

The undeniable reality of climate change speaks to the need for greater awareness and eco-sustainability among inner-city residents and people of color. Green has become the new face of youth activism, and today’s urban eco-activists use hip-hop as their medium.

Powered entirely by solar panels, the G4G event attracted hundreds of youth, their parents, community members, hip-hop fans, and members of other environmental activism groups, like Green for All, Alliance for Climate Education, and BayLocalize. 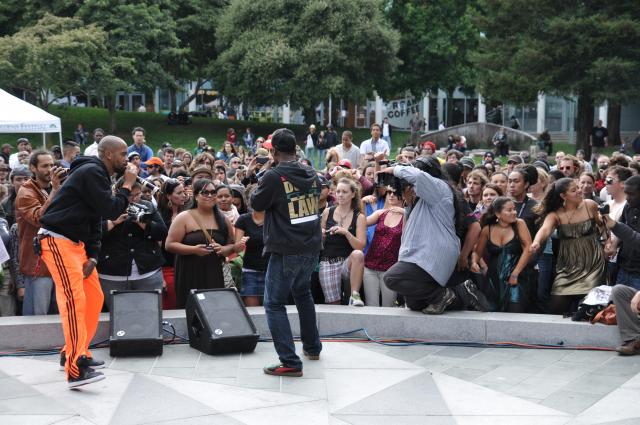 G4G Executive Director Zakiya Harris says she is utilizing hip-hop to focus young people’s attention on environmental issues. “We have to make it culturally relevant and engaging,” she explains. According to stic.man of dead prez, who headlined the concert, the green hip-hop movement is about empowerment, information, and economics—allowing people to “stop being just consumers and victims of corporations,” while “producing and providing those alternative resources that we need.”

During the concert, Oakland rapper Mistah F.A.B. showcased his community-minded side with material like “If ‘If’ Was a Fifth”—in which he muses, “What if poverty was gone and there was no more war and hunger?” At the conclusion of his performance, he announced that he was donating his $3,500 performance fee to the upcoming Green Youth Media Center, a joint project between G4G, Art in Action, Weapons of Mass Expression, and other progressive non-profit organizations.

The first of its kind in California, the Green Youth Media Center symbolizes the hope of green hip-hop activists like G4G’s Harris and Ambessa Cantave and Art in Action’s Galen Peterson, who envision similar centers opening up all over the United States.

The center, which opened its doors in October 2009, is a green building offering vocational, arts, and new media training; music production; youth leadership and violence prevention training; and green jobs education; as well as creating green revenue streams by selling art, music, and merchandise produced by its participants.

In order to teach urban youngsters about climate change, “We literally have to change their climate… their social climate,” Cantave explains. “We’ve related [climate change] to their health. It goes back to telling the story of something they already know; where they’re from.” 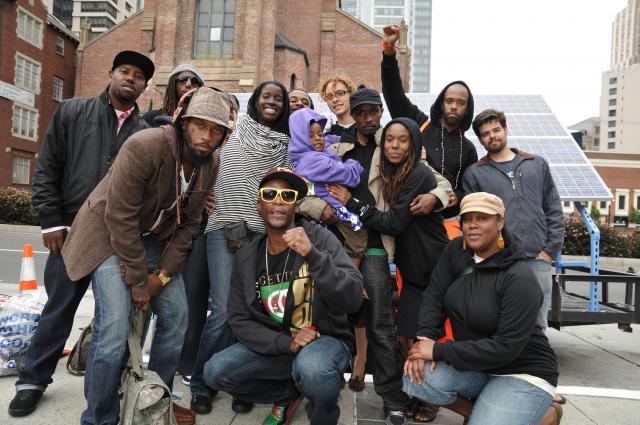 The emergence of green hip-hop activism represents the latest development in the ongoing movement to mobilize young people—a line connecting Mother Jones’ 1908 march of 100,000 child laborers from rural Pennsylvanian coal mines to Washington D.C., to the Student Nonviolence Coordinating Committee’s organizing around civil rights issues in the 1960s, to the Books Not Bars’ fight against the juvenile justice system in the early 2000s. These days, young people are organizing around community-sustainable platforms combining social justice with a burgeoning environmental awareness.

“You can’t start out talking about three million parts per billion of carbon,” Cantave says. “It’s not just something about polar bears.” Inner-city kids like Pound “have an innate sense of justice,” he says, “but haven’t yet connected that to the need for environmental justice.”

Eric K. Arnold is a writer and photographer based in Oakland, California who has been documenting emerging hip-hop and youth activist movements in the Bay Area since 1994.