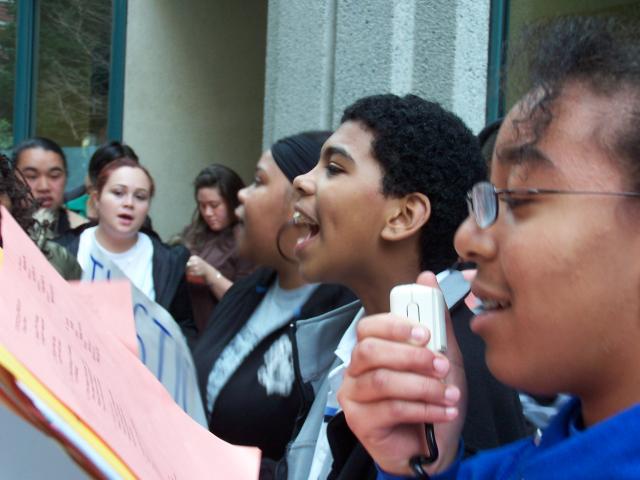 Charisse Domingo, 35-year-old associate director of Youth United for Community Action (YUCA) in East Palo Alto, California has worked with the organization since she was 21. The youth-based non-profit operates out of a one-story house on a residential street in this tiny (2.6 sq. mile) Silicon Valley city of about 30,000 people, 94 percent of whom are people of color. This community of mostly small single-family homes has recently been (literally) overshadowed by new multi-story condominium buildings and big-box retail giants. The location of Romic Environmental Technologies—a hazardous materials recycling firm—in East Palo Alto was in stark contrast to the Facebook and Hewlett Packard campuses of neighboring upscale Palo Alto. It was a sobering reminder of the city’s 19 percent poverty rate. But residents of East Palo Alto organized to shut down the plant and to fight gentrification. In 2007, the Department of Toxic Substances Control ordered Romic to cease handling hazardous wastes.

How did YUCA get involved with the battle against Romic?
YUCA started out in 1994 as an internship program for youth. Young people of color were put into different environmental justice programs throughout California, including the Bay Area and Los Angeles. At the time, the Ujima Security Council, an environmental justice neighborhood group from East Palo Alto, was fighting Romic and YUCA brought some young people into the campaign. YUCA’s first public involvement occurred after Rodrigo Cruz, a Romic employee, was injured while cleaning a toxic tank because of a hole in his chemical suit.

Cruz was not trained to do that job but was filling in for someone else that day. When he told his supervisor what had happened, they wrapped him up in 72 inches of duct tape, which caused him to pass out and receive permanent brain damage. Romic wouldn’t take responsibility and initially, the California Division of Occupational Safety and Health (Cal/OSHA) just wanted to fine Romic $5,000—not a penny of which would have gone to Cruz. YUCA and the community wanted to get some accountability from Romic and fair compensation for Cruz’s injury.

What’s noticeably different about East Palo Alto now that Romic has shut down its site?
For one, East Palo Alto no longer has those towers next to the Bay spewing out chemicals. Romic was located adjacent to a walking trail that completed the “Emerald Necklace” Bay Trail, ruining the view with its obtrusive towers. Now the towers are not there anymore! Previously, East Palo Alto residents used to say, “We don’t have a grocery store, we don’t have a high school, we don’t have basic resources. what we do have is a toxic waste plant and a concrete batch plant.” People can’t say that anymore. That’s the difference.

The work that YUCA and folks in the community did gives people a chance to re-imagine what this area should be about. We can get caught up in technical terms like “land use” and stuff, but the basic conversation goes: “What does our community mean, and what can it look like?” That conversation is a lot more meaningful and has to be owned by the community because ultimately, it was the community that shut Romic down.

How does your work relate to the larger issues of environmental and climate justice?
Our understanding of the work was always grounded in the question: “What is environmental justice and what does environmental racism look like in our community?” We looked at what was in our community: A toxic waste plant. Why was it there? Then we began to see the big picture. If there are 53 toxic waste plants in California and 52 of them are located among communities of color… there is a problem. Our work was not about connecting theory to groundwork, but the other way around. If the issue wasn’t direct—in our own back yard—it would not have entered our minds.

Now that the battle with Romic is won, how do you see YUCA’s work?
YUCA is owned by the community. The elders here are a part of the process, too, even though our identity is with the youth. Back in 2000, when we were still fighting Romic, it wasn’t a question of “Should we fight against something because we are only involved with Environmental Justice?” The youth felt that if we were shutting down the toxic waste plant only to have other developments come in and wipe out our community, we were fighting this in vain. So, I think, YUCA is always going to be about East Palo Alto first. However, we know that we are linked to the larger Environmental Justice movement in the Bay Area and to the youth-based Environmental Justice networks in the Central Valley. But we are also working on gentrification, immigration, and education issues.

Tell us about YUCA’s “Toxic Tours.”
We have had many different groups—community, youth, and students in Environmental Justice classes—come on the tours. But the tours are not just an outreach tool. They are also about education, because we always end with the question: “Given all these issues [that] we have been dealing with, why do people choose to stay here in their own community?”

Was it difficult to get local leaders to support the community over the tax revenue-generating Romic?
Until voters passed Measure R, Romic was just paying a regular business tax. But the debate about Romic wasn’t just about generating tax revenue or employment. (Of the 200 employees, only seven were from East Palo Alto.) It had a lot to do with people questioning Romic’s contribution to the health of the community. As we went door-to-door, people started talking about [the incidences of] cancer in the community. And they were making a link between that and the toxic waste plant right there in their backyard. There was the moral question of why this toxic waste plant was even located here.

Of course, Romic called itself a “recycling business” even though it was doing the exact same thing it did in the 1950s. Because it was “recycling” all these toxic chemicals—and included the word in its name—Romic could be categorized as a “green” business creating “green” jobs. But when it came down to it, they were just another negligent toxic waste facility that put not only their workers at risk, but also the community. And the government allowed them to do it even though they had been operating on an expired permit since 1991.

As a result of this negligence, people got hurt. Besides Rodrigo Cruz, there was Froilan Chan-Liongco, who received second- and third-degree burns in an incident that occurred after the permit hearing was held.

For two years after the permit hearing, no decision was made! The community was really fed up with it all and I think the campaign shows that if a community just persists, it can win. It was only after the changes in the City Council that things began to take a different direction. Instead of giving in to the environmental racism, which said that East Palo Alto had to carry the burden for San Mateo County’s industries, the City Council, along with the community, began to ask: Why?

Vu-Bang Nguyen is a program coordinator at Urban Habitat. He works with the Great Communities Collaborative project in East Palo Alto.