The Case for Holistic Economic Transformation

Marta Castillo has been a worker-owner of Natural Home Cleaning (NHC) for three years and served on its Board of Directors for two years. In addition to the hours she puts in cleaning houses with non-toxic cleaning products, she spends time with the other worker-owners coordinating the worker and owner aspects of the business. 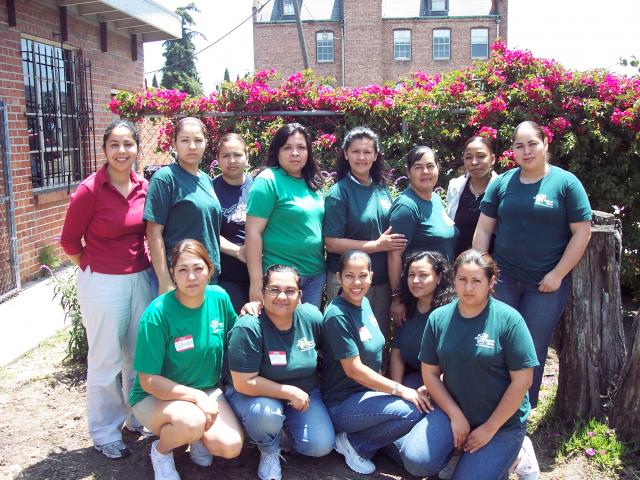 This work has provided much more than a stable income for Castillo who lost her daughter to an illness shortly after coming to this country from Guatemala. “I was in a depression,” she says. “Becoming a member of the NHC cooperative helped me to keep busy and to recover.”

Castillo and the other women of the coop are creating meaningful work for themselves out of one of the lowest-paid, most isolating, and often dangerous industries by using nontoxic cleaning supplies and improving worker control over working conditions. This sort of holistic transformation of everyday work on a planetary scale will be the key to overcoming the ecological crisis that now confronts our species because of our ever-expanding industrial extraction, production, and waste generation. Humanity needs to channel its growth not toward increasing material consumption but toward core human values.

A transition to a more sustainable economy will require people living in more cooperative ways in denser urban neighborhoods rather than in suburbia. It calls for local generation/harvesting of power, water saving, urban farming, and collective kitchens. We need to prioritize the reclamation, rehabilitation, and transformation of existing resources. Despite study after climate study, which says “it’s worse than we thought,” we continue to seek technological fixes like carbon capture or solar panels, rather than holistic solutions that seek to transform the system that got us into this crisis.

To be truly transformative we need to work toward filling the spiritual void left by an economy based on individualism, consumption, and exploitative waged labor. We can do this by learning to live more cooperatively and setting our focus on “roles” rather than “jobs” in seeking social progress over growth.

Some of the more important emerging “roles” in a more socially conscious future will include renewable energy technicians, deconstruction and adaptation/ re-use experts, and greywater and water catchment builders.

“Greywater is a simple and effective source of irrigation water that can help reduce water demand by 15 to 50 percent in an average home,” says Laura Allen of Greywater Action. A new state building code supports simple, low cost systems, opening up a whole new market for greywater installers. Allen says intallers could save “800 million gallons per week, just by reusing water from washing machines to irrigate.” Amidst water shortages and droughts, this could be a major source of water for food security and healthy landscapes in California.

An Age for Living More Compactly
Restoration of soil, water, air, and habitat requires understanding our ecological limits and finding ways to live within them. As people begin to live more compactly and cooperatively we will need more peer counselors, facilitators, organizers, mediators, and educators to help reweave the fabric of our communities by restoring our ability to communicate and work together. We will need the capacity to relate to each other, organize ourselves, make the decisions that affect our lives and our world, and work together to get things done. For instance, it makes much more sense for adjoining buildings to share washing machines, water tanks, even solar hot tubs, than for each to buy their own. Working through conflicts that arise when sharing is a social skill that many of us have lost. Shifting the debate to focus on meeting people’s real needs—materially as well as socially and emotionally—will be critical to winning a just transition.

Rahula Janowski, a volunteer mediator with Community Boards, makes the point that: “Through conciliation-oriented mediation, we don't just come up with solutions to the specific conflict, but work to repair and strengthen relationships, while modeling the kinds of skills we all need to develop to better manage the conflicts that arise when we work and live together.”

Women currently do much of the under paid or unpaid labor in these arenas. “Women’s work” and the skills that women bring to reproductive and community labor are keys to an economic and ecological transformation of society.

Deb Goldberg, general manager of the NHC cooperative says, “I surveyed the members on what they value most about the work. The responses were: 1) Salud, or health; 2) Convivencia or community, and 3) Respaldo or knowing someone has your back. Income [was] usually not even in the top three!”

Learning to work together on a shared project can help people develop self esteem and the respect of their peers—both critical human needs. The women of NHC play many roles—as house cleaners, trainers, facilitators, decision-makers, and members of a team that learn together and support one another. Such a cooperative approach will be key to transforming our communities.

Why “Green” Is Not Green Enough
Mainstream advocacy for creating “Green Jobs” by expanding targeted manufacturing and service industries plays into the belief that increasing economic growth or gross domestic product is the only way to meet people’s needs. It is time for climate advocates to accept the idea that reducing material economic output has to be part of the solution to the ecological crisis.

Maria Mies, sociologist and co-author of Patriarchy and Accumulation on a World Scale: Women in the International Division of Labour, says "The idea that industrial society and industrial monoculture are the most productive systems continues to dominate... That's why [women's work and urban and rural subsistence farming] isn't included in the gross national product; only [that which] can be measured monetarily… Biodiversity—the symbiosis between animals, plants, and people, all living together in a certain area, [creating] livelihood and [a] good life—you can't achieve that by putting together as many monocultures as you like.”*

Historically, capitalism has pushed people into waged work—whether off the land or out of the home—in order to survive. This patriarchal process excludes most social labor from the realm of so called “real work” that is given monetary value. In other words, the work of mothering does not show up in the GDP, nor can a woman use it on her resume when seeking employment after raising children.

Clearly, “real” work is not just done under hard hats but around kitchen tables. A shift in focus from hard hats—even “green” hard hats—to aprons will help us shift from “growth” as the driver to social well-being.

* Mies, Maria. Adapted from a translation by Lisa Rosenblatt. Transcribed from video by O. Ressler: The Subsistence Perspective. http://republicart.net/disc/aeas/mies01_en.htm (2005)

Michelle Mascarenhas-Swan was most recently co-director of the School of Unity and Liberation in Oakland, California. She co-founded the Center for Food and Justice in Los Angeles and is currently a strategic consultant to Movement Generation in Oakland.