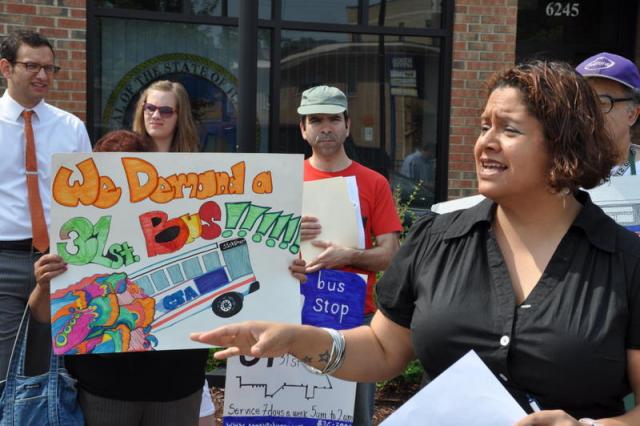 A Battle for Climate Justice

It was a historic moment for the United States when President Barack Obama stood before 100 world leaders at a high level United Nations Climate Change summit and admitted the historical responsibility of the United States in the climate crisis. He went so far as to say that the largest economies have “a responsibility to provide the financial and technical assistance needed to help [developing] nations adapt to the impacts of climate change and pursue low-carbon development.”

This is a significant breakthrough since the issue of global warming hit the international stage in the late 1970s. The Clinton/Gore years saw the capitulation of the administration to the oil industry, while the Bush administration went into outright denial—questioning the science and shamelessly walking out of the Kyoto Protocol talks. Nonetheless, the question remains: Now that we have publicly acknowledged our responsibility as a polluting imperialist power—what are we going to do about it? What is our tactical plan?

The Climate Bill: An EJ Nightmare
The American Clean Energy and Security Act (ACES) proposed by the Obama administration essentially gives billions of dollars in incentives to corporations and creates massive human rights violations in communities of color and third world countries. Many within the climate justice movement consider this legislation an environmental justice nightmare.

Sponsored by Congress members Henry Waxman (D-CA) and Ed Markey (D-MA), ACES is the first legislation approved by the House of Representatives meant to curb the heat trapping gases scientists have linked to climate change. But the bill only reduces emissions levels to four percent below 1990 levels by 2020, whereas, the United Nations Intergovernmental Panel on Climate Change requires at least a 40 percent reduction by 2020.

As one of the world’s largest emitters of green house gases—historically and at present—the United States should actually be reducing its emissions to 90 percent below 1999 levels by the year 2020. At least, that’s the consensus among climate scientists.

Even as the environmental justice movement struggles to bring relevance to the climate bill debate, conversations are underway about another major piece of climate legislation that could have serious climate repercussions for centuries. Its the Federal Surface Transportation Act (FSTA), currently in its first draft in the House Transportation and Infrastructure Committee.

Transit Riders at Center of Environmental Policy
Transit Riders for Public Transportation (TRPT) is a national campaign to reframe the debate by demanding that it place scientific reality about the climate crisis front and center. It is just not possible to achieve the necessary emissions cuts without the radical step of changing the current funding formula for the transportation bill from 80 percent for roads and highways to 20 percent, and allocating the rest for public transit. 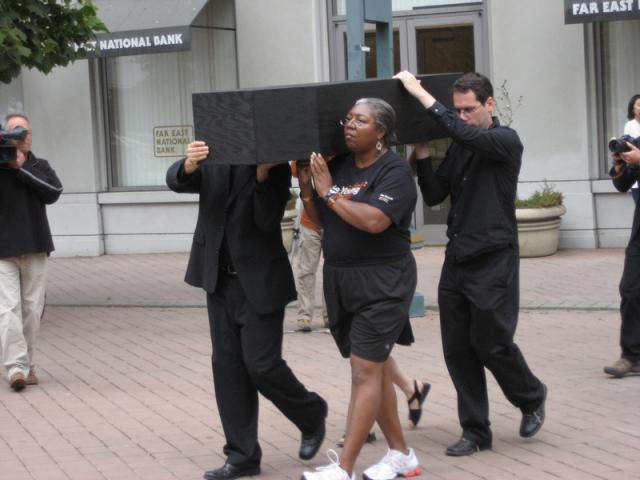 The next $500 billion Federal Surface Transportation Act must be discussed and developed within the context of climate change given that the United States with its automobile culture produces almost half of the world’s automotive emissions. As scholar and environmentalist Bill McKibben points out, “We're in a desperate race. Politics is chasing reality, and the gap between them isn't closing nearly fast enough.”

The FSTA—which has its roots in the Eisenhower Era and the interstate highway bill of the 1950s—is reauthorized every six years, at times representing up to one-third of the budget for metropolitan transit agencies. For the past decade, many of us have been struggling in the courts, inside transit agency board rooms, and in the streets against fare increases, transit service cuts, and regressive sales taxes to make up a budget deficit created by massive highway and rail expansion projects. Most importantly, as organizations we have also been drafting our own vision for urban transportation and climate change policy and our national campaign program is a reflection of that.
TRPT National Demands
- A flip-flop of the current funding formula to drastically reduce highway funding while dramatically increasing public transit funding. Continuing federal support for a private auto system is a global warming disaster and will massively expand greenhouse gas emissions.
- A federal requirement to greatly reduce automobile use in all metro centers and the encouragement to use federal and state funds to create auto free zones, auto free rush hours, auto free days, bus only lanes on surface streets and freeways, and ensured viable transportation in rural areas and for the disabled.
- The allocation of at least 50 percent of the FSTA funding towards operational costs for transit systems with at least half of it restricted to bus operations. It would help stop the massive fare increases and service cuts and allow for more bus and rail service on existing lines. It would also encourage 24x7 transit service and through block grants, reduce all transit fares by 50 percent.
- Prioritization of capital preservation over expansion, with at least half of all capital funds restricted to bus fleets. Bus is the most cost effective way to move people in large urban and rural areas but has historically been short-changed by powerful rail lobbyists, which has led to the deterioration and bankrupting of our bus systems.
- Establishment of a Title VI provision that would prohibit racial discrimination, allowing private parties, such as civil rights and community groups, to bring discrimination complaints against any federally funded projects based on "disparate impacts."
- A mandate to dramatically reduce greenhouse gas (GHG) emissions and air pollution on all federally funded projects. Each project must be able to demonstrate at least a 25 percent reduction in GHG and air toxin emissions before they are funded. The Federal Transportation Authority and the Environmental Protection Agency should be allowed to receive complaints and given the power to stop projects.


A Campaign from the Ground Up
Over 16 organizations across the country have come together to lead the grassroots and legislative campaign initiated by The Labor/Community Strategy Center and Bus Riders Union in Los Angeles to influence the FSTA. “These are real people who are on the buses and trains, this is our leadership from our community coming out and speaking up for themselves,” says Kimberly Wasserman, coordinator for the Little Village for Environmental Justice organization in Chicago, explaining why she joined TRPT.

“Single mothers, the disabled, low income workers who have to travel two hours to get to their jobs—this campaign brings their demands, their transit vision to the same federal table where cement, auto, and construction have sat for decades,” says Manuel Criollo, organizer with the Bus Riders Union.

Riders in Los Angeles, Atlanta, San Francisco, and other cities throughout the country who negotiate their lives around public transit are also suffering from respiratory diseases, cancer, leukemia, diabetes, arthritis, and high blood pressure, exacerbated by air pollution and global warming. So, “Public transit is not a stepchild in the transportation mix. It is our key to fighting poverty, racism, and climate change,” explains Cecil Corbin-Mark, deputy director of WEACT for Environmental Justice and a TRPT member.

Our strategy is to focus on organizing bus riders, public health providers, community organizations, unions, and environmentalists across cities to pose a challenge to Congressional representatives within their own districts. Our outreach focuses on key leaders, including Senator Barbara Boxer, Chair of the Senate Committee on the Environment and Public Works, and House Committee members, Charles Rangel of the Ways and Means Committee, John Lipinski of the Transportation and Infrastructure Committee, and Congressional Black and Hispanic Caucus Leaders, Barbara Lee, John Lewis, John Conyers, Luis Gutierrez, Lidia Velazquez, and others.

Building a New Environmental Movement
While we can go on debating the growing gap between the climate crisis and the current Congressional proposals, it is ultimately up to us to build a movement that demands solutions commensurate with the scope of the problem.
People of every political bent—conservative, liberal, radical—can become allies in a movement of intellectual honesty that lets science, human rights, and the future of the planet lead. The new movement may have begun with scientists, urban planners, organizers, activists, and elected officials who are already focused on the environment, but it must reach out to peers in every “non-environmental” social field. It is a Herculean task but for those of us in the movement, it is also our job.