Ensuring a Clean Energy Economy for All

By Phaedra Ellis-Lamkins and Leslie Moody

The fight to pass the American Clean Energy and Security Act (ACES) through the House of Representatives this summer saw unprecedented leadership from communities of color. That left more than a few people bewildered. Green For All, Partnership for Working Families, the AFL-CIO Building Trades, the NAACP, the Leadership Conference on Civil Rights, and other civil rights, labor, community, social justice, and environmental groups formed a broad coalition that successfully helped strengthen and pass the bill with the support of representatives Bobby Rush, Emmanuel Cleaver, Ben Ray Luján, and other members of the Congressional Black and Hispanic Caucuses. 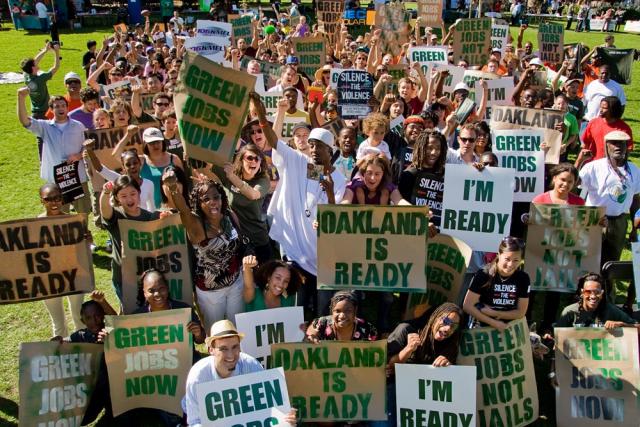 Why were low-income communities taking such a strong leadership role in climate and energy legislation? Quite simply because a clean energy economy has enormous potential to bring better health, new jobs, and economic opportunity to low-income communities and communities of color—provided some inclusionary practices are written into the very foundation of such an economy. The coalition helped strengthen the legislation so that it provides broader access to and more opportunity for all of America’s communities.

Clean Energy = Jobs
In September 2009, President Obama said, “I firmly believe that the nation that leads the clean-energy economy will be the nation that leads the global economy." According to a recent report from Green For All, Natural Resources Defense Council (NRDC), and the Political Economy Research Institute, a $150 billion investment in clean energy is projected to create 1.7 million jobs. That’s three times the number of jobs a similar investment in fossil fuels would produce! But what do these broad economic strokes mean locally? And how will low-income and communities of color benefit from them?

Two provisions that made it into the House bill at the eleventh hour because of the coalition’s efforts ensure that low-income communities and local workers will get training for and have access to quality jobs in the clean energy economy. They are, funding for the Green Jobs Act and the Green Construction Careers Demonstration Project. Both provisions are based on the successes of local efforts around the country to assure quality standards and hiring provisions to benefit low-income communities.

Quality jobs in construction—an industry that is central to the country’s transition to clean energy—have been declining for years. Low-income communities have seen enormous negative impacts from a lack of investment and job loss. To combat these trends, building trades unions and community-based organizations across the country are working together to make construction careers a reality for low-income people. This is no small challenge.

Real Workers Win Quality Jobs
To successfully target and employ low-income workers requires outreach and recruitment in low-income communities, orientations to the industry and the rigors of a job site, access to pre-apprenticeship training, and policies for publicly funded and subsidized construction projects that create demand for new workers. Across the country, local coalitions are working to pass such policies, and to create the recruitment and training programs needed to make them successful.

Project Labor Agreements (PLAs) provide an effective and proven tool for improving job quality in construction and giving low-income workers access to the jobs. At the Port of Oakland, for example, a PLA signed in 2001 outlined an ambitious set of goals for assigning work hours: 50 percent to residents of the local business area and 20 percent to apprentices from low-income communities surrounding the port. Ultimately, residents of targeted neighborhoods worked 31 percent of all construction hours associated with a modernization project that took almost nine years to complete and provided a significant number of low-income job seekers an entry into construction careers through the apprenticeship program.

Real workers see real benefits from such an approach. John Harriel is an electrician from Los Angeles who lived through some tough times—including a stint in prison—before finding a career through a union apprenticeship. He is now a home-owner who made about $100,000 in 2008. While the community labor agreements have been successfully implemented at a local and regional level, the Green Construction Careers Demonstration Project in the clean energy bill marks their introduction into federal law.

A Gateway to the Middle Class
The Green Construction Careers provision of ACES allows the Secretaries of Labor and Energy to target employment and training opportunities with high-road contractors in the building trades towards workers and communities that traditionally lack access to middle class type, career-track jobs. On large projects, the proposal allows enactment of community workforce agreements similar to the ones successfully negotiated in Los Angeles and at the Port of Oakland.

The second key provision in ACES—nearly $1 billion in funding for green jobs training under the Green Jobs Act—creates another necessary opportunity for workers from low-income communities to access jobs. This “pathway out of poverty” training is essential for people without high levels of formal education, who have suffered the worst effects of recession and pollution, to enter America’s clean energy workforce and find middle-class careers in the green economy.

Battle Ahead
Although the two provisions have been won in the House of Representatives, we are still a long way from seeing the bill signed into law. While the Senate fights over the clean energy legislation, it is up to us—the low-income communities and communities of color—to join forces and continue to lead the way for an inclusive clean energy economy.

Phaedra Ellis-Lamkins is chief executive officer of Green For All and Leslie Moody is executive director of Partnership for Working Families. Green For All is a national organization dedicated to improving the lives of all Americans through a clean-energy economy (www.greenforall.org). The Partnership for Working Families is dedicated to building power and reshaping the economy and urban environment for workers and communities (www.communitybenefits.org).