The frightening consequences of climate change are becoming increasingly familiar to Americans: rising sea levels, severe and unpredictable weather, frequent storms and droughts, and less reliable water supplies. Less familiar, perhaps, is the scale of the impact of climate change on poorer communities, typically located in environmentally sensitive areas, but with fewer resources to adapt to the changing conditions. If you can imagine a series of Hurricane Katrinas occurring in slow motion among poor communities across America, you get the picture. 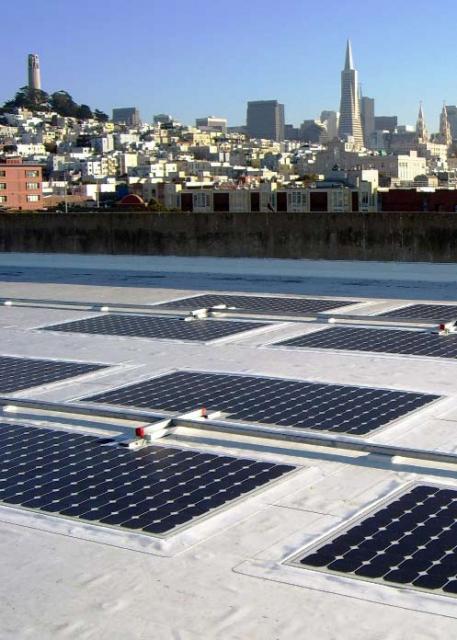 Consider, for example, San Francisco’s southeast sector, home to the Bayview and Hunter’s Point neighborhoods, as well as to the city’s largest waste treatment plant. Projections of probable sea level rise predict that entire portions of the sector may be underwater in the coming decades. When it happens, the poor infrastructure and substandard housing typical of the neighborhoods will have little chance of holding up against the expected flooding.

Such a nightmarish scenario is not meant to scare, but rather to drive home the point that environmental and social justice advocates have a clear stake in fighting climate change in American cities. The price of not engaging in the effort is simply too great.

Cities as First Responders
The story of urban leadership on the climate crisis begins amidst the lost years of the Bush administration, when mayors across the country united in action even as President Bush and his functionaries denied the existence of human-made climate change. In 2005, several hundred mayors signed the United States Mayor’s Climate Protection Agreement. Spearheaded by Seattle Mayor Greg Nickels, the Agreement committed signatory cities to reducing their greenhouse gas emissions to Kyoto Protocol levels—that is, seven percent below 1990 levels. To date, 997 cities are party to this agreement.

This public commitment from a wide range of United States cities to fight climate change—from New York City to Shishmaresh, Alaska—has spawned a series of actions and strategies to reduce greenhouse gas pollution: from the highly symbolic (placing solar panels on city halls) to the deeply fundamental (investing in public transportation).

San Francisco was an early leader in the movement, and the results of these efforts are both promising and instructive. In 2004, Mayor Gavin Newsom and the Board of Supervisors adopted an ambitious Climate Action Plan centered on reducing greenhouse gas pollution 20 percent below 1990 levels by the year 2012. No city, at that point, had set itself such an ambitious goal. The first part of the plan called for calculating San Francisco’s communitywide carbon footprint, followed by several active recommendations on how to reduce that footprint—from improving non-auto transportation options to making residential homes more energy efficient to finding “greener” ways to dispose of waste.

San Francisco Leads with its Heart
San Francisco’s Climate Action Plan also helped envigorate efforts started by Mayor Willie Brown and continued in earnest by Mayor Newsom, to pursue environmental justice in the city’s southeast sector by closing down two major fossil fuel burning power plants. In fact, many of the actions targeted in the plan—if realized—had the potential to improve the lives of the most vulnerable San Franciscans.

In the last five years, climate protection has framed some of the city’s most important environmental projects—such as, improvements to Muni, the city’s public transit system. Given that 54 percent of San Francisco’s emissions come from car use, getting more people out of their cars and onto Muni buses and rails (or riding bikes and walking) was seen as the single best way to tackle the problem. But first, city leaders recognized, they would need to make Muni transport reliable, quick, and safe and funding within Muni’s budget was reprioritized accordingly to focus on improving the system. If the city succeeds in achieving this goal, the result should be a more reliable transit system for those who depend on public transportation.

Building more housing within transit-rich San Francisco is another critical part of the Bay Area effort to accommodate future housing demand without increasing the regional carbon footprint through sprawl development. Mayor Newsom set a specific goal of developing 15,000 units in five years, which is well on its way to fulfillment. The challenge for San Francisco, however, is to keep the new housing affordable. Despite having the nation’s strongest inclusionary housing requirements, San Francisco residents continue to leave the city for more affordable housing.

Environmental progress in San Francisco, galvanized by its climate action plan, is undeniable. A recent update of the city’s carbon footprint revealed a six percent reduction in greenhouse gas emissions below 1990 levels—among the highest in urban America. The city has also achieved a 72 percent recycling and composting rate and the number of solar panels installed on residential and commercial rooftops each month has tripled. Other goals, such as efforts to shift commuters from autos to public transportation, remain works in progress.

Social Justice and a Plan for Adaptation
San Francisco’s 2004 Climate Action Plan broke new ground with its vision of what a city could do to combat global climate change. It also helped San Francisco advance some key goals of environmental and social justice: equitable transportation options; decreased energy costs for residents; and lessened auto emissions. However, what is less clear from the plan is the specific impact the new policies will have on the city’s most vulnerable residents.

Since San Francisco did it, there’s been a wholesale evolution of climate planning in American cities to specifically prioritize environmental and social justice benefits from climate action. New plans across the country focus on creating green collar jobs for citizens excluded from the traditional economy, prioritize energy projects that help low-income residents, and seek to ensure the active inclusion of community groups in urban climate planning. The city of Oakland recently adopted such a plan and San Francisco is in the process of updating its climate goals in partnership with community groups.

In recent years, there has also been a movement in San Francisco and other cities toward “adaptation planning,” in recognition of the fact that even if we are successful in reducing emissions now and in the future, certain irreversible but significant impacts from the climate change already underway are inevitable. The goal of adaptation planning is to ensure that we make long-term decisions now to avoid the more pernicious impacts on our vulnerable communities.

Wade Crowfoot is the west coast political director of the Environmental Defense Fund. He most recently served as director of climate protection initiatives for the city and county of San Francisco and is now a member of the board of directors of Urban Habitat.


To order the print edition of "Climate Change: Catalyst or Catastrophe?" use the back issues page. To download or view a pdf of this article use the link in the lower left below.