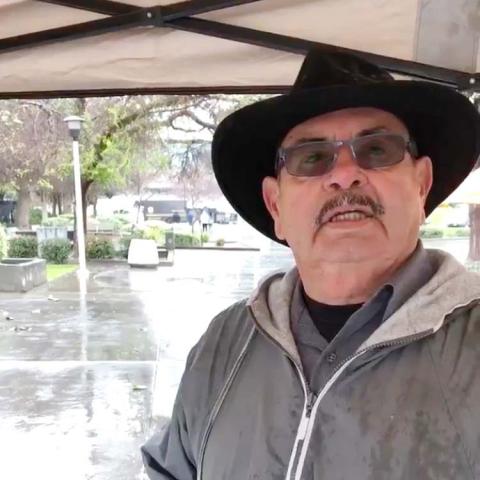 As the online retail market continues to expand, massive warehouse and distribution facilities are being plopped down in communities already overburdened by hazardous wastes, industrial and agricultural pollution. In Fresno California the city council recently permitted three million square feet of construction in what the California EPA measures as the most environmentally burdened census tract in California. Neighbors weren’t notified about the project until construction had already begun. Jess Clarke sat down with a local resident, and an attorney advocate who have been battling this new pollution source in their community.

Jess Clarke: First off, it’d be great if you could introduce yourself and just tell me a little bit about how you came to be in Fresno and what it’s been like living there all these decades.

Leo Martinez Macias: Sure. My name is Leo Martinez Macias, and I originally came to Fresno in 1960. I purchased a home there in 1967 on 1443 East Central Avenue, trying to live out on the country where I'd like to raise my family in a safe, rural environment because I'm used to living out in the country.

But over the years all varieties of industrial plants and hazardous waste facilities sprung up, bringing toxic air pollution, constant truck traffic, and contaminating our water. We were never consulted or asked before these facilities appeared and started to impact our quality of life.  Now, our community ranks in the 100th percentile for pollution burden according to the California EPA.

So we are already in in a tough situation. Recently, all of a sudden, all this construction started going up on Central Avenue and Cedar Avenue and all around the community. There were several different big factories going up and very little input from the community. There was no way of knowing what it was all about. The city did not actually want to communicate with us to let us know what was going to happen with all this construction.  One big concern is they’ve taken all water supply by building big wells for all the new construction. Our wells are going dry, ours is on the brink of going dry and we’ve got no water or sewer connection.

Clarke: If you want to share this,  can you give us a little sense of what the stakes are for people who are exposed to these toxins?

Macias:  Yes, it’s very concerning. I’ve seen a lot of it my family. Two of my family members have developed cancer, I have cancer, asthma and a lot of other respiratory problems. My neighbors right next door to me passed away due to cancer, and another two neighbors on the other side. Yeah, this is very hard for us because we’re dealing with a lot of [contamination] in the air, in the water, in the soil, everything.

Now the dust from construction is choking us and triggering our asthma. We are told that more than thousands of trucks will pass by our homes everyday. But we have not yet heard what will be done to protect air quality, or ensure that kids can walk and bike safely.

Clarke: Ashley, I imagine you have some background on that.

Ashley Werner:  Yes. It’s worth noting that this neighborhood has been identified under CalEnviroScreen as the most pollution burdened census tract in California. That’s because, in addition to the new facilities the city is permitting, this area also has several hazardous waste sites, a landfill...and farming that uses hazardous pesticides. So there’s a whole range of facilities that are really impacting them and then contributing to these poor health outcomes that Leo and his family and his neighbors are experiencing.

Clarke: Worst in California. That's a tough honor to bear.

Werner: It is. It’s just kind of amazing to me how that's such a significant fact, and yet it doesn’t really carry weight in Fresno. That's an example of why we can’t afford to just leave it to the locals if they’re not going to do anything. We really need the state to step and say, you know, we’ve developed a tool, CalEnviroScreen, to identify communities being overburdened. Now, we need to take the next step to make sure that they’re allowed to be engaged in these processes that are creating these outcomes of disproportionate burdens.

Clarke: So they don't give you any notice, and they don't tell you what they’re building? And they don't want to hear about it when you do find out? That's the basic sense of it.

Macias: They made applications with no restrictions on the warehouses. They want to build with no input from the community. When we talked to the city council. They ignored us and laughed at us. They didn’t seem to care about the community. We weren’t able to communicate with him. When we do find out they basically ignore us and keep on constructing whatever they want.”

When we had a meeting and we asked about them building a four-lane on Central Avenue they said they didn’t have the money to do so. Just a lot of little things that were showing that they were not interested in caring about the area.

Clarke: So what you’re asking for, in terms of getting some new legislation on the state level…want to sum that up in your own words in terms of what kind of notice you feel your community should be receiving?

Macias:  Well, I am really impressed with the AB-2447 legislation to make sure that people get notice and are aware of what’s going on in their communities and that somebody is letting them know about the hazards and all the things that go with building a safe community, that the environment is protected from pollution and so forth. To me, it’s very important for a safe community, where they do the necessary studies and everything to make sure that the pollution just doesn’t go to one area and pollute all of a certain part of Fresno or the community. You know, any concern about whether they’re polluting more than it should be or just making sure that the laws are being followed by the city planning commission and the city council.

We deserve to know what will be built in our neighborhood and how it will affect us.

Leo Martinez Macias is a longtime resident of Fresno, California where he volunteers with the Leadership Counsel for Justice and Accountability where Ashley Werner is the Senior Attorney.