Shifting Power From the Inside Out 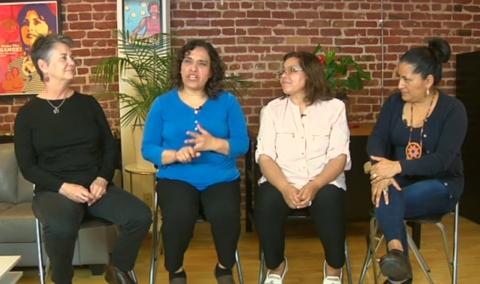 The following conversation is an excerpt from a video produced by RoadMap Consulting and Mujeres Unidas y Activas (MUA). Since 2014 MUA has worked with consultants from RoadMap to design and implement a capacity-building program called Futuro Fuerte (A Strong Future). The program strengthens leadership professional development and internal practices so that MUA can become an organization successfully led by its Latina immigrant women members. Over the course of several years, 16 immigrant women members took on paid staff positions and occupied key decision-making roles in the organization. MUA’s process shows ways that movement organizations can tackle internalized racism and structural barriers to change. The results are documented in the RoadMap published report Shifting Power from the Inside Out.

Ana Perez: Why have you come to center leadership of the immigrant women in MUA?

Juana Flores: I believe three things. If a woman does not support herself to be sure of herself,  if a woman of the base is not developed to take an internal role in the organization, then the woman will not be prepared to have an external political role. When a woman form the grassroots is truly at the table her voice will be heard. It is the immigrant woman who has the experience. There is a need for the leadership to come from the bottom up, and not from the top down.

Ana Perez: Many organization in the movement have good membership numbers. They go out and recruit them and involve them and build leadership, but when it come to major decisions, the strategic positions, are not occupied by people from the base. You Know? People like me, educated in the United States, or white people, not the base, are brought in and take too much power, take the most important positions and control the strategic direction of the organization. Although it is in collaboration with the members, it is different. What we see at the national level is that those are the same people who are speaking for the immigrants, for the woman are from the membership and not for the women themselves.

Ana could you tells us about a tool that you thought about when you started working with us? In Futuro Fuerte you said “This is what Mujeres Unidas y Activas needs”

Ana: Systems of power impact us on a personal level and they take away our trust and make us doubt ourselves. When I was able to share the tool of how to overcome internalized oppression, I gave a new language to all the women on staff who began as members and they were able to say, “Oh I’m clipping my own wings,” right? or “You are enabling me.” (Rescuing me in a dysfunctional way.) I think it helped to change the women’s narrative and it gave them strength. I feel that this too is what helped transform how they felt. Therefore they could have more confidence in themselves to be able to speak, to be able to disagree, to be able to say what they felt.

Lulu: What Futuro Fuerte can achieve and has achieved in organizations is a deep change from within, even if it hurts, right? Although that change can hurt us. Although this step hurts so much, it is a step that we have to take to cleanse and heal, to heal ourselves, at be a guide for other organizations as well.

Emily: We identified that one has to be able to give and receive feedback. One tool is how to show up for courageous and difficult conversations. We had another one about guidelines and agreements for meetings to ensure that in each meeting everyone agrees, that in this space we are going to talk honestly. We are going to listen well

Lulu: They gave Erica and I the roles of Wellness Coordinators (Coordinara de Bienstar) We are sharing and keep refreshing these tools These tools are not going to be put in a folder and put away in a desk, but we continue engaging. We revisit them, each meeting, although it times it can be difficult, because we get so caught up in being busy all the time. It is a bit difficult at times to make the time to continue implementing and practicing these tools. A little bit about the tool “El Pozo” (hole or mud pit), what we learned is that everyone will feel badly when something goes wrong, right? So the first reaction as a human being is to start blaming ourselves, to start saying that we were to blame, or that someone else did this or that, and “That’s why I am here.” And then we begin to sink deeper in the mud pit, because we are already in that pozo. So what we have learned is how to get out of that pozo by asking, “Why am I here, Why am I feeling this way?”

Ask yourself questions. “How did I get here? And now, what things can I do to start getting out of here?” because it’s not good to feel that way. It does not feel nice to be there in the pozo.

That grassroots Latina immigrant women are leading. And that we don’t just give her a title but that she really is fulfilling the responsibilities of the position. We have power, we have strength, our rights as women, as workers, as immigrants, as domestic workers, we have strength and we also have the strength to make the change. We have the courage to make the change.  Something that I really like that is happening in the organization is that not only the grassroots woman is taking leadership in being for example, a supervisor. She is not only supervising other women from the base. No right now, women who came from the membership are supervising women who are not from the membership base. By this I mean that Futuro Fuerte is transforming the organization. Futuro Fuerte is creating a program that other organizations must implement.

Ana: People of color are 10% of all the leaders of non-profit organization sin the movement. I come with a university education from here. I speak English. So for a woman like you Juanita, a woman from the base who is learning to speak English, you are very rare in the leadership of the movements of this country. In reality there are thousand and thousands of Juanitas in this country, because there are thousands and thousands of immigrant women who might be playing leadership roles but they do not, because of racism, xenophobia, or classism, right?

Because they have to be educated in the university to be the leaders of the organizations, many of the job descriptions include this. So what we are doing is limiting the potential of immigrant women from the base. Imagine if we had thousands of Juanitas what would the immigrant rights movement be like now? What new strategies might be emerging? We need to be very aware that if we do not have people from the base at the forefront then we are not achieving our mission. We are simply replicating the same systems of oppression.  Therefore, organizations such as Mujeres Unidas y Activas must receive the support of the entire system so that they con continue to develop the leaders we need at the head of our movements.

Really the capacity is there, but there is a lack of development, investment, conscientization. If we don’t have this, yes there can be internal local movements but we will not get where need to go at the state national and international levels where the women from the grassroots base can be the ones creating the vision, the strategy, making the decisions at the tables where this work is done. Not only in the immigrant rights movement, bout women’s rights, in the right to live free of violence, the right to our own bodies, the right to everything we have and have had taken from us. n

For more information visit: www.Mujeresunidas.net/futurofuerte or www.roadmapconsulting.org/resources/shifting-power-from-the-inside-out. Juana Flores is the Executive Director of MUA, Maria de Lourdes (Lulu) Reboyoso is the Grassroots Fundraising Coordinator of MUA. Emily Goldfarb is the former director of RoadMap and Ana Pérez is a RoadMap consultant.