I Am San Francisco: Black Past and Presence 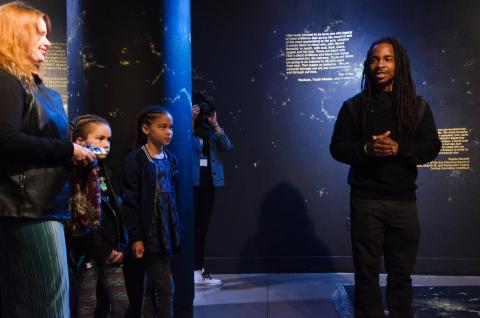 “When we say black, what does that mean?”

Phillips chose his favorite quotes from all the conversations and scattered them across the gallery’s long, curved wall. The gold lettering stood out against the black background, with gold dust resembling nebulas and galaxies strewn around the quotes.

Phillips said he got the idea for this layout from his Christian upbringing. He said although he no longer has any religious affiliation, he’s fond of the ideology of a heaven-like realm being the birthplace of everything around us. He likened it to Creationism, with his chosen quotes sparking new ideas and discussions, the way god’s words created the world.

“The idea of space,” Phillips said. “Where from that infinite nothingness, everything becomes.”

Phillips also got a musical performance for the opening reception of the exhibit. Edward Jackson, a member of Urban Funk Machine and longtime favorite of Phillips’, performed a tap dance routine to Bruno Mars’ “That’s What I Like” and showcased his iPad and Intel-driven music production technology. He said he was interested in being part of Phillips’ creation almost immediately.

“I said to myself, ‘That young man is so heavy,’” Jackson said upon his first conversation with Phillips. “What we talked about had to do with god, art, the ancestors. I want to pay homage to Jarrel, because I normally don’t come out [for events]. But this has been such an honor and privilege to support the community here.”

Phillips mentioned that a young girl who had originally agreed to participate in the exhibit later declined, stating that she couldn’t think of anything positive to say about being black. Phillips said he fully understands what “Black Lives Matter” means, but he knows that there are some people who simply don’t, which could even be a black child.

“How do we magnify that significance that is there but sometimes overlooked?” Phillips said. “How are you mindful of just saying, ‘There are no black people.’ Say that to the black person at this exhibition who needs to see black people. It’s important that we create the narratives as much as the narratives create us.”

Editor's Note: I Am San Francisco: Black Past & Presence (IAMSF) explores social and cultural values and concerns through the depth and diversity prevalent within Black life and culture in San Francisco. From past to present, IAMSF honors Black existence, voice and insight that transcend, both, time and place.

This project captures the depth, beauty, complexities, and abundance prevalent within ‘Black life,’—culturally, communally, and individually—through the personal reflections of its contributors.

Premiering at City College of San Francisco in April 2016 – November 2016, then at SF State University in 2017, it is the second installment of two multi-media art exhibitions themed “I Am San Francisco.” It will unfold with a short film, a print version, and a culminating event, a collaboration between Reimagine! — a grassroots cooperative of writers, editors, artists and designers based in Oakland and AVE. AVE is dedicated to youth and community by integrating meaningful experiences through play, work, art and learning.

This interview and the excerpts that follow are portions of an on-going project called I Am San Francisco: Black Past & Presence (IAMSF). Created and curated by Jarrel Phillips, IAMSF was presented as an art exhibition at City College of San Francisco’s Rosenberg Library. The purpose of IAMSF is to recognize the depth, beauty, complexity and abundance prevalent within ‘Black Life’ in San Francisco—culturally, communally and individually.

The stories we tell showcase what humanity’s all about because we are a part of humanity.
—Thomas Simpson, AfroSolo Theater Company, Founder and Artistic Director

IAMSF was first featured at City College of San Francisco in 2016 and is an ongoing project in collaboration with Kheven LaGrone and Reimagine! RP&E, the national journal for social and environmental justice.

Tweet
‹ Until the Streets of the Hood Flood with Green up Dr. Andrew Jolivette ›