Interview with Marie Romero, founder and owner of Arkipelago Books, the only Filipino Bookstore in San Francisco, with a foreword by Beatriz Datangel, her daughter. 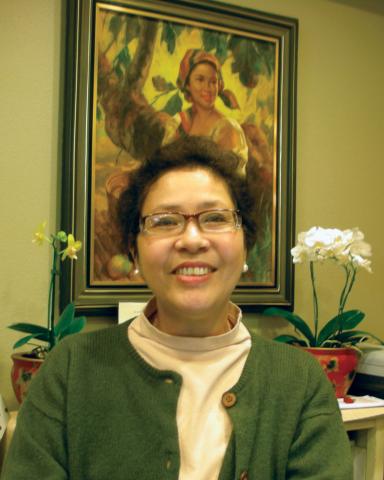 Arkipelago Books has thrived in San Francisco’s SoMA district for over 20 years. It has a wide selection of readings, from fiction and nonfiction, to poetry and children’s books, as well as historical text from a wide variety of Filipino and Filipino American authors. There used to be a larger population of Filipinos in San Francisco. In the 1960s, San Francisco was home to a vibrant Manilatown, which stretched almost 10 blocks along Kearny Street near Chinatown. Then, Filipino businesses and residents were forced out after the expansion of the Financial District in the late 1960s. And in 1977, many Filipino tenants faced eviction from the International Hotel. In the aftermath, some businesses and residents left the city altogether, while others migrated to the South of Market, filling the residential hotels and small apartment buildings along the district’s many alleyways. In 2017, the struggle for cultural communities to hold space in San Francisco continues.

Foreword: Beatriz Datangel on Marie Romero
When I was a kid, I remember always coming to the bookstore [Arkipelago] and reading. My mom couldn’t find a babysitter, so my brother and I just sat around and read a lot. Some of my favorite books in general are reading the bilingual children’s books with colloquial sayings in English and Tagalog and looking at the illustrations. The stories remind you to be playful. They teach the real deep enchanting mysticism of the Philippines.

My mother wanted to raise us to be proud of who we are. A lot of folks that are my age or my brother’s age, their parents were so ashamed of being Filipino. They didn’t want to teach Tagalog or their native dialect. They wanted you to “enjoy being American,” because we immigrated here.

My parents immigrated here, too, and they wanted to teach us about Filipino and Filipino American accomplishments. But that wasn’t common knowledge and it wasn’t easily accessible. You just didn’t see it. You hear about Ceasar Chavez, but don’t hear about anyone else in the farm movement; or you learned about the history of interracial marriage between Blacks and whites, but not about other interracial relationships.

Most of the books we sell are from the Philippines. In the last 15 years there’s been a resurgence of people who want to preserve [their] history and document their own stories. In the young fiction collection, a lot of writers have been documenting their families; their lolas (grandmothers) and their struggles—listening to our grandparents speak only Tagalog, trying to translate their stories into English. Everyone’s family has struggled to be who they are now. It’s a mix of things from the Philippines but also folks like me who are first generation, and so forth.

My mother instilled in me, as a young woman, pure respect and appreciation for a female-owned store in San Francisco, where it is a highly competitive market. She was a single mom with health issues, yet remained steadfast in owning and maintaining a store. You think a hard life, first world problem is “Oh, I missed my meeting,” or “I can’t miss my deadline.” But what she does is real work, day-in, day-out. It has always been about community loyalty, belonging and empowerment.

Interview with Marie Romero
Christine Joy Ferrer: What made you want to open a Filipino bookstore in San Francisco?

Marie Romero: Twenty-something years ago you couldn’t find any reading materials geared to Filipinos or Filipino Americans, especially for the young ones. You’d go to libraries and, nothing. Or if you did find something, its pages were falling apart. In the early ‘90s, I started collecting books for my children. My daughter Beatriz was barely walking. I wanted to read her bedtime stories. Because I couldn’t find any books, I traveled back and forth to the Philippines, finding books, buying books, then I started sharing my books with friends back here in America. Then it was the funniest thing because my friends started arguing over the books, about who was going to borrow what.

But, this gave me an idea to start a mail order and book publishing business. Word spread about our first location on 6th street between Bryant and Harrison. When more and more locals started visiting us, my husband and I expanded our office into a show room. But then we divorced, and I carried on the business by physically having a bookstore. My ex-husband was more into publishing. I moved the bookstore to the Mint Mall on Mission and lasted there for [about] 10 years. And now, I’ve been at the Bayanihan Community Center since 2006.

Ferrer: The Mint Mall in the late ‘90s early 2000s was one of the last Filipino community spaces in the city. And a decade before that, the combination retail and low-income housing building, was home to about a dozen Filipino businesses and organizations. Then evictions reduced the number of Filipino businesses to a handful. Did you fear displacement?

Romero: I was a lucky one. I actually was one of the few businesses to have a long-term lease. There were about eight of us Philippine-owned businesses then [but] most didn’t have leases. And if we did have a lease, we still worried that the owner of the building would shut us down. Conditions were also very poor. Water leaked from the ceiling, walls and floors. The insurance companies didn’t even want to insure us anymore. The dot-com boom threatened everyone.

But, our communities rallied behind us. Rain or shine at City Hall, I remember hundreds of people coming out to support us. Many of my customers attended the rallies —librarians, locals, other community organizations—it was just such an overwhelming support from so many. We really appreciated it. And from that paved the way for Pistahan [The annual Pistahan Parade and Festival is a celebration of Filipino culture and cuisine. It’s deemed the largest celebration of Filipino Americans in the U.S. organized by the Filipino American Arts Exposition] and SoMA Pilipinas [San Francisco’s newly established Filipino cultural and heritage district that honors the rich history and legacy of the filipino community in SoMA].

But eventually everyone vanished. And then it was just me as the forefront tenant until the Bayanihan Community Center invited me to join their space. I have never felt unwanted. 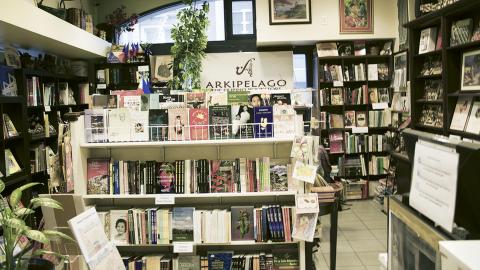 Ferrer: What is like being a Filipina business owner in San Francisco?  What has sustained you?

Romero: It’s all about trial and error. I got divorced, was awarded the retail side of the businesses and did the best I [could] with two kids. It’s survival that teaches you. The bookstore has been my fulltime job for the last 20-something years. Libraries all over the world support my business—Norway, Russia, countries in Africa—I didn’t even know there are Filipinos in Russia. I focus solely on Philippine literature. I must admit, I don’t get walk-in traffic as much, but a lot of institutional orders. Local Filipino community organizations and teachers from San Francisco State University and City College send their students here.

I could write a book about the experiences I’ve had. I love what I do. Every day I look forward to coming to the bookstore. I’m excited every time a book arrives in the mail. I get to read it. I scan it so I share it with my costumers in case they are looking for something of that particular topic. I used to travel everywhere to sell my books. We get invited to San Jose, New Jersey, New York... but it requires a lot of marketing and I no longer have the time or energy. I hope one day someone will carry on its legacy. If I win the lotto, there would be more Arkipelago bookstores.

Ferrer: Can you tell me a little bit about your immigrant story?

Romero: I am under 60 years old. I’m from Baguio City in the Philippines and came to America at age 16 or 17. My dad was a bank officer in the Philippines who traveled for work. Dad first got sent to New Orleans. Immigration was really easy then. So the rest of my family followed. My dad would travel back to the Philippines every six months. It was such a long journey from Louisiana to Texas and then from California to the Philippines. So when my mother got sick, our family decided to settle in California.

I graduated from San Francisco State University in 1981 or ‘82 and majored in business  and accounting/hotel and restaurant management. I also went to culinary school at City College of San Francisco (CCSF). There were so many Filipinos at CCSF during that time.

After I married and had children, I decided to raise my kids in San Mateo, but I picked San Francisco to open my business because it’s an international city. It was so welcoming when I first came. I have always loved the Golden Gate Bridge, the fog and San Francisco food is so good.

Ferrer: What is one of the most memorable events you’ve had at Arkipelago Books?

Romero: It was the book launching of Memories of Philippine Kitchens by Amy Besa and Romy Dorotan. [The book is] filled with food stories and documents the role of Filipino food in society. The hallways at the Bayanihan community center were transformed into a mini house with a cooking demo. We had three [multi-generational] speakers: one talked about cooking for the dead; a little boy, about 10 years old, told everyone about his grandmother’s delicious cooking; and someone else spoke about Filipino food in the 1920s and ‘30s. We sold almost 500 copies. People were so homesick.

And that’s what the bookstore is. It allows people to remember. While others just want to learn more about their culture.

When I first opened the bookstore, I remember this student who would come in regularly to buy books. Then she disappeared and after a few years she came back with two children in tow. “I haven’t been around because I had two kids and have been so busy,” she told me. Her kids are now eight and 10 [and] she’s collecting children’s books. It all comes full circle.

Ferrer: Why is it so important for a bookstore like this to exist; a cultural space that allows the knowledge of Philippine ancestry, culture and history to be passed on?

Romero: Our identity has been covered up politically for so long, but we are here to stay. A good percentage of Arkipelago books are from the Philippines. And U.S. publishers are increasingly accepting manuscripts about Philippine culture and life—on becoming Filipino and Mexican; being of interracial decent; other ideas that were normally taboo. Publishers like University Press simply can’t turn [us] down.

When I first started the business, I remember going to BookExpo America in New York City. They discriminated against me and didn’t take me seriously as a Filipino publisher and for being a woman from the Philippines. Here I was, braving my way to New York and bringing my books, showing people that we do have such a thing as literary and scholarly materials. I felt like [saying] “Yes, we draw well, we write well and we have wonderful messages in our content, even if our overall packaging isn’t up to your standards!” No one can deny our presence anymore.