Relentless organizing by labor, students, and community members won San Francisco the most inclusive free community college plan in the country. Yet the program approved by the City College of San Francisco (CCSF) Board of Trustees on Feb. 9, 2017 fell short of proponents’ goals. Assistance for students who already get state tuition waivers will be much more limited than originally planned, and many undocumented students will get no help at all.

Approval of the free tuiti 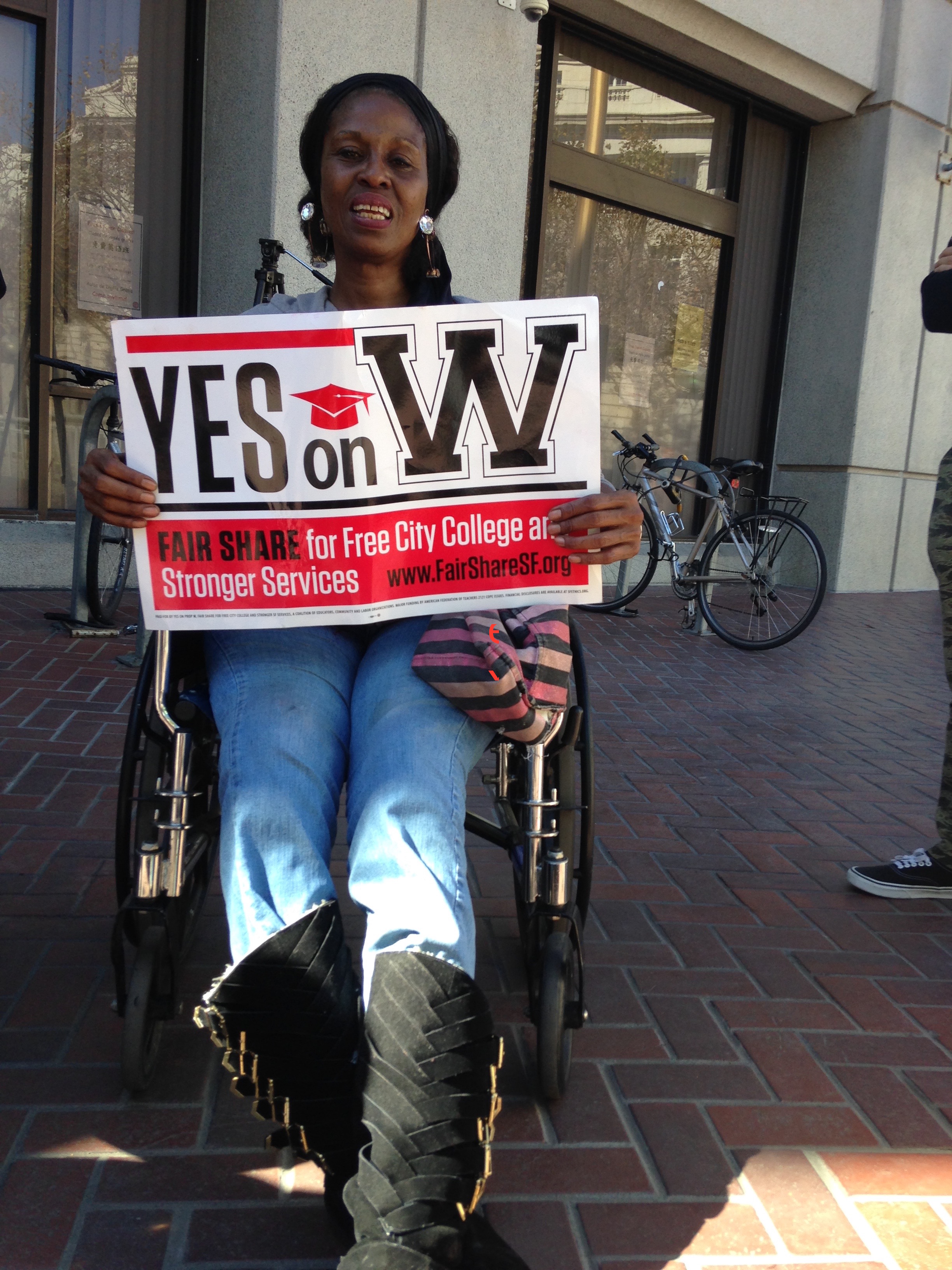 on plan came just weeks after City College learned that it would be fully accredited for the next seven years. The Accrediting Commission for Community and Junior Colleges announced its decision Jan. 13, after putting the school through a four-and-a-half year ordeal that bled it of students, faculty, and classes. (See “School ‘Reform’ and Land Grabs Threaten SF’s Community College,” RP&E Vol. 21-1)

“Nothing could be better for City College than to turn the final pages of the accreditation crisis into a victory that looks like this. This is a victory for public education,” says Alisa Messer, a CCSF English teacher and political director for American Federation of Teachers (AFT) Local 2121, which represents City College faculty.

AFT2121 launched the “Free City” initiative in 2016 as a way of galvanizing support for the school, and enlisted San Francisco Supervisor Jane Kim to champion it at the Board of Supervisors. The Board voted 10-1 to put the tax that would fund Free City on the November 2016 ballot—a tax on the purchase or sale of real estate worth more than $5 million.

Local 2121 anchored the campaign for the “mansion tax,” Proposition W, working closely with student organizers. The San Francisco Labor Council, along with community groups such as Jobs With Justice, Young Workers United, and Community Housing Partnership, turned out members to rally and canvass, as did progressive local candidates. On Nov. 8, almost 62 percent of San Francisco voters approved the measure. (It was a good election for City College all around. The extension of the parcel tax to support instruction at the school passed with 83 percent of the vote, the biggest “yes” for anything on the ballot, and two strong advocates for rebuilding the school, Shanell Williams and Tom Temprano, won election to the Board of Trustees.)

But San Francisco Mayor Ed Lee used the election results as an excuse to refuse to fund Free City, defying the voters and the supervisors. His office cited the defeat of a local sales tax that would’ve funded transit improvements and services for homeless people, and the fear that the city would lose federal dollars because it is a sanctuary city.[1]

Technically Mayor Lee had the right to shift budget priorities. San Francisco’s charter gives the mayor lots of power, including discretion over spending, and Prop W was put on the ballot as an unrestricted tax so it would only need a simple majority to pass. (Taxes for restricted purposes, like the parcel tax, need a two-thirds vote.) But all the discussion of Prop W linked it to Free City, as did the supervisors’ votes and posters all over town.

“A promise is a promise,” Supervisor Aaron Peskin said at the Dec. 15 board meeting. “Ten of 11 members of this Board voted to prioritize City College with Prop W, and it was all there in the campaign,” he said.

Lee’s stance reflected his history and priorities. “The battle over Free City and the revenue measure is example of the mayor’s lack of leadership in saving this institution that is so very important, especially for San Francisco’s low income and immigrant communities,” says former supervisor Eric Mar. “It’s consistent with his not being there for City College during the crisis,” says Mar, who represented the city’s Richmond district until he was termed out at the end of 2016.

Free City backers began a determined effort to push the mayor to do the right thing.  The supervisors took two more votes in favor of a $9 million appropriation for the project and the Democratic County Central Committee passed a resolution supporting it.

“We hoped by building enough public pressure we could encourage Mayor Lee to avoid the embarrassment of going against the will of the voters who passed Prop W to fund Free City,” says Local 2121’s community organizer, Athena Waid. On Jan. 6, Supervisor Kim stood next to the mayor as they announced an agreement that the city would use $5.4 million of the mansion tax revenues to fund Free City. The news went viral, with Lee claiming his share of the credit for the project he tried to scuttle. "To California residents who are living in San Francisco, your community college is now free," Lee said at the news conference.

San Francisco’s program is far more inclusive than other free community college plans. Free City is available to all residents of SF who qualify for in-state tuition at CCSF, no matter their age or educational path. It isn’t restricted to students who enroll in specific majors, attend full time or make good grades. Students who receive tuition support through the state Community College Board of Governors’ fee waiver program will get a stipend they can use for books and other costs, such as transportation to and from school.

But the $5.4 million the mayor agreed to spend is just a little over half the amount appropriated by the Board of Supervisors, and is only 12 percent of the $44 million[2] the San Francisco Controller’s office estimated the tax will net in an average year. This cut means the stipends will only run about $500 per year instead of the $1,000 Prop W backers originally hoped. And the majority of undocumented students, who pay out-of-state tuition, will not be eligible at all. 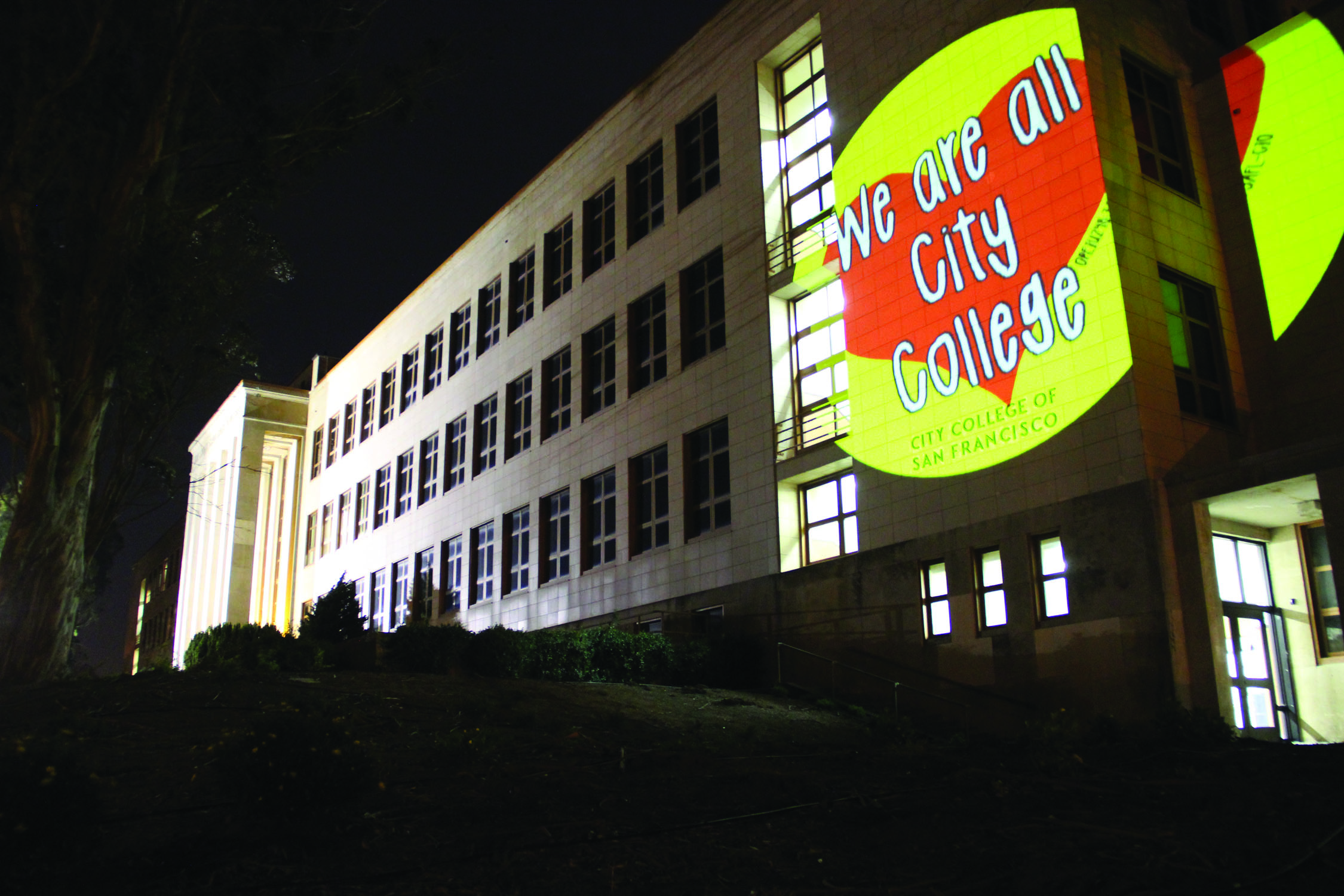 The plan agreed on by the mayor and Supervisor Kim will only cover college-credit courses for undocumented students who fall under AB540 and Deferred Action for Childhood Arrivals (DACA); non-credit courses such as beginning English will continue to be free to all.  AB540 is a state law that allows students, regardless of immigration status, to pay in-state tuition at all of California’s public community colleges and universities. To be eligible, they must have graduated from high school in California after attending for at least three years, and meet other criteria. DACA is an Obama-era policy that allows eligible undocumented residents to work in the US legally for two years.

Non-AB540 students were excluded by replacing the words “San Francisco resident” with “California resident” in the agreement, and excluding part-time workers. San Francisco issues an ID card to all residents, but students holding the card might not meet state residency requirements. If they didn’t, the city would need to cover the much pricier out-of-state tuition fees, $280 per unit rather than the $46 per unit charged to California residents.[3]

“There is some proposed legislation that would extend AB 540 eligibility that we hope to help move,” says AFT’s Messer. “There are a lot of ways we could cover these students, and I think we can do it—and it’s going to take some additional work to get there in a way that is thoughtful and responsive to the times,” she says.

“The decision to exclude the San Francisco ID is politically motivated,” says Lalo Gonzalez, who was a student organizer at CCSF at the height of the accreditation crisis. “It would've conflicted with business interests that depend on immigrant labor (the underground economy) and the cost would be much higher for the City,” Gonzalez says.

Members of the CCSF students’ Solidarity Committee took the lead in protesting the exclusions at the Board of Trustees. “There is no liberation for some of us unless there is liberation for all of us,” said Solidarity Committee member J.J. Vivek Naryan. “If we are truly to be a sanctuary campus, we need to be committed to fighting to be sure this reaches all of our students.”

The Trustees passed a resolution directing the administration to secure funds for grants or scholarships to help the excluded students, and passed the Free City proposal amid much jubilation at their Feb. 9 meeting.

“People keep coming up to me and saying, ‘Is city college going to be free? I’m going to come back and take these classes,’” Trustee Shanell Williams said. But they may not find the classes they want. Williams and like-minded trustees are fighting alongside students and faculty against a program of deep class cuts set in motion by the current administration installed during the state takeover. City College has earned passing grades from the accreditors, and broad public support, but the fight against the policies of austerity continues.