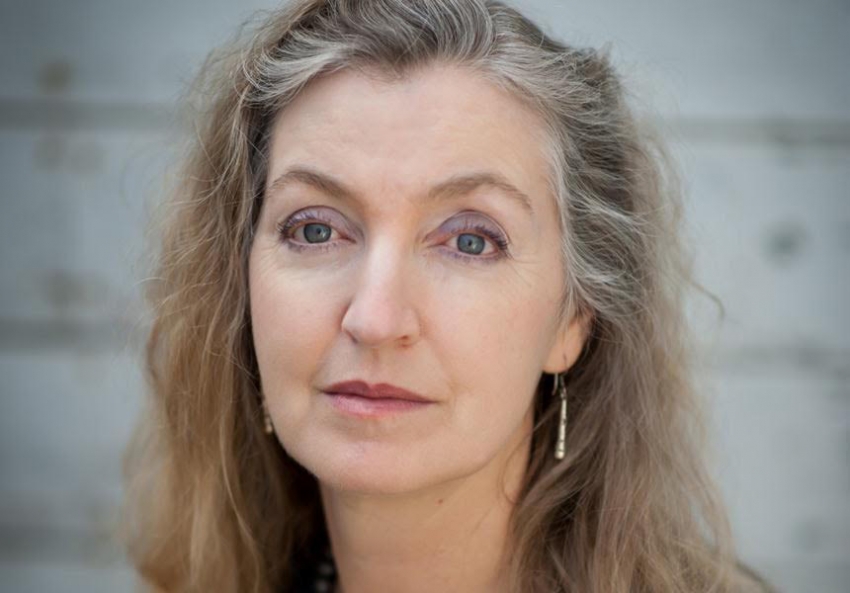 A sense of wonder can be a revolutionary tool.

In a dispatch from Paris for Harper’s, writer and activist Rebecca Solnit called the recent climate agreement negotiated there “miraculous and horrible.” This tension between the exciting and the awful, the transformative and the terrifying, motivates her book Hope in the Dark: Untold Histories, Wild Possibilities. Initially written in response to the Iraq War, the book will be re-released this month with a new section on climate change.

Solnit’s numerous books and essays cover a wide array of topics from environmentalism to feminism (famously, “Men Explain things to Me” helped inspire the concept of “mansplaining”). Her history of activism includes Nevada’s anti-nuclear testing movement in the 1980s and the protests around corporate globalization of the 1990s. Today we see another corporate trade deal—the Trans-Pacific Partnership (TPP)—on the table, American bombs falling across the Middle East and climate change accelerating.

This interview was originally published at In These TImes and is reprinted here as part of a collaboration sponsored by the indpependent media organization The Media Consortium.

What are your thoughts on the election?

The current hate-fest on the Left is just…kind of sad. The Left is famous for tearing itself apart. I’m not sure the purpose of that exercise. Hating on people has never been a great form of social change, so far as we know. I have preferences and they’re probably not that hard to guess. But with Obama, people so completely put their faith in: “Oh, we’ll elect this magic, amazing super-human and then we’ll all go home and do absolutely nothing.” The movement that put Obama in office was powerful enough to make really profound change, but everyone went home because they thought he’d do it.

That’s what you see with Bernie Sanders: this infatuation with an almost savior-like figure who will do it all. No, actually, massive grassroots movements need to exist the day after the election. Electoral politics are dismal; I’m more interested in grassroots power, popular power.

How has your activism influenced how you think about social change?

I’ve had a front-row seat in how change gets made, and I’ve seen that it’s often slow, indirect, unpredictable and sometimes incredibly wonderful. But I’ve also seen people who don’t perceive it if it’s not quick and direct. The incredible nuclear freeze movement in the early 1980s was driven by fear of Armageddon. I remember one guy being like, “I went to a rally and it didn’t change anything and I didn’t do anything more.” Really? You thought the Kremlin was going to fall to its knees because you went to an upstate New York rally? But the movement had tremendous power. When the Soviet Union collapsed there was this incredible moment where powerful movements could’ve pushed forward total disarmament, but there were no powerful movements. It’s sad.

Six years ago, the climate movement decided to stop the Keystone pipeline. As David Roberts at Vox has said, it was not just about changing one pipeline but changing the culture. Watching that process take place up close is boring. There were bad meetings and demonstrations that aren’t always triumphs.

But then you pull back and, oh my God, six years later, we defeated the northern stretch of the pipeline and we’re in a completely different place with the climate movement. A lot of people don’t have the long-term memory to see that—not that six years should even count as long-term. Also, hanging out with people who are passionate idealists and deeply devoted has made my life incredibly richer—this heroic sense of what it means to be a member of civil society, a person with a commitment that’s bigger than themself.

There’s this idea that political engagement is some sort of horrible, dutiful thing you do, like cleaning the toilet or taking out the garbage. But it can be the most fantastic thing you do. It can bring you into contact with hope, with joy, with a sense of deep connection, with what Martin Luther King called the “beloved community.” Disconnection from a larger sense of purpose and agency, from community and civil society, and from hope are huge factors in unhappiness.

How do you keep hope amid climate change?

It’s tough because we know terrible things are happening and are going to happen. Hope is that we can steer toward the best-case scenarios instead of the worst. Hope is not like saying, “Let’s pretend I don’t have cancer.” It’s saying, “Let’s hope this treatment has survivability. Let’s work for the best-case scenarios.” Things are changing fast. If you said three years ago that Congress was going to introduce a bill to prevent all fossil fuel extraction on public land, people would be like, “You’re out of your mind,” and that just happened. The science is changing, politics are changing, technology is changing, and we don’t actually know what they’re going to look like in three or 10 years.

The proposed solutions for climate change require large-scale state planning, but you’re very sympathetic to a local or anarchistic approach.

Paris was about nation-states, and they have a role. But at the same time, San Diego decided to go 100 percent fossil- free by 2035 and San Francisco finally implemented its clean-power program. Things are happening on a lot of scales.

We do need legislation and agreements. As Naomi Klein points out, one of the reasons the Republicans are furious about climate change is that it does require large-scale cooperation and regulation. But a lot of the systems are on smaller scales. My solar roof. Your transit alternative. Our statewide building code. New York’s fracking ban.

In Hope in the Dark you argue that the environmental movement should reach out and form alliances with rural communities.

It’s really funny talking just after Cliven Bundy got arrested and charged. He represents the far-right fringe of rural culture. A lot of what rural people who were suspicious of big government think isn’t that different from what radicals on the Left think, but right-wing outreach was awesome and left-wing outreach was somewhere between pathetic and nonexistent. How do you convince them that the world government they should fear is not the U.N., it’s the TPP? How do you get outside the stereotypes where people assume, “Oh, I have nothing in common with feminists or labor organizers”? We have a lot of divides that are artificial or not carefully examined. People on both the Right and Left are operating with a lot of stereotypes about each other.

What do you think of the argument that we need more women and people of color in power?

In a culture dominated by white men, often people succeed through allegiance to that white, male worldview, to those priorities. Thus: Margaret Thatcher, Clarence Thomas and so forth. I am not sure we will see what might be different about non-white and non-male governance until it’s more than a minority in a white-male system. I loved it that Ruth Bader Ginsburg, when asked, “Do you think there should be more women on the Supreme Court?” said there should be nine.

It’s important not to be prescriptive and say all writing has to have a political or practical end. Something I recall often is Lawrence Weschler’s Vermeer in Bosnia, about a human rights tribunal judge dealing with Bosnian war criminals. Weschler asks how he can bear to listen to stories of horrific atrocities day after day. The judge pauses for a moment and then his face brightens and he says, “After work I go to the museum and I go to the Vermeers.” That’s the best and most succinct description of how beauty, pleasure and joy help people do really difficult things. They often get dismissed as not part of the revolution. But I do believe that writing has and does and can change the world in direct ways, too.

You write a lot about walking, and about past writers like Thoreau and Woolf walking. Do you walk a lot?

Yes. Part of the solution to climate change is that we don’t need to rush around, we don’t need to consume as much, we don’t need to move around as much, because what’s up close can be pretty magnificent. I’ve been in San Francisco since 1980 and I still discover things all the time. A sense of wonder can be a revolutionary tool.

Dayton Martindale is a contributing writer for Rural America In These Times. He studied astrophysical sciences at Princeton University, where he wrote and edited for the student alternative paper The Nassau Weekly and student film/TV blog The Princeton Buffer. He tweets at @DaytonRMartind.