“The forces that stand to gain from the downsizing of City College are the San Francisco real estate developers, the student loan industry, the for-profit schools that our students will go to and take on horrendous debt, because they’re so expensive, and our administrators who are paying themselves inflated salaries,” says Wendy Kaufmyn, an engineering professor and Save City College activist. 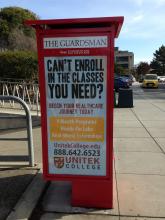 The for-profit sector has a strong presence in the US Department of Education, with key officials cycling through the revolving door to take lucrative positions with for-profit colleges and their lobbyists.3

Corporate philanthropy, another major instigator of education “reform,” played its part in the City College story. Lumina Foundation, a major funder of corporate education reform, was started with $770 million dollars from the nation’s largest student loan company, the Student Loan Marketing Corporation (“Sallie Mae”), and the current chair of its board is Sallie Mae’s former CEO. Lumina gave $200,000 to the Student Success Task Force, and $450,000 to ACCJC. The foundation then gave a lucrative state-level post to the director of the Student Success Task Force, Amy Supinger, who wrote the restrictive new regulations that create pressures on students to go to school full-time. This generally means they cannot work their way through college but must take out student loans.

Major players in the California Democratic Party have ties to the for-profit education world, and to the real estate industry that feeds off the epidemic of displacement. Party Chair John Burton was on the board of trustees for the University of Phoenix, and that for-profit is now in the process of being transferred to new management under the second highest-ranking official in Obama’s Department of Education from 2009-13.4 California Governor Jerry Brown is a major booster of charter schools. During his years as mayor of Oakland, he raised funds for two charters, and helped bring about the state takeover of the Oakland Unified School District; some 20 charters mushroomed in Oakland during the six years of the takeover.5,6

Richard Blum, husband of US Senator Dianne Feinstein, has been a major shareholder in Career Education Corporation and ITT Educational Services, two of the largest for-profit college operators. Both companies have been investigated and sued for their business practices—including, in ITT’s case, predatory lending.7 Blum also served for 12 years as chairman of the board for CBRE, the world’s largest real estate brokerage; he retired in 2014 but remains a major shareholder. (CBRE is the firm that CCSF Special Trustee Robert Agrella hired to steer the development of 33 Gough St.)

Mayor Lee, with his strong pro-development agenda, shepherded bills through the Board of Supervisors giving tax breaks to Twitter and others; the first three years of the Twitter deal alone cost the city $56 million.9 The Hearst Corporation, owner of the San Francisco Chronicle whose slanted coverage has contributed to the City College crisis (See “Corporate Media Writes the Sound Track for the Attack on City College,” p. 22.), is a major real estate power. The Chronicle Building at Fifth and Mission Streets anchors the multi-million dollar 5M development—going up just a block from City College’s Downtown Campus. And enticing these companies to move to San Francisco without planning housing for thousands of new workers has contributed to the epidemic of skyrocketing rents and displacement.10  ⏤Marcy Rein     ◼︎

1.    San Francisco Board of Supervisors Budget and Legislative Analyst, “Evaluation of the Potential Impact of the Closure of San Francisco City College,” Sept. 16, 2013, http://www.sfbos.org/Modules/ShowDocument.aspx?documentid=46531

3.    David Bacon, “The Corporate Roots of the Attack on Community Colleges,” in Perspective, publication of the Community College Council of the California Federation of Teachers, Vol. 46, No. 2, February 2015, accessed at https://issuu.com/cftpub/docs/cft_perspective_march2015_7, April 23, 2016.

4.    “The university and its owner, the Apollo Education Group, have been subject to a series of state and federal investigations into allegations of shady recruiting, deceptive advertising and questionable financial aid practices.” Patricia Cohen and Chad Bray, “University of Phoenix Owner, Apollo Education Group, Will Be Taken Private,” The New York Times, Feb. 8, 2016, accessed via https://dianeravitch.net/2016/02/10/obama-friends-take-over-for-profit-higher-education-group/

7.    For a summary of actions against Career Education Corporation, see https://en.wikipedia.org/wiki/Career_Education_Corporation; On ITT Educational Services, see the federal Consumer Financial Protection Bureau, http://www.consumerfinance.gov/newsroom/cfpb-sues-for-profit-college-chain-itt-for-predatory-lending/ and the Securities and Exchange Commission, https://www.sec.gov/news/pressrelease/2015-86.html