Paris Agreement is a ‘Dangerous Distraction’ 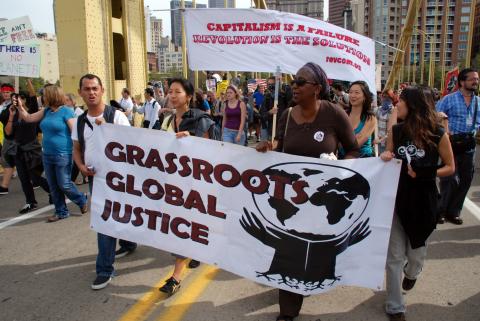 Three major climate justice organizations—the Grassroots Global Justice Alliance, the Indigenous Environmental Network, and the Climate Justice Alliance—organized a delegation to the December 2015 United Nations climate talks in Paris. The delegation, called “It Takes Roots to Weather the Storm,” included more than 100 leaders and organizers from US and Canadian grassroots and Indigenous groups. “It Takes Roots” delegates took part in the talks and helped to lead two weeks of direct action in the streets of Paris. The actions brought the broader movement against climate change into the streets, and also developed new ties among grassroots groups around the world who are united behind the call for “system change, not climate change.” The text that follows comes from the It Takes Roots report on the Paris talks, We Are Mother Earth’s Red Line: Frontline Communities Lead the Climate Justice Fight Beyond the Paris Agreement.

The Paris Climate Agreement of December 2015 is a dangerous distraction that threatens all of us. Marked by the heavy influence of the fossil fuel industry, the deal reached at the United Nations Framework Convention on Climate Change (UNFCCC) never mentions the need to curb extractive energy, and sets goals far below those needed to avert a global catastrophe. The agreement signed by 196 countries does acknowledge the global urgency of the climate crisis, and reflects the strength of the climate movement. But the accord that came out of the UNFCC’s 21st Conference of Parties (COP21) ignores the roots of the crisis, and the very people who have the experience and determination to solve it.

Our analysis of the Paris Agreement echoes critiques from social movements around the world, led by those most impacted by both climate disruption and the false promises that governments and corporate interests promote in its wake.  In order to effectively develop and support our next organizing steps, we must have a clear and honest understanding of the challenges and conditions we are facing. We have five core concerns with the content of the Paris Agreement:

The Agreement relies  on voluntary versus mandatory emission cuts  that do not meet targets scientists say are necessary to avoid  climate catastrophe. The Paris Agreement is not  based on what is scientifically necessary to address the  climate crisis .  The accord contains no binding mandatory emissions reductions—only voluntary pledges from each country, called “Intended Nationally-Determined Contributions .” Taken together, all these pledges would still allow an average global temperature increase of between 3 – 4 °C above pre-industrial levels . Scientists warn that this  level  of warming would be catastrophic  In fact,  the  agreement allows emissions to continue to increase without setting a date by which they need to begin to decrease .  The actual language states, “Parties aim  to reach global peaking of greenhouse gas emissions as soon as possible .”

The Agreement advances pollution trading  mechanisms that allow polluters to purchase “offsets” and continue extremely dangerous levels of emissions. The agreement allows countries to claim reductions through pollution trading schemes written in the  agreement as “results-based payments,” rather than requiring actual reductions of pollution emissions at the  source. The underlying approach of these trading schemes is to create a market for emission credits that allows polluters to continue releasing greenhouse gasses if they can  produce a certificate attesting that they have contributed toward preventing a similar amount of emissions elsewhere, and thus avoid taking action against burning fossil fuels .  An example of what is being traded is a mechanism called “Reducing Emissions from Deforestation and Forest Degradation”4 (REDD+) .  Within climate negotiations, deforestation has become a global issue .  Forests provide vast amounts of carbon sinks that when destroyed emit CO2 into  the  atmosphere .  The loss of these forests, especially in the  Global South, is a major driver of climate change, accounting for roughly a fifth of global GHG emissions .  The Paris agreement approved REDD+ for implementation despite continued debates on how to make forests fit into  a financial carbon market regime with no real guarantee there would be progress in reducing the underlying causes of forest loss .  These carbon market regimes allow for the  privatization of the  carbon in the  forests, and tree plantations, wetlands, agriculture and soils to be used as sponges for mitigating greenhouse gases .  This allows governments and polluting corporations to offset their carbon and other GHGs,  to meet emission reduction targets rather than cut emissions at the  source .

Offsets and pollution trading have a double-edged impact: They  give  polluters in the  industrialized countries of the  North cover so they can  continue to poison the  air and water in the  communities  alongside refineries, coal  mines and fracking wells, and at the  same time in the  global South, including Mexico, these projects can  fail to secure the  rights of local  forest-dependent communities, peasants and Indigenous Peoples to their lands .  Even  where land titles might be recognized on paper, implementation of REDD+ projects that generate carbon credits is likely to lead to these people losing control of their lands, land evictions, and restrictions on entering forested areas .  Current safeguard mechanisms developed have no guarantees for being implemented at the  national or subnational areas of developing countries .  Tradable REDD credits are  a form of property title—privatization .  Those who own the  credit do not  need to own the  land nor  the  trees, but  they do own the  right to decidehow that land will be used. They also usually have the contractual right to monitor what is happening on the land and request access to the territory at any time they choose as long as they own the carbon credit.

The Agreement relies  on dirty energies and false  promises including hydraulic  fracturing  (fracking), nuclear  power, agro-fuels, carbon  capture and sequestration and other  technological proposals that pose serious ecological risks. While  the  fossil fuel industry has tried to position natural gas as a “transitional fuel” and nuclear energy as a green energy alternative, both of these industries carry tremendous risk to surrounding communities .  In 2015,  the  state of Oklahoma was forced to impose a ban on fracking, due to more than 5000 earthquakes in one year, sometimes more than 20 in a single day, directly resulting from extensive fracking operations. The nuclear power industry has seen similar disasters, such as the Fukushima meltdown of 2011. The Paris Agreement focuses on national voluntary pledges of emissions reductions, but not reductions in the extraction of fossil fuels, allowing contradictory practices such as the  Obama administration on the  one hand pledging net  emissions reductions, and on the  other proposing a five-year expansion of offshore oil drilling across the  Arctic and Gulf of Mexico .  A genuine Just Transition requires rejecting dirty  energy and investing in clean and renewable energy sources .

The Agreement weakens or strips  the rights  of reparations owed to the Global South by the Global North.  The Paris Agreement dilutes the  language that until  now has been critical for establishing the expectation that countries that have greater historical responsibility for causing climate change must be held to higher standards for reducing emissions and addressing impacts .  Furthermore, the  Paris Agreement denies the  possibility for compensation or liability for loss and damage done, thus limiting rights of countries or communities impacted by climate change to use legal methods to hold entities accountable for causing their suffering.

The leadership of social movements of Indigenous Peoples, Black, Latina, Asian and Pacific Islander communities, small-scale farmers/peasants and women, and all communities on the frontlines of extraction who have been defending lands, territories, water, forests, the health of their communities and Mother Earth as a whole, is more critical than ever..

In the report, these quotes appeared at the beginning of the section:

“The harsh reality we face is that the very people who have already been experiencing the most frequent and severe climate impacts to date—Indigenous Peoples, small-scale farmers/peasants, women and low-income communities of color, especially in the Global South—will now face even more difficult life-or-death struggles as their lands, territories, waters, and forests could be increasingly privatized and taken away under the mechanisms of the Paris Agreement.” —Chung-Wha Hong and Sara Mersha, Grassroots International

“The Paris Agreement is a trade agreement, nothing more. It promises to privatize, commodify and sell forested lands as carbon offsets in fraudulent schemes such as REDD+ projects. These offset schemes provide a financial laundering mechanism for developed countries to launder their carbon pollution on the backs of the global south. Case-in-point, the United States’ climate change plan includes 250 million megatons to be absorbed by oceans and forest offset markets. Essentially, those responsible for the climate crisis not only get to buy their way out of compliance but they also get to profit from it as well.” —Alberto Saldamando, Human and Indigenous Rights Expert & Attorney

*A version of this story posted earlier today (4.22.16) included text from a pre-release version of the report's 5 points of concern.