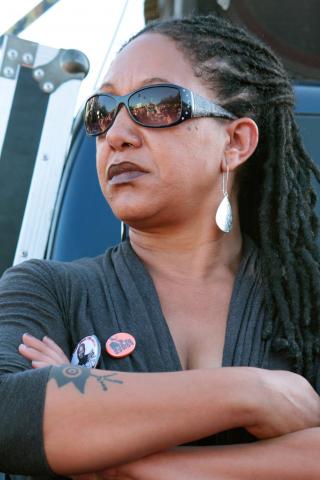 My entire life has been dedicated to art and activism. As a racially-mixed child from a broken home full of various substances—I could have ended up anywhere. But in 4th grade, fate landed me in the classroom of Ms. Barbara Gerhardt. I was angry. I was troubled. I was a disturbance in the classroom. Rather than throw me away—as happens to so many Black and Brown young people in our schools—Ms. Gerhardt found a way to channel all of that misdirected energy into something else. She directed me toward a local theater conservatory. My course was set.

The theater became my refuge. It literally saved my life.

Simultaneously, I was growing up amidst living room conversations about war, sexism and race in a racist, segregated town that let me know I was a “nigger” at every turn. I watched my mother get arrested at actions; sacrifice her life to the struggle. My mother taught me how to fight back, to value resistance.

What this has meant for my life is a deep commitment to the arts, an overstanding of their power to change, heal and save lives, and a passion for the intersection of art and social change.
Rysing Womyn is the manifestation of that intersection.

The Idea
Rysing Womyn works with the women that society is prone to throw away: the angry, the rageful, the sad, the traumatized, the oppressed, the exploited.

When we first conceived of the idea, my co-creator Anna and I had never worked with the commercially sexually exploited (CSEC) population before. We had experience working with youth in juvenile halls or schools, but this would be our first foray with young people who had either been, or ran a very high risk of being sexually exploited. And to put things into perspective, our program was based in Oakland, CA—the Number Two city in the country for trafficking. Among other things, Oakland is known for its ostentatious real-life pimps, major motion pictures about even flashier pimps, and celebrated pimp-tongued rappers, who have made our “tracks” famous for catchy rhymes and hypnotic beats, obscuring the reality behind the tracks in the process.

Anna and I had a lot of preconceived notions about what teaching these classes would be like. We entered into the process with a set schedule, a plan and a performance date. We learned quickly that was a mistake. Working in this environment, with these girls, meant being flexible and responsive to the sometimes highly dramatic and emotional situations which arose. In addition to teaching theater, we needed to be a shoulder to cry on, or an ear to listen.

Sometimes, the entire class became about one young woman who simply needed someone to hear her. Other times, we taught classes where just one girl showed up, or where we had more girls than we knew what to do with!

The Rysing Womyn curriculum uses political education as a tool of empowerment and theater exercises and journaling as tools of creative expression to help girls and womyn find–and utilize–their voice. We offer a megaphone to amplify voices that society drowns out with judgment and condemnation. We unearth their stories and provide a platform to tell them. We arm young womyn with the truth—about their history, strengths and power, interrupting the dialogue of “you are not enough” or “you don’t belong.” 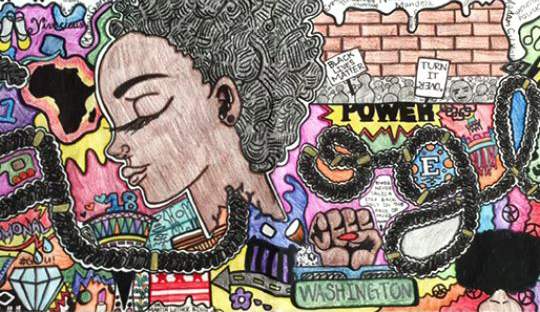 The Work
Class consists of grounding and meditation, followed by an introduction to a political or artistic figure they can relate to. We have covered everyone from Audre Lorde to Assata Shakur. We want them to see themselves in these giants and know that they can aspire to be their own versions of these womyn.

Following the grounding, we read a poem or listen to a song. We analyze the lyrics and words, identifying the pieces that resonate. We have spent a lot of time with Maya Angelou’s Caged Bird. When have they felt like a caged bird? What does freedom feel like? That is the writing prompt. Don’t think. Just write. Don’t judge. Just write.

Next, it is time to get up and do improv exercises in which the young womyn create scenes related to their writing, performing for each other. We have a segment on police brutality where we learned about Natasha McKenna, Guadalupe Ochoa and Kayla Moore—women who look like them who were murdered by police. There is often no room for women in society’s conversations about police brutality. While Black and Brown women–especially these women–know they are walking targets for law enforcement, there is little room for them to sit in their fears and share their experiences.

The group closes with a check-out. The work can be traumatic, triggering feelings, fears and flashbacks. We find ourselves asking: How are you? Who needs extra time? How can we support the internal work you were so courageous to push through today?

It’s pure beauty when these young womyn walk into the room every week. Laughing. Cussing. Fussing. Playing. Ready to work. Happy for this refuge.

It has been an incredible journey with ups and downs. There is one young woman, the youngest in the group. I only know bits and pieces of her story. I remember her first day. She wore her rage like a fashion statement. Long, red nails. A perfectly painted pout. She didn’t want to be there. She had already done these exercises. She didn’t want to talk about her feelings.

But she came back.

Little by little, she came out of her shell. Writing. Performing. Wearing her pride now like a fashion statement. Showing us the cute white sweater and perfectly ripped jeans she bought that day with her case manager.

Then one day—she went there. Out of the blue, this guarded girl suddenly became an open book. Pouring out her story, gritty detail after gritty detail, after painful moment. It was a breakthrough; we had earned her trust.

The Learning
We were not prepared for the impact it would have on her. We’re actors and teachers. We hadn’t thought about the fact that she had to go home with all of that, to an environment that didn’t support her and people that couldn’t be bothered. The next week she showed up, triggered. The thought of being in class triggered her. She didn’t want to go there again. She just wanted to watch. But we are not there to watch. Everyone has to participate so everyone feels safe. We gave her three choices: She could go home. She could do the writing prompt at home or she could stay and push through. She chose to stay. We knew she could. She produced some of the most beautiful work that day. More importantly, she learned that she didn’t have to run away from her darkness. She could work through it. With writing. With acting. With her sisters.

Over the last few months, we’ve seen the young women bloom. The same women, who at the beginning of the program didn’t even want to participate, have turned into the young ladies who make sure to never miss a class. Young women who walk into class angry and righteously frustrated show up and work hard not just for themselves, but for their sisters. Young women who before the class didn’t know who Maya Angelou is can now quote facts about her life. They now know she was a prostitute who became a prolific writer and civil rights activist.

I have been blessed to experience young women who write and read some of the most beautiful, raw and heartbreaking words I have ever heard.“You wouldn’t know cause you don’t walk in my shoes. You don’t know my pain. So f@$$ that ‘this is what I would do’. How would you feel if he took his gun and aimed it at you?”

It is an honor to work with these womyn. It demands we show up to every class with our best selves, our whole selves. Is it working? Will theater and writing save their lives? Will it give enough meaning to their lives to change their existence? We don’t know. All we know is for two hours a week, they have somewhere safe to go where they are guaranteed to be seen, heard and loved.
In Rysing Womyn, they are making good decisions, experiencing healthy relationships with other women, earning money in a safe and productive way, and learning about people and events and history they never would have learned about in school. That’s got to count for something. It has to make a difference. I think sometimes of my old 4th grade teacher, and the difference she made in my own life—just by nudging and encouraging my creative side. Hopefully, we are their Ms. Gerhardt.

Dazed and Confused
My stepdad told me God was the most mad at me well fuck it cause I’m mad at him too
He playin tricks with my mind but mad I’m stuck in the loop
Then wanna send me straight to hell cause Adam tossed me his fruits
He let em rob me of my innocence at the tender age of two
They saw my walls wouldn’t fall snuck in and pillaged and looted
They tried to end my revolution but I made it right through
I tried to end my revolution my brother walked in the room
I don’t wanna feel the pain mama I need weed I need booze
I wanna feel everythang daddy I need dick I need you
I been a loner since my twin lost his life in the womb,
I ain’t no stoner just a lover of that flower perfume
Niggas claim they’ll stick around but they ain’t tape they ain’t glue
My soul is calloused
You wouldn’t know cause you don’t walk in my shoes
You don’t know my pain
So fuck that “this is what I would do”
How would you feel if he took his gun and aimed it at you
How would you lie just to cover up the scratches and bruise
How would you cope if yo soul was still stuck in that noose
Fuck you cause you’d be just as dazed and confused

Cat Brooks is the co-founder of the Anti Police-Terror Project, co-chair of ONYX Organizing Committee and an active member of the Black Lives Matter movement.

END_OF_DOCUMENT_TOKEN_TO_BE_REPLACED
The Earth Is the Only One Telling the Truth