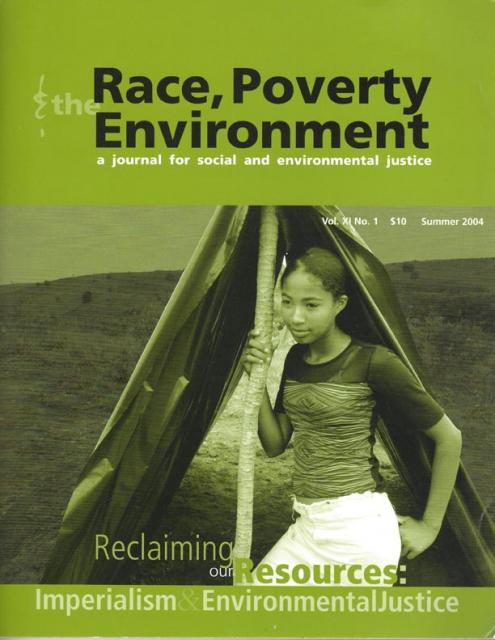 Reprinted from RP&E Volume 11, No. 1: Reclaiming Our Resources—Imperialism and Environmental Justice

The word “imperialism” is back on the radar of political discourse, after lying dormant for many years, thanks to the Bush administration’s willingness to throw the weight of the United States around with abandon. Imperialism is a useful word. Just as the concept of “internal colonialism” was helpful to people thinking about power and injustice in the 1960s, imperialism can be brought home to good effect for today’s activists and movement leaders. But as an analytical term, it needs to be deepened beyond sweeping statements like, “U.S. imperialism is ravaging the globe”—which are so broad as to be mere slogans—if we are to apply it to conditions of race, poverty, and the environment in California and nationwide.

Imperialism is, above all, a geographic term: the power of one place over another. In the modern world, it came into use to describe the power of the great European countries over far-flung empires in Asia, Africa, and the Americas. That power was expressed most clearly through political control of territory, or colonization, but it pertained as well to the domination of trade, taxation of the people, land takeovers, and extraction of natural resource wealth. Such exploitation was economic in the broadest sense and not confined to the state and government power. The British Empire was created to advance the cause of capital accumulation, not simply to bring glory to queens and admirals.

Internal Conquests
But imperialism can operate at many scales (geographic areas) and need not be thought of only as external domination. The United States was formed as a continental empire by conquest, which devoured large pieces of the land across the center of North America and absorbed them into one nation-state. This still explains much of the misery of indigenous peoples, whose land was stolen and cultures nearly decimated in the process of Euro-American expansion. It pertains to the tension that underlies Mexican-Anglo relations to this day, due to the historic memory of U.S. conquest of one-third of Mexican territory in the war of 1844-46. That conquest was motivated in large part by the attraction of vast lands for agriculture, mining, and timber. California was the great prize of the Mexican war, yielding up its gold to fuel the appetite of the growing American economy for money in circulation.

California, and particularly San Francisco, then turned around and projected their economic might across a regional empire up and down the Pacific Coast and stretching across the Pacific. This constituted an urban imperialism that sucked the wealth out of the countryside in many forms: silver from Nevada, wood from the Northwest, beef from Southern California, sugar from Hawaii, and commercial and financial profits from every direction.

Cities are huge consumers of natural resources to this day. The tentacles of cities like Los Angeles and Denver reach out hundreds of miles to gather water, electricity, and building materials, and thousands of miles to garner their supplies of oil, gas, and food. When we speak of the United States gobbling up a quarter to a third of the world’s natural resources today to feed its vast appetite for materials and energy, we should remember that a state like California or a city like San Francisco has its own geography of extraction. The legacy of this has been the ruin of many distant places—from Nevada’s ghost towns to Chevron-Texaco’s oil wells in Ecuador—by mines, clear cuts, or oil spills.

This kind of imperial economic conquest and exploitation operates all the way down to the level of neighborhoods and municipalities within today’s huge metropolitan cities. We hardly notice it, but the urban landscape is littered with sites of resource extraction, like the sulphur mine in the Oakland hills, or New Almaden above San Jose, which still leaches mercury into the estuary and makes offshore tuna and crabs dangerous to public health. We also suffer Silicon Valley’s past leakage of cleaning fluids into the groundwater, a legacy of the conquest of Santa Clara County by the electronics industry. The people of Contra Costa County live with the deadly emissions of several refineries turning distant petroleum into locally-consumed gasoline.

Real estate is a critical dimension of internal imperialism, as well. When San Francisco and other Bay Area cities wanted to expand their business, industry, transportation, or housing, they eagerly conquered new space by such devices as filling in the bay, bulldozing hillsides, and even removing the dead outside the city limits to claim the cemeteries. After World War II, the downtown real estate operators looked to the surrounding neighborhoods for potential office and commercial space.

This development marked the era of “urban renewal” projects that devastated historically working class, poor neighborhoods around downtown San Francisco, such as the Western Addition, South of Market, and North Beach, driving out many of the poor and people of color. That process of internal conquest continues to this day, as in the dot-com explosion that made over South of Market, chipped away at the Tenderloin, and encroached on the Inner Mission, leaving many more homeless. A similar process leveled much of central and west Oakland after the war—with a comparable targeting of black neighborhoods—and continues through Mayor Jerry Brown’s campaign to gentrify the central city.

The People Behind Empire
Of course, these instances of local, internal imperialism are not just about places, but about people. Imperial powers are not just national or local governments, but the people behind them. Powerful people, rich people, and most often, in the American case, white people. The Bush Team is not the exception but the rule in that regard. We may think of California politics as more liberal, and the Bay Area as far more liberal than the nation, but when it comes to those at the top of the local business and political hierarchy, their command over space and place is just as fierce and unrelenting as any Bush incursion into Iraq.

The litany is long of business and political leaders  who have led the conquest of local real estate and urban supply lines for profit and prosperity. Among the most famous over the years are the Phelans, Hearsts, DeYoungs, Knowlands, Pardees, Swigs, Shorensteins, and McEnerys. This is not a matter of leading individuals or families, however, but of the leadership of a class. The bankers still need their gleaming skyscrapers, professionals their loft condos, electronics moguls their electricity supply, rich suburbanites their water, business travelers their expanded airport (by bay fill, of course). This class of people is not confined to downtown, by any means, but lives and works throughout the metro area. They guard their geography well, with gated communities like Blackhawk, mansions hidden in the woods in Marin, carefully drawn boundaries like Piedmont. Would that the poor had such privileged access to space and power over their homes and workplaces. They live within the empire but without it at the same time.

R. A. Walker is professor of geography at the University of California at Berkeley. He is the author of several articles about the San Francisco Bay Area. His book, The Conquest of Bread: 150 Years of California Agribusiness was published by The New Press in 2004.